The rise of the food truck in Buffalo has happened simultaneously with the renaissance of the city around it. In a way, they’ve become a symbol of the New Buffalo.

But nowhere has the humble food truck had more of an impact than at Buffalo OutFront Metalworks. The metal fabrication shop began retrofitting old trucks into rolling, restaurant-grade kitchens in 2010 when it made a taco truck for Lloyd. In 2013, Howard and Leslie Zemsky commissioned Buffalo OutFront to convert a 1964 Airstream camper into the Square Sandwiches food truck. Word of mouth traveled and more entrepreneurs came looking for food trucks of their own.

[PHOTO GALLERY: The making of a food truck]

As of 2012, the company at 50 Wecker St. on the East Side did a modest $25,000 in food truck work. Today, its custom food truck division has spun off into a separate company and estimates it has done $4 million in business for 2016. They’ve done about 50 trucks for everyone from Chef’s, Ted’s and Anderson’s to Just Pizza, 716 and Cheesed and Confused. They’ve shipped trucks as far as Colorado, Texas and Florida. Finished trucks can cost anywhere from $15,000 to $70,000.

Buffalo OutFront employs 40 people at its 60,000-square-foot facility. In addition to its traditional metal fabrication, design and prototyping, it has a custom built displays division that makes hot and cold food bars for grocery stores such as Tops and Wegmans.

In the past, customers who wanted a food truck would buy used or new trucks elsewhere and bring them to the company to have them retrofitted. But Buffalo OutFront now keeps trucks in stock, which it buys at auction in Canada. Customers choose the size of the kitchen they want in the back of the truck (14 to 22 feet are standard sizes) and workers design the layout by sketching out where stoves, sinks, countertops and cupboards will go. 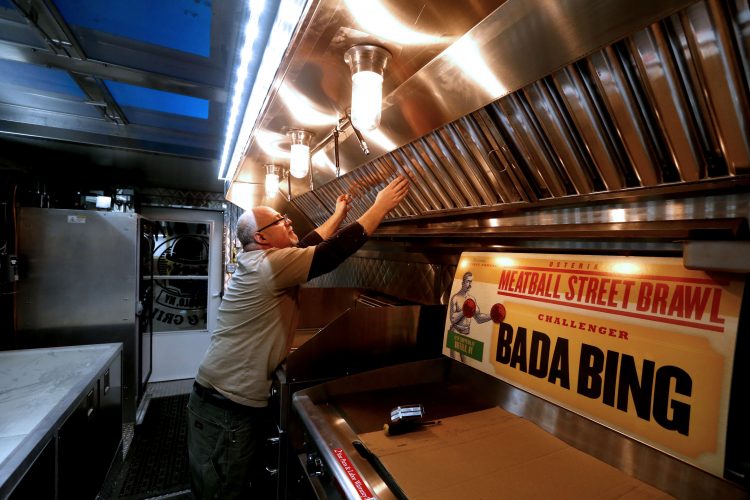 Once the truck is completely gutted, workers put down plywood templates of the equipment that will be installed later and call the client in to be sure the interior layout is what they want. Is the traffic flow going to work? Is the guy on the fryer going to be too close to the guy at the cutting station?

“You’d be surprised, about 90 percent of the time, the layout changes,” said Dave Myslinski, general manager at Buffalo OutFront. “You don’t want to build a truck twice. It’s better to take the extra day to lay everything out with the customer and make sure they’re getting everything they want.”

Then it’s time to reframe the walls and put up new quilted stainless steel ones that look immaculate and are easy to clean. The floor gets covered in Diamond Plate metal, which has raised bumps to prevent slips and falls. Workers cut out a service window where the food will be served and can cut out a skylight, if the customer wants one.

The truck is then filled with all the equipment that will make the culinary magic happen – the exhaust hood, stove, oven, deep fryers. The gas lines, electrical system, generator and fire suppression system are added.

The truck is then taken to Streamline Graphics in North Tonawanda to be wrapped in the restaurant’s logos, and it’s off to the health department, fire department and county for inspections.