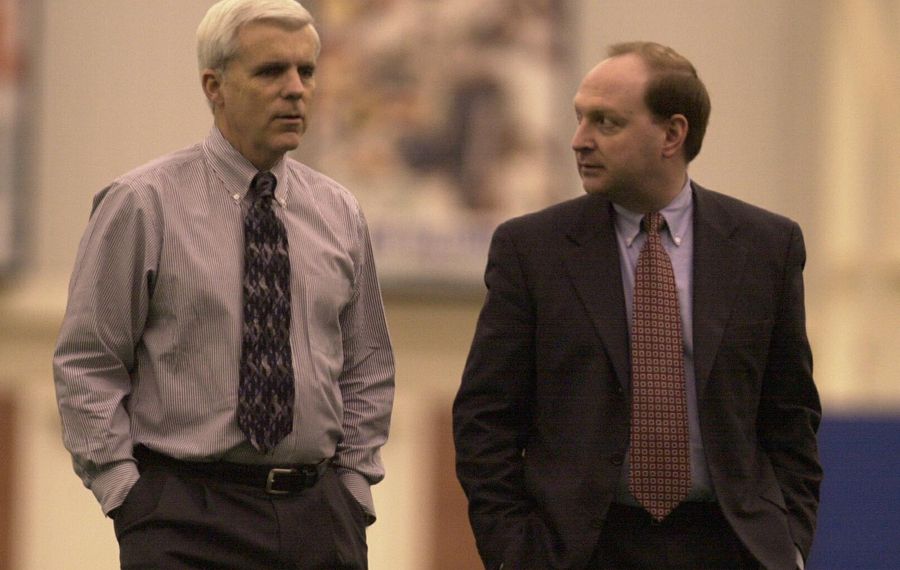 The mail flow was brisk this week, though a trifle disappointing. I asked if people were rooting for Serena or Venus Williams in the women's final of the Australian Open. There wasn't a single question about tennis.

Come on, it's the biggest story in sports this weekend, far more significant than the NFL and NHL all-star games. When you include the men's final between legendary rivals Roger Federer and Rafael Nadal, it ranks as one of the most compelling finishes in Grand Slam history.

It's the first all-Williams final in eight years, with Serena looking to win her 23rd Grand Slam singles title and pass Steffi Graf for the most in the open era. Federer, 35, the oldest man to reach a major final since Ken Rosewell in 1974, is seeking his 18th slam singles title, Nadal his 15th.

The women's final airs from Australia on ESPN at 3 a.m. Saturday morning, the men's at the same time on Sunday. I'll have to remember to record both. On to the Mailbag:

Knight-Errant asks: Both should be fired, but who is actually responsible for financial debacles like Tyrod's contract and the Hogan blunder, Doug Whaley or Jim Overdorf?

Sully: It's fair game to criticize Overdorf, the Bills' vice president for administration. He's been handling cap and financial issues for the entire playoff drought and isn't immune from blame for the chronic mismanagement.

But Overdorf doesn't have power over football decisions. That belongs to the general manager and owners. So Whaley and the GMs who preceded him are far more responsible for dubious personnel issues that have set the team back over the years.

Overdorf does negotiate contracts and deal with agents. He knows what certain players command and how signings will affect the salary structure. Financial balance is critical in the NFL, so his role is vital. But ultimately, player decisions come down to the man running the football operation.

Does that mean Overdorf is absolved from bad personnel decisions? No, it's his job to say that a player isn't worth the money, or the roster is top-heavy, or a big contract could hurt them with dead money later. The team should have protected itself with a behavior clause in Marcell Dareus's $100 million contract. And the Taylor deal wasn't as team-friendly as it seemed at the time.

Like a lot of folks at One Bills Drive, Overdorf is fortunate to have survived in his job for this long. But it's a big stretch to say he's as culpable as Whaley and ownership for the team's current plight. In the end, he follows orders.

Sully: Here we go. Evander Kane lives up to his talent and reputation for six weeks and the apologists rise up to declare the Sabres the winner in the trade. Kane has been terrific lately. He has scored 14 goals in his last 25 games – after scoring 20 in his first 77 games with the Sabres.

Kane's raw talent was never the issue, but his consistency and character have been. He has scored more than 20 goals once in seven seasons. Does a hot streak erase the fact that he has embarrassed the organization with his public behavior on more than one occasion, after being essentially pushed out of town by his teammates in Winnipeg?

Yes, I still think Murray gave too much. To refresh, Winnipeg sent Kane, Zach Bogosian and the rights to Jason Kasdorf to the Sabres for Joel Armia, Tyler Myers, Drew Stafford, Brendan Lemieux and a first-round pick. That's a bundle.

Myers (who has been hurt for much of this season) had worn out his welcome in Buffalo, but has been a solid, 20-plus minute D in Winnipeg. He's much better than Bogosian. The Jets are happy with Armia as a third-liner. Murray also gave up a high second-rounder in Lemieux and a first-rounder, depleting his organizational depth.

This isn't about current goal totals. It'll be a good trade for the Sabres only if Kane plays like a star for the rest of his career in Buffalo and stays out of trouble off the ice. Let's wait and see how it plays out.

@kevinleters asks: Do you think it's possible that the Bills draft a QB at 10, and still kept Tyrod? Cardale and new QB should be ready in 2 years.

Sully: I'll give you credit for creative thinking, but that's an outlandish idea. There's no way Taylor and his agent would come back to the Bills with the future QB waiting in the wings. If they take a quarterback in the first round, it's because they're making the wise decision to start over.

If they keep Taylor, it's with the expectation that he's their franchise guy and they think they can win with him right away. In that scenario, they would be looking to upgrade at another position with the 10th overall pick.

Rick McGuire asks: The MLB season is quickly approaching. Who do you like this year to take it all? I think my Cubs will have a hard time repeating.

Sully: When do pitchers and catchers report? I can't wait. I wouldn't be so pessimistic about your Cubs. They're the team to beat in the NL. Any team with Kyle Hendricks, Jon Lester and Jake Arrieta as their top three starters will be tough to beat. Their young offense will only get better.

Not to sound like a fan, but I love the Red Sox in the AL, despite the retirement of David Ortiz. It's all about starting pitching with me. They're the only team that can stack up with the Cubs, having added Chris Sale to Rick Porcello and David Price.

I'm back to where I was in 2003, when I predicted the Red Sox and Cubs to make the World Series. It still bugs me that both teams came within five outs before blowing it in their respective championship series.

Tbroown@aol.com asks: Soccer-style kickers are definitely longer than straight-ahead guys but their kicks tend to hook or fade. For chip shot field goals would it be better to use a straight guy?

Sully: Interesting notion, but teams aren't going to carry a second kicker to make chip shots. And considering the high conversion rates of all NFL kickers nowadays, I can't say a straight-in kicker would do any better.

Are they any qualified straight-on kickers out there? There hasn't been a regular straight-on NFL kicker since Mark Moseley retired 30 years ago. How come no one kicks that way anymore? Someone tell me for the next Mailbag.

@PlaunPlovecho asks: Who is your pick to win the Pro Bowl?

Sully: I would have to care to pick a winner. Last I checked, it wasn't one of our Staff Pick selections. Why should I care about the Pro Bowl if so many of the players don't? There were 37 players who refused invitations this year.

I'd say the winner is any player who gets through the game without getting injured. Also the advertisers, because people still watch it for some reason – though ratings have been sluggish in recent years.