George Smith has seen some monster snowfalls in Western New York. A little more than two years ago, when parts of the region received up to seven feet of snow in an almost unimaginable November storm, Smith stumbled and fell while walking across the back yard of his Southtowns home.

Now in his 70s, he copes with stenosis of the spine, a degenerative condition. The snow was so deep, he said, that when he fell down, "I didn’t know if I could ever get back up.”

It was a frightening moment amid a storm in which the sheer volume of snow made history.

Still, even by that standard, Smith said he never witnessed anything that compares to the elemental violence of the great blizzard of 1977, in Buffalo.

“That wind, that howling, that noise,” said Smith, a retired lieutenant with the Buffalo Police Department. “It got to the point where people didn’t care about leaving their cars out there. It was life or death. It was like being out on the ocean, and the only thing you cared about was getting to the shore.”

Every generation has epic moments that in memory, over the years, can expand into tall tales. Decades later, we tell our kids or grandchildren they’ll never see anything like it in their lives, even if – truth be told – they most probably will.

The blizzard was different, the rare event when words cannot fully do it justice. It was not a storm so much as a natural assault. The most brutal winter in Buffalo history seemed to come together in a few days of savage, unrelenting fury from Lake Erie. Fierce winds picked up snow that had piled up for weeks on an ice-covered lake.

The bull's-eye for those winds: Buffalo.

Near the center of that bull's-eye: The lakefront, and the Skyway. 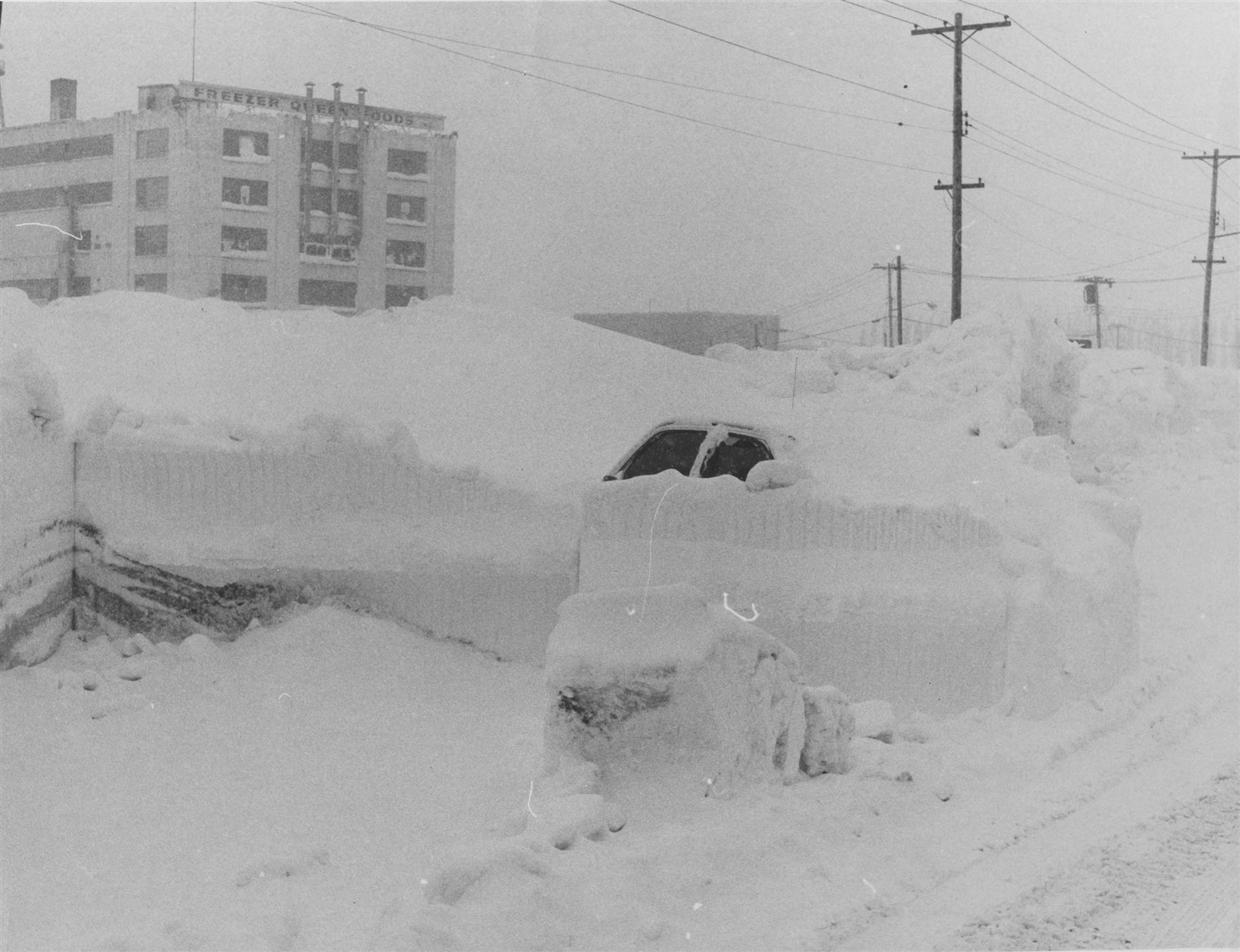 A car buried in snow near Fuhrmann Boulevard, great blizzard of 1977. Buffalo police officers, in the heart of the storm, scrambled to rescue motorists trapped in their cars. (File art/The Buffalo News)

Smith and his longtime partner, John O’Rourk, were among the officers sent to that area on the night the storm engulfed Buffalo. They were hardly prepared for life-threatening conditions. They wore gloves, their uniforms, their police jackets. The one advantage they brought to an unexpected crisis: They'd built a bond established by working side-by-side for many years.

"I could start a sentence and (O'Rourk) would finish it,”  Smith said.

Even now, in their 70s, they get together a few times a year “to drink coffee and tell lies,” as Smith puts it.

During the blizzard, everyday travelers driving toward the Skyway – people well-versed with driving in typical winter storms – never knew what hit them. They were trapped, forced to watch as their idling cars burned gasoline, as fuel needles dropped toward empty on their dashboards.  Ice combined with the driving snow to form hard shells over motionless vehicles.

O’Rourk, raised in South Buffalo, said he and Smith initially were ordered to set up roadblocks that would funnel drivers onto Tifft Street as they got out of work, hopefully preventing them from getting into trouble in the storm.

The officers set up the roadblocks. But the trouble had already arrived.

He maintains his memory is not what it was, affected in retirement by a massive heart attack that at one point left him in an induced coma for 11 days.

Maybe so. But his memory of the blizzard, which was roaring 40 years ago this weekend, seems exactly on target.

It was the night “all hell broke loose,” as Smith puts it.

He and O’Rourk couldn’t anticipate how the storm would last for days, how it would eventually be linked to 29 deaths – including at least nine Western New York motorists who froze while trapped in their cars. That number almost certainly would have been worse if not for the rescuers sent into South Buffalo.

All O’Rourk knew was that the wind was blowing so hard - so choked with snow he breathed it in like air - that he could only see a foot or two in front of him. As he and Smith drove through city neighborhoods, O'Rourk had to hold onto the door of the patrol car to keep it from blowing open.

What started as simple traffic control quickly turned into a lifesaving mission. When O’Rourk and Smith left their vehicle, they discovered a line of stalled and snow-covered vehicles along the Tifft Street ramp to Route 5 and the Skyway. The officers spent hours leading terrified, exhausted motorists to safety, using a rope to keep everyone together, telling civilians to hold onto the people in front of them so they didn’t wander off to sure death in the blinding snow.

“I can’t tell you, with how many people, we had to bang on car windows or on the hoods to wake them up and get them out,” Smith said.

The officers ferried them to someplace warm, either to such nearby restaurants as the old Nick's Texas Hots or the Wayside Family Restaurant, or to a kitchen at what was the Holy Family school, now converted into apartments.

O’Rourk and Smith were photographed afterward at their station house with Duane "Dewey" Bonamici, a fellow officer, all of them carefully putting car keys they'd removed from abandoned cars into envelopes marked with the matching license plates.

Bonamici died in 2005, at 61, of a heart attack. His widow, Marlies Bonamici, said he died on the day before their daughter Ginger's wedding. Yet he helped create similar moments for generations of Western New Yorkers. Bonamici's obituary noted that he played a role in saving dozens upon dozens of civilians, in the blizzard.

One rescue in particular placed Bonamici in the national spotlight. It also made him a central figure in “The Blizzard,” a book about the storm by author Robert Bahr.

According to Bahr’s account, Bonamici and Officer Joe Weber were helping motorists find a way out of the storm when some instinct caused Bonamici to walk ahead, into the fury sweeping across a Skyway entrance ramp, toward an area that no one had ordered him to check. He came upon a small green car coated with ice and snow. Bonamici attempted to pull open the door. It wouldn’t budge. He looked through the window and could see nothing except frost and shadow. 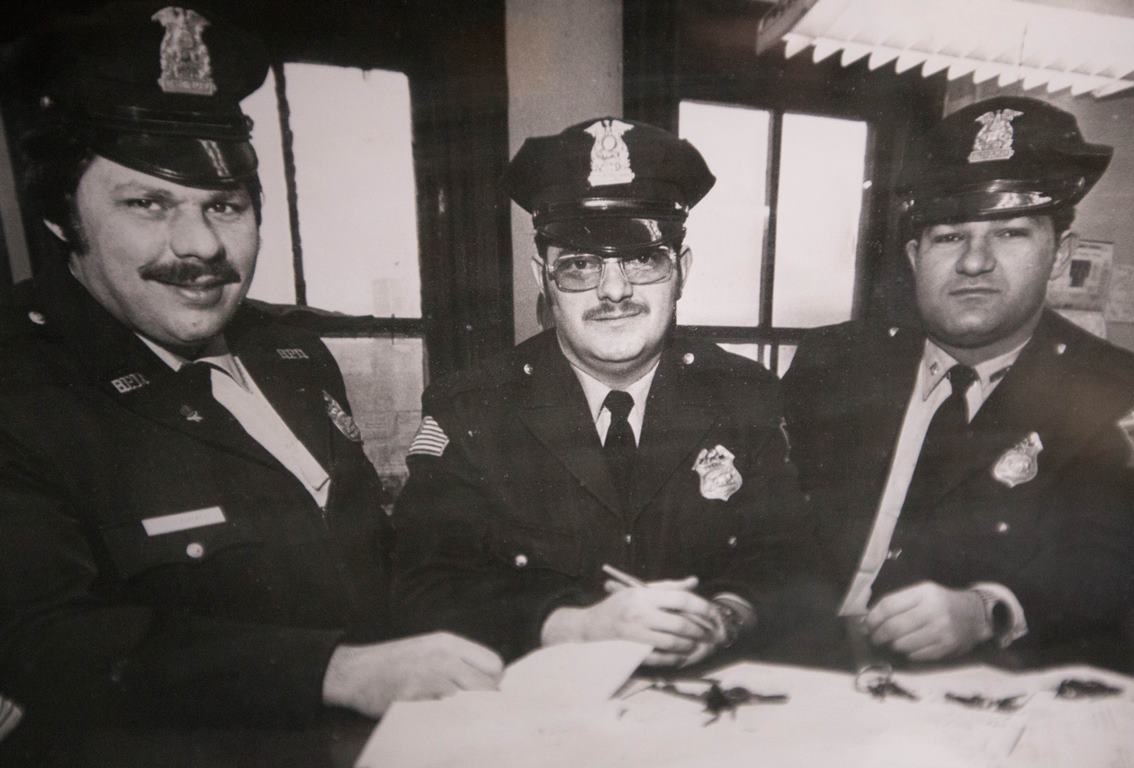 A 1977 photograph of Buffalo police officers, from left, Duane "Dewey" Bonamici, John O'Rourk and George Smith, with keys collected from stranded motorists during the Blizzard of '77. (Photo courtesy John O'Rourk)

Again, some police instinct warned Bonamici not to leave. He got out his flashlight. He put it against the window and saw a young man, apparently unconscious, crumpled in the seat.

Bonamici, frantic, began pounding on the vehicle and screaming at the man, who finally woke up and managed – with Bonamici's help – to push open the door. Trapped in the storm, the man had waited there until his gasoline ran out, until the heat shut down in the car. Bonamici dragged him out and half-carried him to a tractor-trailer, idling nearby.

The driver who offered the shelter of his truck was Charles Zerilli of Grand Island, who died last summer, at 82. His widow, Mary, said she met Zerilli when she was 16. She was working at Mesmer’s Dairy. Zerilli was a young soldier from Staten Island, stationed on Grand Island. They fell in love and he decided to stay in Western New York, where he became a truck driver who happened to be stuck in the road in Buffalo during the great blizzard of 1977 ….

When his warm cab helped the police to save some lives.

Over the years, he never made that big a deal of what he did during the storm. Marlies Bonamici said it was the same way with her husband, an officer who fell and struck his chin on a highway guardrail during the blizzard, leaving a scar as a permanent reminder of what happened that night. It was the same way, again, with countless Western New Yorkers who looked beyond themselves during the blizzard, who went out of their way to take care of their neighbors.

They saw it, then and now, as what you do in Buffalo.

According to several documents, the young man Bonamici saved is now in his 60s and living in the Southtowns. His life was extended for another 40 years because a stubborn police officer – alone in a terrifying storm – made his way to a vehicle, lost in ice and snow, that Bonamici easily could have written off as abandoned.

"There's no doubt," Smith said, "that Dewey saved his life."

A call this week to that Southtowns residence was answered by an older man. He said the person rescued from the storm chooses not to talk about the terror of that night.

“He just wants to get beyond the blizzard,” the man said.

Exactly. Dozens of motorists snared in the core of a pitiless storm managed to get beyond it for one reason:

In a blinding wind strong enough to kill, a handful of weary rescuers refused to walk away.

Sean Kirst is a contributing columnist with The Buffalo News. If you have thoughts or memories of the great blizzard, you can leave them below as comments, or email Kirst at seanpeterkirst@gmail.com. You can also read more of Kirst's work in this archive.