If you’ve ever been swamped in the crush of incoming passengers and outbound travelers in the main lobby of Buffalo Niagara International Airport, that is about to change.

And if your trip home was ever delayed by an antiquated baggage system with its stops, starts and breakdowns, that too soon will be improved.

Much of how we view the Buffalo airport today will be transformed by 2019 through a $65 million renovation and reconfiguration that gets underway this fall.

When completed, passengers leaving planes will walk through new exits in both east and west concourses.

Guided by forecasts of increasing traffic fueled by local and Canadian air travelers, the Niagara Frontier Transportation Authority is embarking on a two-year airport construction period as the next step of a more than $400 million master plan that spans another 15 years.

“Why now?” asked William R. Vanecek, director of aviation for the NFTA. “Because if we don’t prepare for the future now, we won’t get the increased service we can realize.” 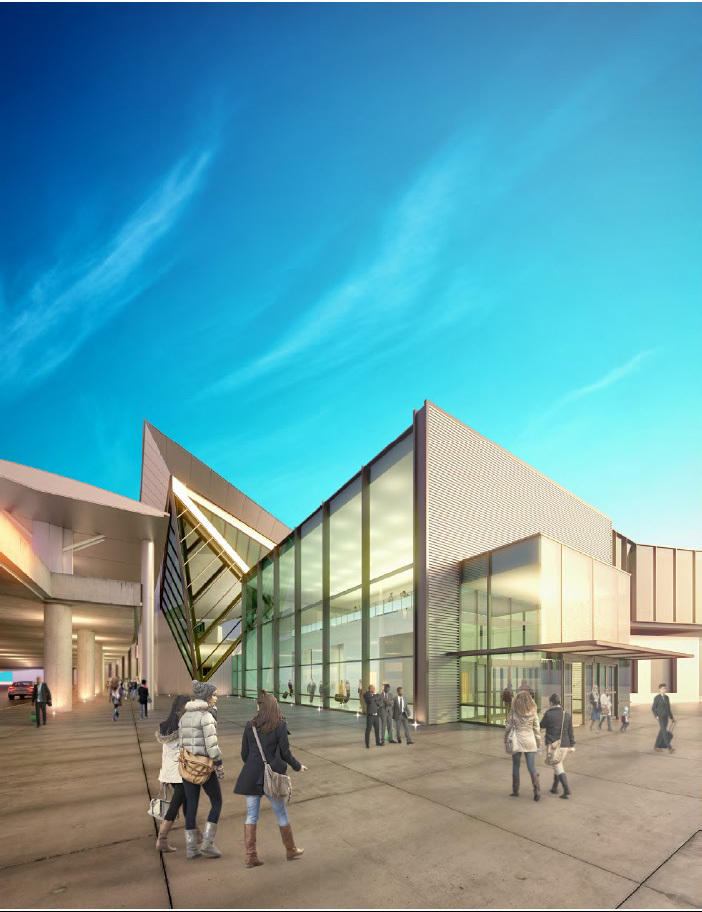 A rendering of the expansion plans at the Buffalo Niagara International Airport.

The next phase of the airport features:

• New curb space at both ends of the terminal, considered a premium at BNIA.

• A new internal traffic pattern eliminating the necessity of security escorts for visitors to airport offices.

• A centralized play area for children, along with a tech center providing work space and cellphone charging.

• A new and protected bus waiting area on the lower level.

Regulatory approvals still lie ahead, but no real hurdles are expected, said Kimberley A. Minkel, executive director of the NFTA.

Most of the project will be funded by passenger facility charges tacked onto each ticket bought at the airport along with NFTA dollars and a possible state contribution, she added.

Buffalo airport numbers have fluctuated with the ebb and flow of Canadian customers, attracted by proximity, lack of congestion, attractive fares, ease of parking and other features. At the peak of cross-border travel in 2012, 5.2 million passengers used the airport.

Even with a devalued Canadian dollar, just under 5 million passengers traveled through BNIA last year. While earlier surveys calculated nearly half of the airport customers originated in Southern Ontario, Vanecek says newer and more sophisticated methods now peg Canadian use at around 30 to 35 percent – still a significant portion of the customer base.

The Canadian dollar is experiencing a slight uptick in recent weeks, Vanecek noted, and that means cross-border airport use will start creeping up too.

“That’s a good signal, and good for us to do this work now while we’re not bursting at the seams,” Vanecek said.

Even in down times, he added, BNIA must prepare for when the Canadian dollar’s value will send a steadier stream of travelers into Buffalo.

The work also prepares for the possibility of nonstop flights by foreign airlines to BNIA, especially as some carriers express interest in mid-size Northeast airports to escape congestion in New York, Boston and Philadelphia.

“They have shown interest, and it’s a very strong possibility over the next year and a half,” Vanecek said. “All of this is helpful to our case. And they wouldn’t be talking to us if they weren’t interested.”

Minkel added that the project’s price tag grew by $17 million because of the increasing possibility of international flights and the need for the new walkway at the international arrivals area on the west concourse. 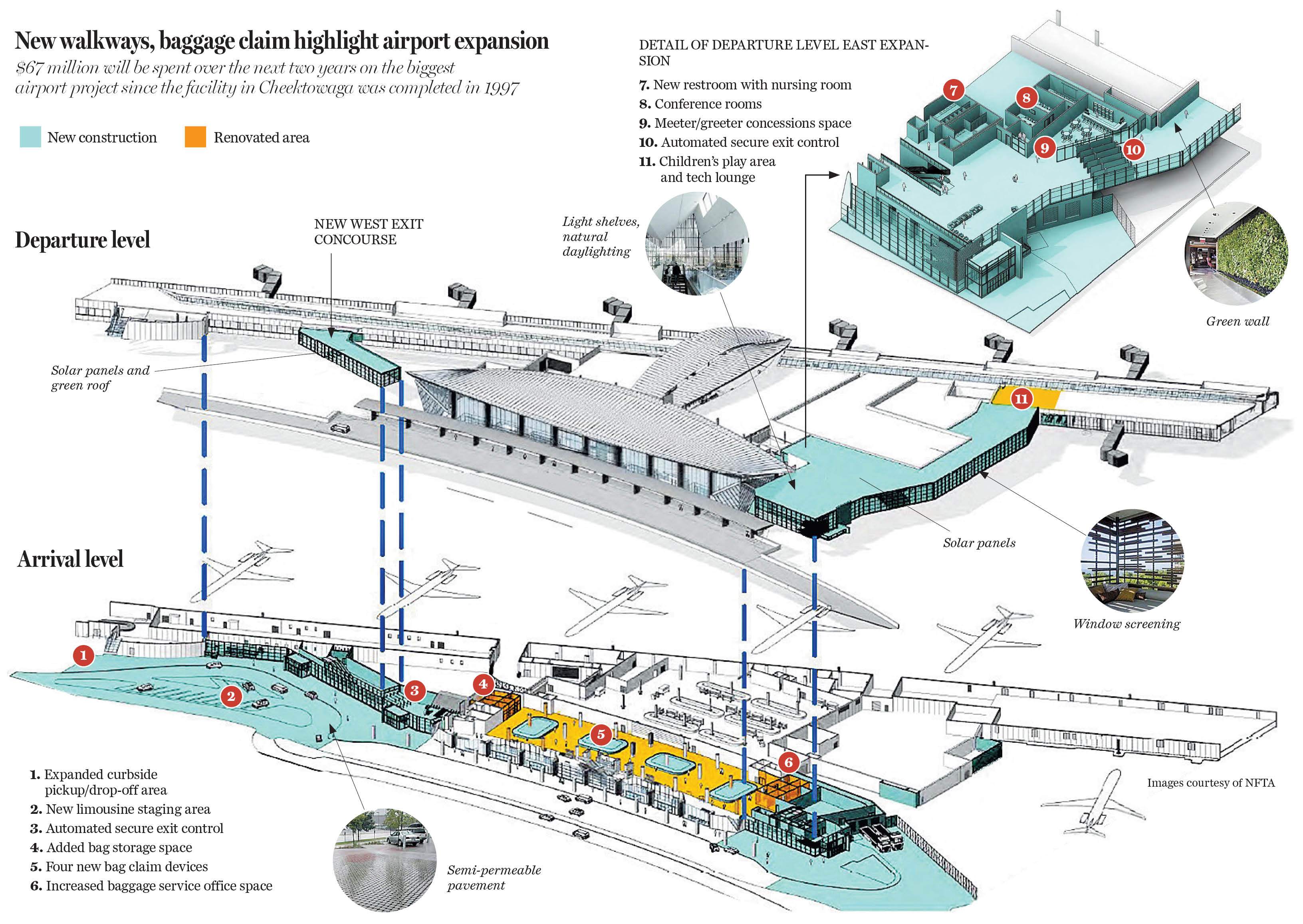 The new exit walkways for deplaning passengers may be the most noticeable improvement coming.

Travelers will now be rerouted away from the central terminal area into new passages leading to baggage claim escalators, with an expected relief from the congestion in front of the second-floor elevators.

“Right now, there’s limited space there for the people waiting to pick up friends and family,” Minkel said. “It’s just too cozy now, especially when you’ve got little kids waiting to pick up gramma or grampa. This will also separate the arriving and departing passengers.”

The new walkway structure for the west end will better accommodate international arrivals who must now walk outside to reach the baggage area after clearing Customs, Minkel said.

“It’s not a good situation,” she said. “It works, but we can certainly make the passenger experience better, and that’s the goal of this project.”

Passengers exiting JetBlue and other planes on the airport’s east concourse will directly reach the main terminal and downstairs baggage claim along a foliage-lined path.

“It will be very seamless for our customers,” she said. 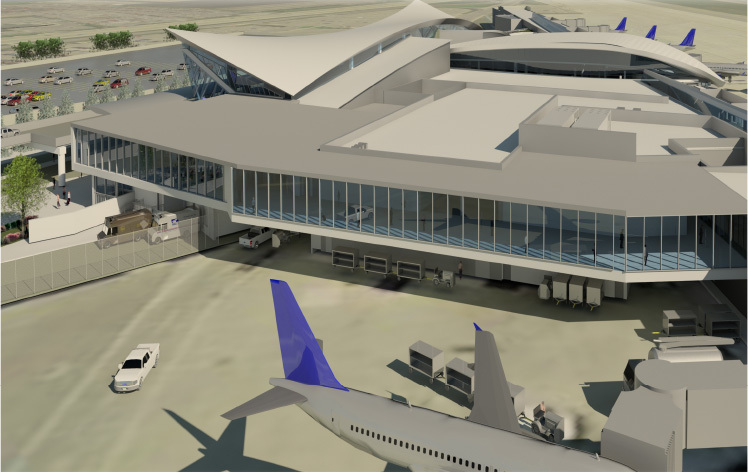 A rendering shows the expansion plans for the Buffalo Niagara International Airport.

And the airport must plan for the not-so-distant day when airlines will graduate from small commuter planes to bigger craft with at least 90 seats.

Bigger planes “mean a bigger rush and more stress on the baggage system,” he said.

Plans now call for four carousels to replace the current three flat plates, with each carousel continuing about 1.5 times more capacity than a flat belt. The flat belts serve their purpose, Vanecek said, but bags slide off and the openings can present a security risk, prompting the Transportation Security Administration’s periodic checks that stop the belt.

“The one thing we kept hearing is ‘improve the baggage claim,’ ” Minkel said. “This addresses that.”

The new project represents the latest phase of a 20-year airport master plan originally pegged at $406 million but now expected to be higher.

Over the last five years, the NFTA has increased parking capacity toward a 10,500 vehicle goal, added new gates and installed new doors, rest rooms and seating.

Future projects include new taxiways, a centrally relocated fire and rescue station, and even a long-discussed overpass from the Kensington Expressway providing direct access to the airport.