Most often, I've marveled at the big, beautiful rink at Canalside. It's right outside The News. Even in the worst weather, you see those skaters out there. They're so picturesque, like out of a Dutch painting.

Much as I've admired them, though, I never thought of joining them. When was the last time I ice-skated, when I was 16? Giving it another whirl never crossed my mind.

"Go ice skating outdoors." There it was, on our list of 100 things every Western New Yorker should do at least once. I had to try it. When I was a kid, I'd always skated indoors. We didn't have the outdoor rinks we have now. I had to do it. I had to check this box. Warmer temps were coming. Tuesday was the day.

Skaters embrace the Ice at Canalside on a clear day for Chillabration. (Don Nieman/Special to The News)

And so at 3 p.m., when public skating opened, I ventured down to the rink at Canalside.

It was sort of a thrill to walk down to the rink, instead of past it the way I always had. It reminded me of a previous 100 Things stop, the Mark Twain Room in the Central Library

. I had walked past that room hundreds of times without stopping in.

But the Mark Twain Room hadn't made me sign a waiver. The ice rink did. I grew nervous reading the first line: "I understand ice skating is a DANGEROUS ACTIVITY." That hadn't occurred to me back in my skating days.

"I haven't skated since I was a kid," I confided to the cashier, and to the kids who rented me skates. No one told me, "You'll be fine." Maybe these people knew something I didn't. 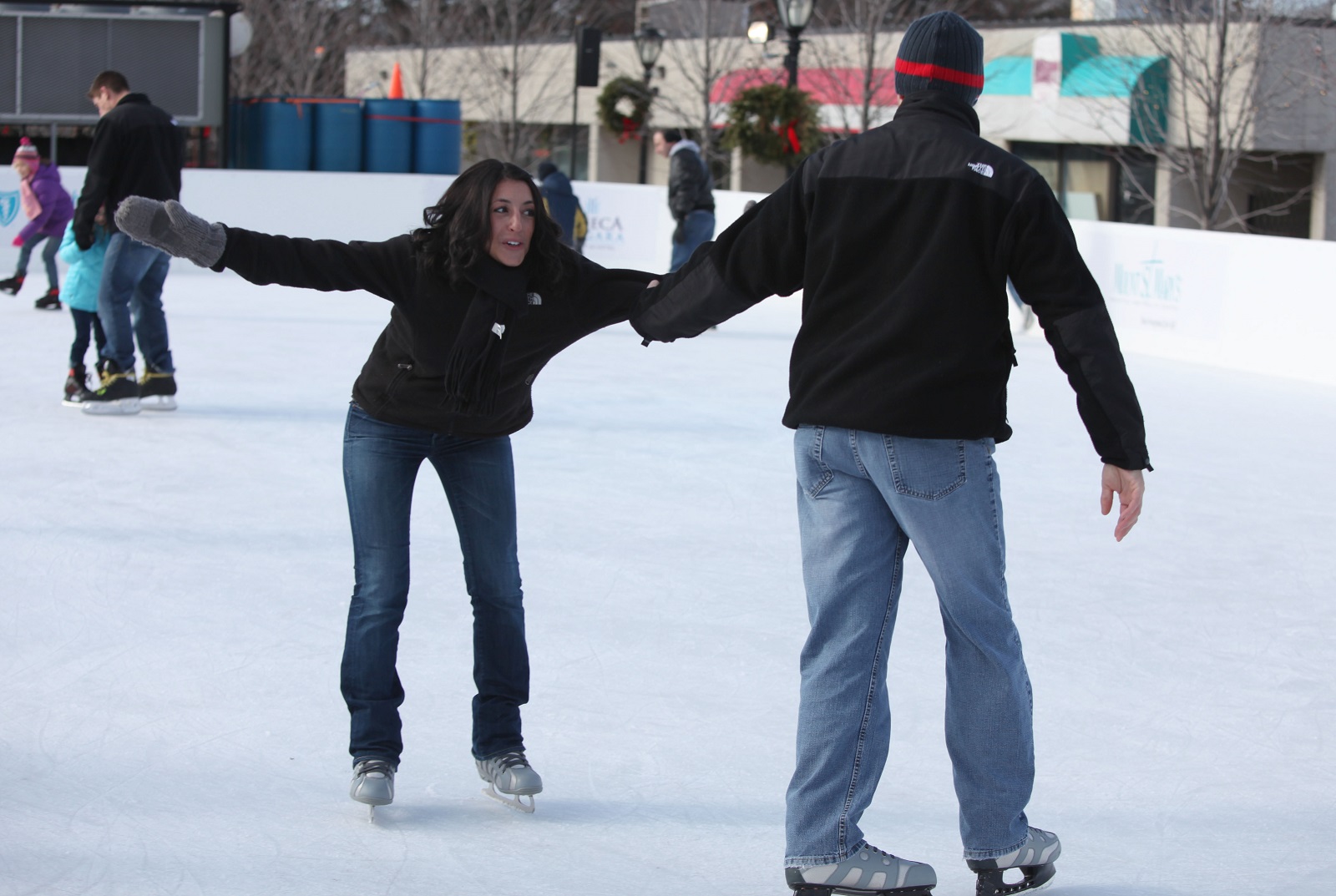 Ice skaters help each other out. (Buffalo News file photo)

Skates have changed since I was a teenager. These were big and rigid, like ski boots. I liked them. Stashing my boots in a cubby, I picked my way down the ramp. But when I got to the ice, I almost keeled over.

Whose idea was this?

Seizing the wall, I stood still and balanced. I breathed. There were posts along the wall and I grabbed first one, then another. I almost fell but saved myself. I grabbed another post.

I kept tipping backwards. It came back to me: As a kid, learning to skate, I was told to lean forward.

One post at a time, I wobbled along the wall. If anyone was leaning against the wall, blocking my way, I simply reversed direction. Back and forth I inched -- awkwardly, gingerly. Luckily it was early, and there weren't a lot of skaters on the rink to witness my clumsiness. 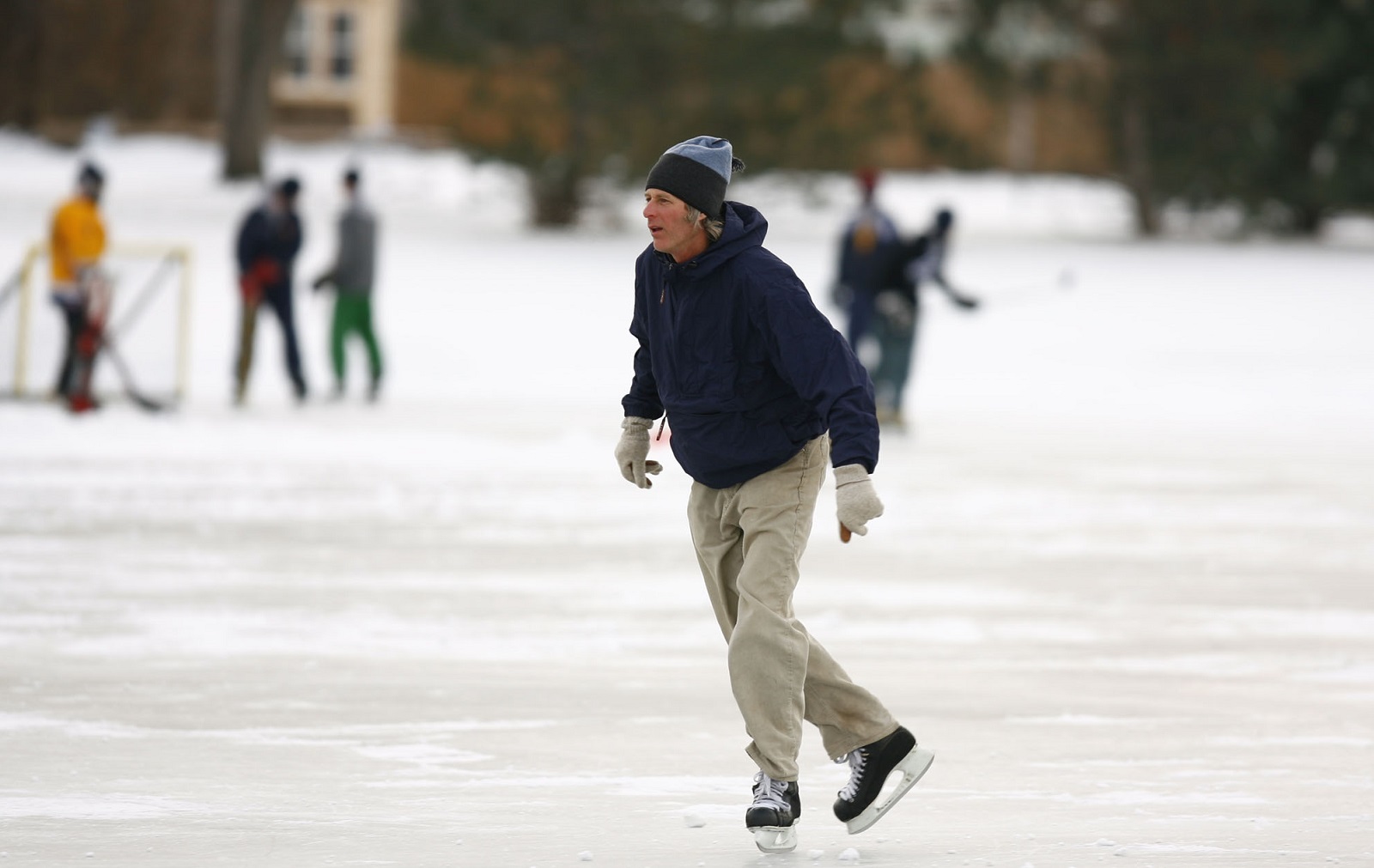 Dave Magavern of Buffalo skates on Ives Pond in the City of Tonawanda in 2008 as other skaters in the background get ready to play hockey. (John Hickey/Buffalo News file photo)

[RELATED: Where to go ice skating in Buffalo area] 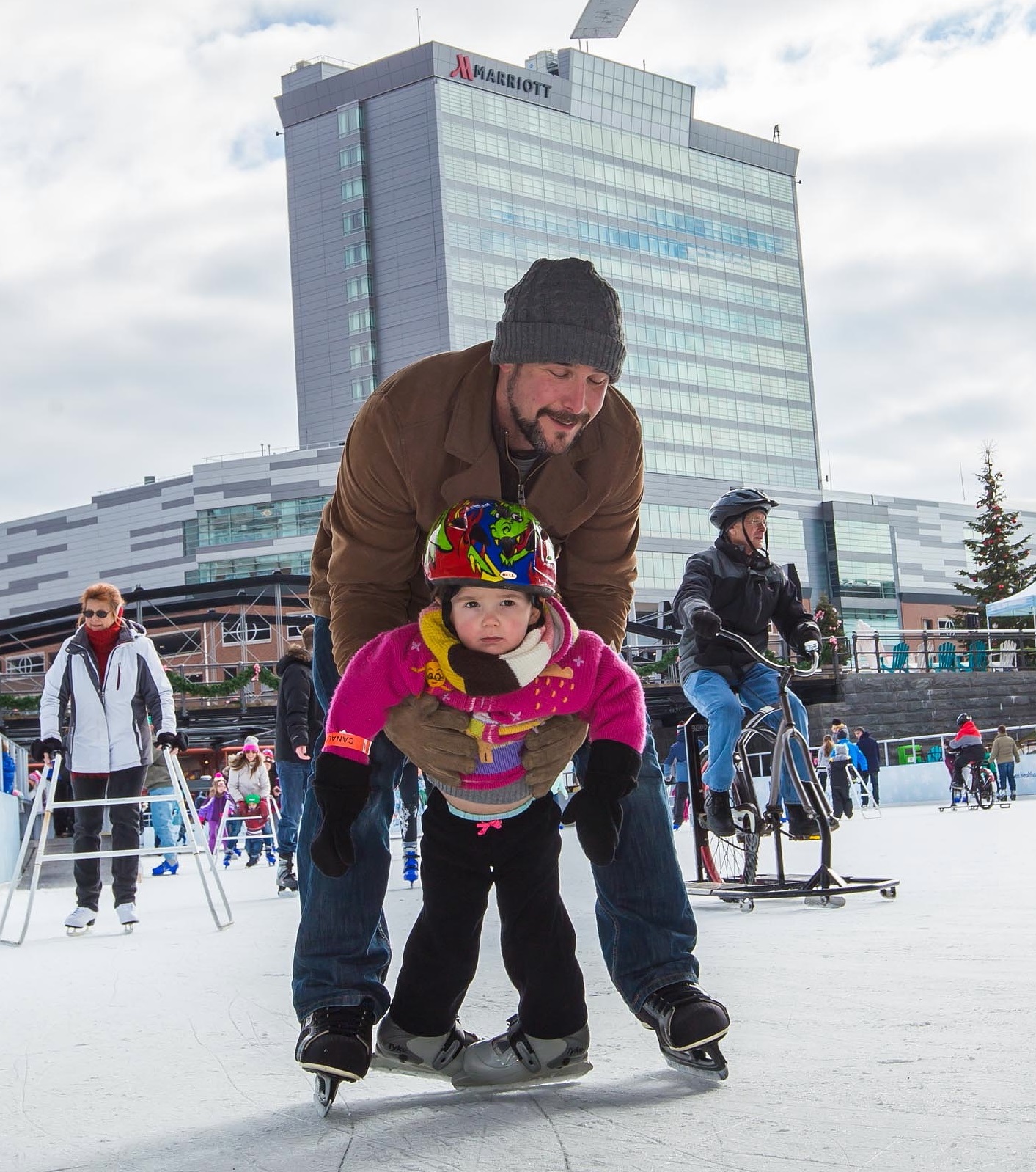 "Live fearless," a Blue Cross ad encouraged me. That made me smile. Good thing I hadn't brought a friend, I thought. Because at this point the friend, seeing how hopeless I looked, would have said, "Let's just go to the Liberty Hound." And I would have gratefully agreed.

As it was, though, I kept with it. And after half an hour, maybe 45 minutes, I was able to skip a post here and there.

Then I let go of the wall for a bit.

Out on the rink. Nothing fancy, mind you. I still had to crash into the wall whenever I had to come to a stop. But suddenly, I was wobbling no more, I was part of the skate-scape. I could not believe it.

[PHOTOS: Smiles at Chillabration at Canalside]

Twilight fell, but incredibly, I didn't. I did have a few close calls -- but I felt comfortable enough to take my eyes off the ice and look around me. The Metro Rail, the Skyway, Shark Girl and the rest of our crazy waterfront -- so this was what it looked like from here.

My evening was complete when I saw an onlooker taking a picture. It was all I could do not to smile and wave. Look, that's me on the ice. Skating!

Now, if winter could only last forever.