The owner of One Seneca Tower has offered a preview of his plans for the building.

Before a crowd of 100 guests at an invitation-only gathering for CBRE-Buffalo's annual MarketView analysis of Western New York's commercial, industrial, retail and multifamily sectors, Douglas Jemal, the founder and president of Douglas Development Corp., laid out his plans for the landmark building.

His ideas for One Seneca include housing called the Lofts at Seneca, plus retail on the lower level, in what could be a $200 million redevelopment of the structure.

"If I can't raise the bar, I'm not interested," Jemal said at the event.

Jemal, a veteran real estate investor, has previously revealed only cursory details of his ambitious plans for the vacant 38-story tower, which is the tallest structure in Buffalo. He filed a site plan application for One Seneca today.

“This guy’s a top flight developer, used to doing quality, and he has the financial wherewithal,” said James Militello, a veteran commercial real estate broker and owner of J.R. Militello Realty. “I’m going to imagine a long-term development. Is there something new and different? I hope so, but it’s hard to guess what it might be.”

Jemal bought the tower and its five-story parking ramp in late September, six weeks after he emerged as a surprise purchaser of the foreclosed properties. He paid $12.6 million, including $8.98 million for the tower at One Seneca St. and $3.63 million for the Washington Street ramp. That's a fraction of the $95 million that the prior owners paid in 2005. 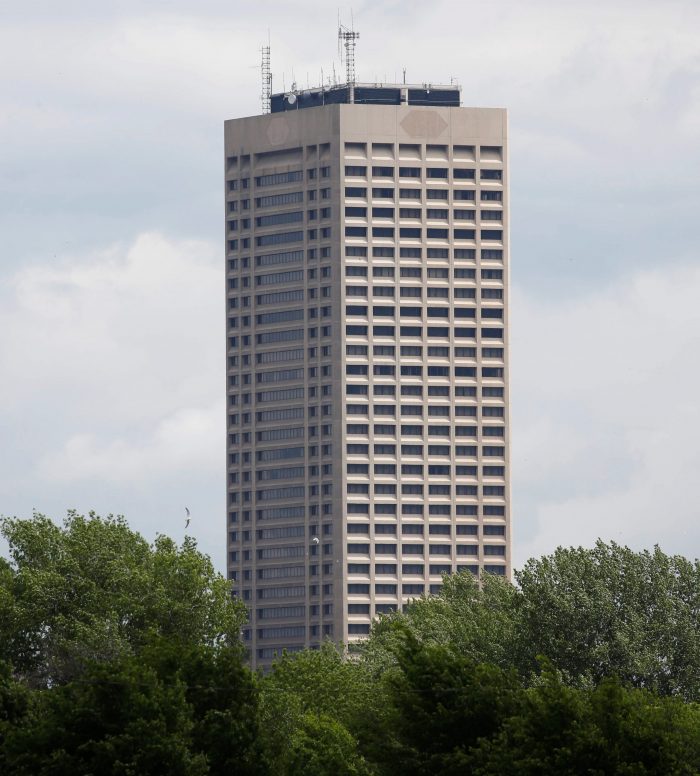 The properties were purchased from a trust owned by bondholders who were owed $91 million on a previous pair of mortgages, on which the building's prior owner, Seneca One Realty of New York City, defaulted. LNR Partners of Miami Beach, Fla., administered the trust and held title to the properties after it completed foreclosures on the tower and ramp in October 2015 and March 2016, respectively.

Formerly One HSBC Center, the tan concrete Brutalist-style monolith was constructed in 1972 for $50 million as the headquarters for Marine Midland Bank, later HSBC Bank USA. The complex includes the tower itself as well as two annex buildings known as the West and South wings, plus a 460-space, two-level parking garage underneath  The separate ramp has 814 spaces.

HSBC dominated the building for 40 years, occupying three fourths of the space, with law firm Phillips Lytle LLP as the second-largest tenant. But both decamped for renovated or new space in late 2013, triggering the initial foreclosure filings and additional departures by other tenants.

Since then, the tower’s fate has been uncertain, creating significant worry throughout real estate, political and business circles in Buffalo. With a total of 1.2 million square feet, and 853,000 square feet of rentable space – all of it currently empty – the tower’s uncertain future cast a large shadow over the downtown real estate sector.

“Think of the impact when it was emptied out,” Militello said. “It was an integral part of the downtown marketplace. There was a huge void with the emptying of that building.”

Experts, including from the Urban Land Institute, have noted the risk of a new buyer seeking to release the entire building quickly by dumping the space on the office market at low rates and warned that such a move would be devastating to other buildings and their owners.

Instead, they recommended a wholesale conversion that would blend several uses together to dilute the impact. And they predicted such an enormous undertaking would easily cost over $200 million – a figure that Jemal never disputed.

From the moment he came forward with his purchase contract, Jemal stated that he expected to pursue a mixed-use redevelopment, with equal parts hotel, residential and commercial office space, as well as a “significant” retail component on the lower levels. A redesign of the exterior had also been discussed as an option, including remaking the courtyard area with smaller building kiosks and other features to break it up.

Jemal, a Brooklyn native, is no stranger to large-scale redevelopment projects and urban revitalization. His Douglas Development Corp. is the No. 2 commercial real estate developer in the Washington, D.C., area, with a record of completing adaptive reuse projects that have transformed parts of the nation’s capital. The company controls over 9 million square feet of leasable space and over 8 million square feet of developable land, with over 180 properties in Washington, Virginia, Maryland and Pennsylvania.

His firm redeveloped the historic 23-story CNB Building in Richmond and is also pursuing the Reading Station in Pennsylvania. This is his first effort in New York.

“The impact will be positive,” Militello said. “You can’t have a vacant eyesore in the middle of a dynamic market. Any attempt to renovate that and bring it back online is going to do nothing but support the other investments.”