Kevin O’Connell was doing weather at Channel 4 near the beginning of his television career 40 years ago and ended up talking, eating and sleeping at the station for four days.

Barry Lillis had to be convinced to head to Channel 2 by his family members, who didn’t see him again for days.

Tom Jolls couldn’t see two feet in front of him doing the Weather Outside at Channel 7 when the station was on Main Street.

[The Blizzard of '77: Buffalo's storm for the ages]

In interviews this week, the three main weathermen at the local stations during the Blizzard of ’77 reminisced about their experiences when Western New York was shut down by the historic storm decades before Doppler radar, weather satellites and other improved technology substantially reduced weather surprises.

They recalled some things as clearly as if the blizzard had happened yesterday. Of course, they remember the tragedy of people being discovered dead in cars that were buried for days. They also remember lighter moments: The emptying of station vending machines. Going on the air without makeup. And getting around town in unusual ways.

O’Connell, who now works at Channel 2 and is the only weathercaster of the three still on the air, recalled the forecast was for “some snow and windy conditions.”

“Never did we think that it was going to be the extent that it turned out to be,” he said. “After we got the initial hit of the storm, I was basically stranded there for four days. There was no way I was going to get my car out of the parking lot, even if I could find it.” 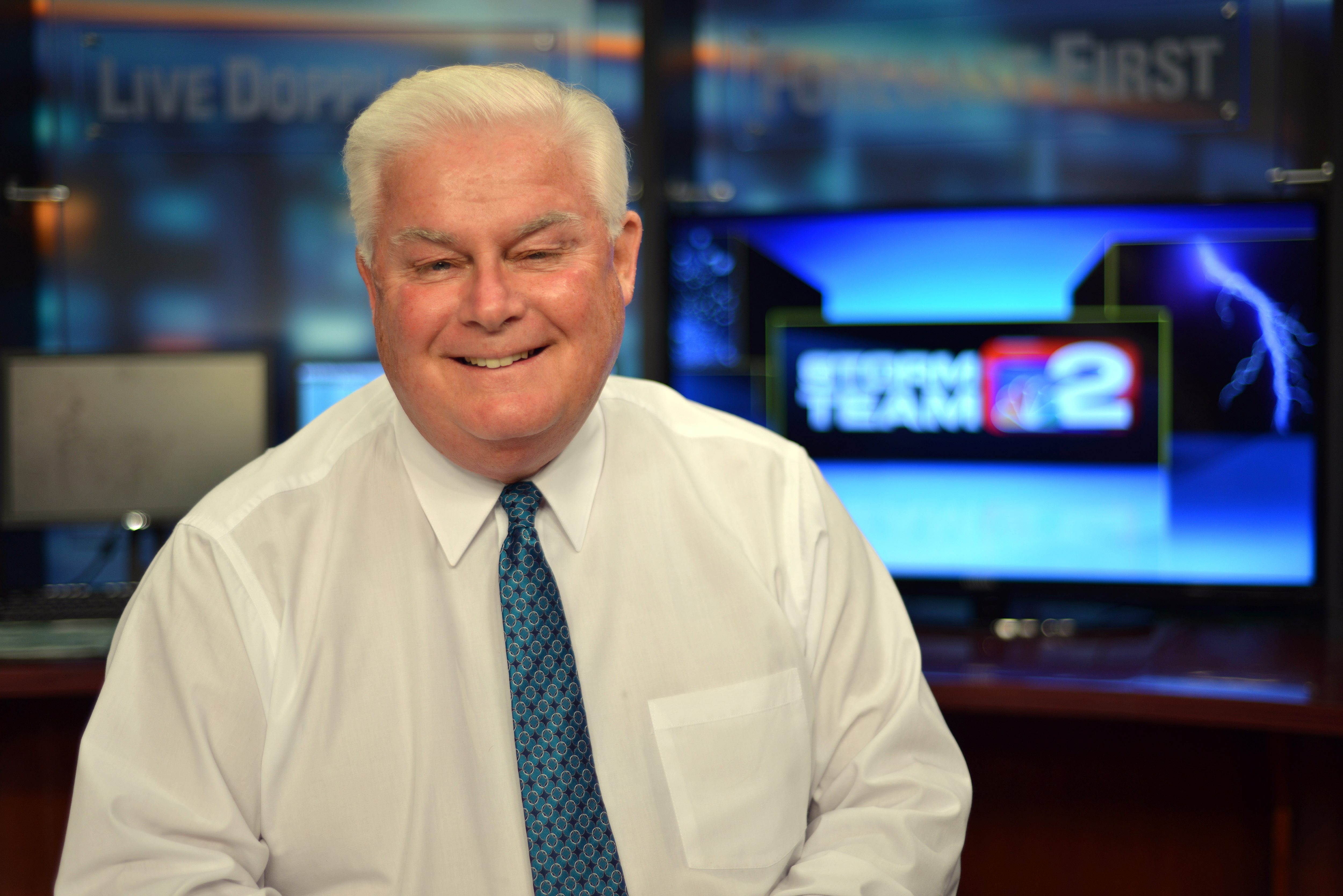 Kevin O'Connell was "basically stranded" at the Channel 4 studios for four days during the Blizzard of '77.

And it was hard to see anything near the station’s Elmwood Avenue studios.

“On one side of Elmwood Avenue we had a couple of inches of snow and on the other side we had several feet of snow,” O’Connell said. “It was pretty much where the winds were blowing. We only received statistically speaking about a foot of snow for the entire event. But those winds were howling 40 to 60 miles per hour and it kept moving everything around. It was like a giant snow globe. The snow had the consistency of a dry laundry detergent and it just kept blowing everywhere and we couldn’t see anything.”

He finally made it home, only to turn around to go back to the station.

“The only words I heard out of my son’s mouth was ‘Oh, Dad, fresh food,’ ” recalled O’Connell. “That’s the one thing that sticks in my mind to this day.”

He said viewers were “very thankful” to be given any direction of what was going on.

“This was the kind of event that you don’t want to be alone,” he said. “Even though you have family, you want somebody to give you the best information they can…. The general feeling I got from the public was they were glad we were there and very complimentary of what we were doing.”

An older couple whose car was in a ditch was especially happy to see the Channel 4 crew when O’Connell was being driven home.

“We got them out and the gentleman reached in to give us a $5 bill for helping, and we said no,” said O’Connell, “And then he said, ‘you guys in television must make a lot of money.’ I thought that was kind of a cute way of him saying thank you.”

“It was becoming increasingly difficult between 6 o’clock and 11 o’clock to even see the side of the building where the camera was from inside,” recalled Jolls. “And I’m thinking to myself, ‘This is getting to be way beyond what originally had been thought.’ Probably the biggest part of the problem was the wind whipping up the snow off the frozen lake.” 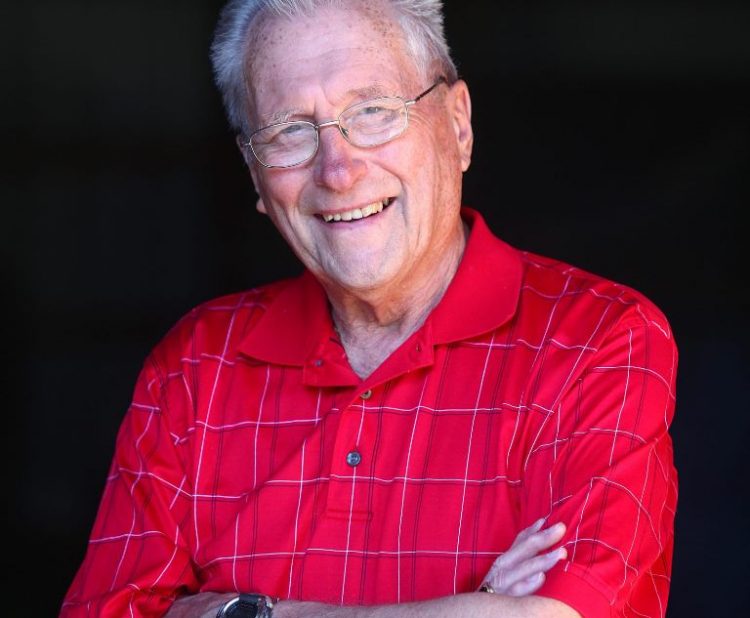 “I remember an ambulance going up Main Street,” added Jolls, “and saying to the audience, ‘Pity the person who needs an ambulance on a night like tonight. But thank goodness we have the brave ambulance drivers out there doing their job. ’ ”

He was marooned at home the rest of the weekend, unavailable to be part of the continuing coverage.

“I was happy to be home to make sure my family was all right,” said Jolls. “First of all, it was so cold. It was so windy that it was difficult to keep warm in the house because of the way the wind was blowing and our house was situated. So we huddled in the family room with the fireplace going and that’s where we stayed all weekend. We had neighbors who could not get their house warm at all and they spent a good portion of the time with us, huddled and watching ‘Roots.’ That was the big attraction on TV that weekend.”

Lillis, who has been a chaplain at Erie County Medical Center for 23 years and teaches chemical dependency and spirituality classes, was at home in Niagara Falls when the blizzard started.

“My family looked me and said ‘you shouldn’t be here, look on television, all these people are working. You should be working,’” recalled Lillis. “They said, ‘find out how to get wheels and get up there.’ ” 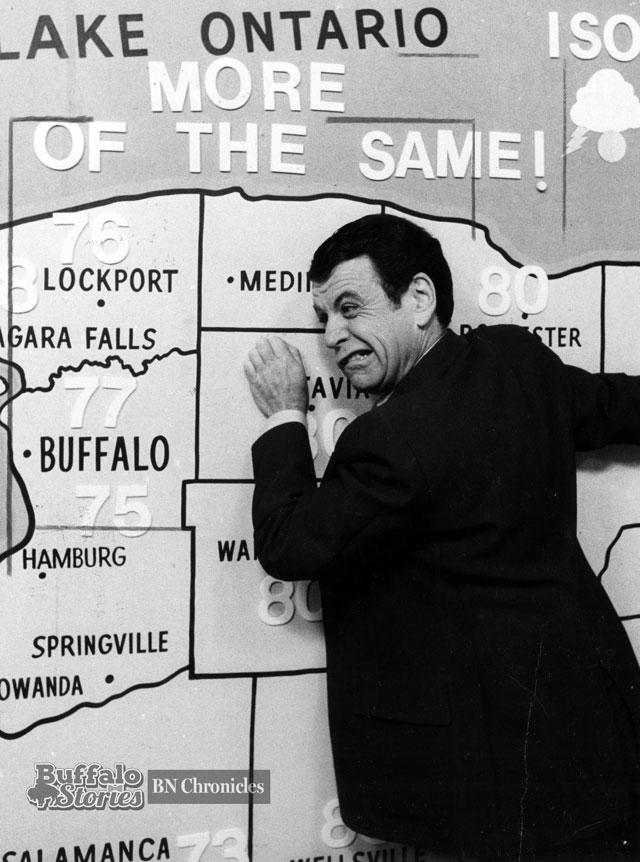 Barry Lillis early in his career at Channel 2. He hitched a ride with an 18-wheeler to get from his home in Niagara Falls to Channel 2 during the Blizzard of '77.  (News file photo)

Lillis said he hitched a ride with someone he knew that had an 18-wheeler.

“We got to Channel 2 and at that point he slid into a car and smashed it, I jumped out of his truck, went into the TV station and showed up,” recalled Lillis. “Stewart Dan was standing at the weather board and I walked in and said, ‘I’ll take over, Stu.’ There I was with a knit cap and a heavy coat and I did the weather looking like I was from the Arctic.”

[PHOTO GALLERY: A Look Back at the Blizzard of '77]

He briefly escaped the station days later when someone suggested having lunch, a proposition that Lillis thought unlikely because of the weather conditions.

“He came down with a dog sled,” said Lillis. “We went flying down over Delaware Avenue flying over cars on a dog sled. And we found a restaurant open.”

Lillis, who is now 80, was in his first year at Channel 2 after working in Fargo, N.D. He didn’t initially think the forecast of 8 to 10 inches of snow was a big deal.

“Well, it was a big deal,” said Lillis. “It was a system that continued to churn air into Lake Erie, pushing the snow inland and it wouldn’t stop because a high pressure system was holding it back so nothing was moving. It was like a wheel that wouldn’t go away, it continued to spin and that went on for three days.”

Lillis recalled that people had cabin fever and were mad.

“They would call me and say, ‘when in heck is this thing going to end?’ And they want to be mad at somebody. And one guy called me up and said, ‘We never had weather like this before you came.’ ”