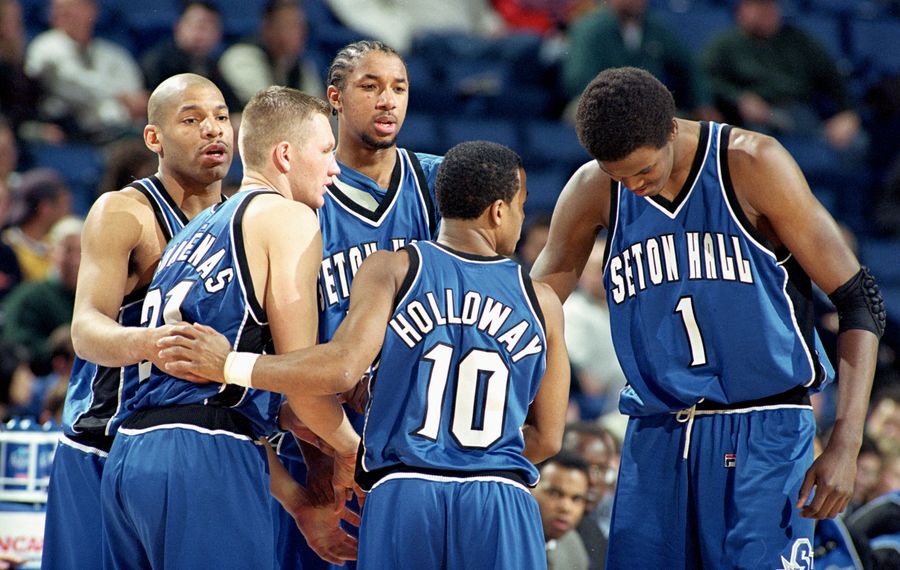 Shaheen Holloway isn't Irish, and the team he was playing against was the one wearing green.

But the Seton Hall guard was full of blarney Friday at HSBC Arena after driving the length of the floor to score the winning layup and beat Oregon in overtime, 72-71, in the first round of the NCAA basketball tournament.

Maybe it had something to do with the fact his number is retired at St. Patrick's High in New Jersey.

His team down by one with 8.7 seconds left to play, Holloway took the inbounds pass, dribbled past several Duck defenders and, with his right hand, flipped the ball high off the glass and through the net.
A desperation half-court heave by Oregon's Darius Wright was an air ball, ending one of the most exciting games of the tourney thus far.

"Growing up as a little kid," Holloway said, "you watch the NCAA tournament and see people doing stuff like this and you say to yourself 'One day I want to be a part of that.' "

The 5-foot-10 senior finished with a game-high 27 points, and there was no doubt who Seton Hall coach Tommy Amaker wanted to take the last shot.

"We want to get it into his hands no matter what," Amaker said. "We're going to live and die with his shot.

"We had something designed to push the ball up the floor and create something, but he always has the opportunity to use his instincts to make a play, and he did. He has the ability to create plays, to be instinctive on the fly."

Seton Hall, seeded 10th in the East, raised its record to 21-9 and will play second-seeded Temple Sunday at 12:10 p.m. Oregon, seeded seventh, finished its season at 22-8.

The Pirates led by 10 with seven minutes left in regulation and appeared to be in control. It was their biggest lead of the game.

The Ducks, meanwhile, were out of their fast-paced offensive style and struggling to score, shooting 2-of-16 from the floor through the first 10 minutes of the half.

"We were getting into too many situations where we were having to walk the ball down the court because of timeouts, loose balls going out of bounds and them scoring," Oregon coach Ernie Kent said. "As soon as we started defending them, allowing them to miss shots, it opened up our running game and, sure enough, we came back on them."

Oregon went on a 9-0 run to make the score 59-56 with 3:57 to play, and even after Holloway broke the run with a driving layup, the Ducks continued to have offensive success.

Reserve Bryan Bracey tied the score at 62 with 1:07 remaining. He put the Ducks ahead, 64-62, on a pair of free throws with 12.7 seconds left. Bracey, who didn't score in the first half, scored the Ducks' last six points of the second.

But the Pirates stayed alive when Rimas Kaukenas hit a layup with 3.3 seconds on the clock, tying the score at 64. Kaukenas left the game four minutes into the second half with an injured left ankle.

"It was kind of hurting," Kaukenas said. "But I was fine because during that time when you're down by a couple of points, you definitely don't think about the ankle."

Bracey was called for goaltending on a Kaukenas shot, opening overtime. Wright answered with a three-pointer. Holloway then picked off Wright's bad pass and went the distance for a layup. But Holloway returned the favor by turning the ball over to Wright, who passed to Bracey for a reverse dunk to put the Ducks ahead, 69-68, with 1:21 left.

Seton Hall's Darius Lane stole a pass and went the distance himself to regain the lead with 36.3 seconds left, but a pair of free throws from Frederick Jones with 8.7 seconds to go put Oregon on top, 71-70, setting the stage for Holloway's heroic drive.

Oregon was led by A.D. Smith, who scored 15 of his 17 points in the first half. Alex Scales, who had to leave the game twice because of a bloody nose, added 16 points. Bracey had 10 points and six rebounds off the bench.