Lots of work going on lately in the basement level of City Hall, specifically in the rooms that get the most use from the public.

Mayor Brown promised a few months back there would be a major overhaul. And it's happening now. Work crews have been on the scene for the past week.

Here's a reminder of what the women's room looked like - with broken mirrors, stall doors that don't all close, and mismatched equipment of all sorts. I'm told the men's room wasn't any better. 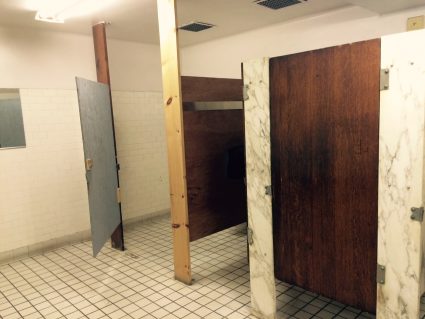 I got a call Wednesday from Lovejoy Councilman Rich Fontana, who is home recuperating after a few weeks in the hospital, and one more in rehab.

Some of Fontana's colleagues had told me he was suffering from pneumonia complications, but Fontana said he actually had several blood clots on his lungs, which were creating breathing problems that continued even after the clots were removed.

He's feeling much better now, and has been doing some email work from home, he said. He hopes to be back in City Hall in two weeks.

Fontana also said he wants to publicly thank all the nurses, doctors and other medical professionals who helped care for him at Sisters Hospital.