J.P. Bak knew it wouldn't be easy to make tablet computers in Buffalo.

After all, most tablets and PCs were made overseas. But Bak's idea wasn't to build a conventional technology business.

The Bak USA Chairman wanted to build a technology business with a social conscience.

He wanted to build a business that would make high-quality tablets that would be affordable to consumers who couldn't buy more expensive models. And he wanted to make them in the United States, in a city where he could employ workers from vulnerable populations, including refugees and immigrants who lacked formal education.

Bak, speaking at The Buffalo News' Prospectus Premiere event Thursday evening in Cheektowaga, knew his idea wouldn't pass muster in American business schools. But he thought it would work. After all, he had done something similar in Haiti.

"We have a vulnerable business model. We understand that," Bak said.

Bak, along with his wife, Ulla, started their previous low-cost tablet company, SurTab, because they wanted to stimulate economic development in Haiti after the country was devastated by an earthquake in 2010. Bak opened a production plant where locals assembled tens of thousands of tablets that were sold in impoverished African countries.

Once SurTab had grown to the point where it was successful, the Baks sold it to their Haitian partners and started to focus on doing something similar in the United States.

The Baks initially considered Detroit, but they eventually settled on Buffalo as the home for what became Bak USA, launched with the same mission that SurTab had – to create jobs in an economically depressed area, hire and train refugee and marginalized workers, and sell affordable technology to those who need it.

"When you have a vulnerable business like us ... when you try to put people and the product on top of profit, you need friends," Bak said. "You need people who appreciate it and say, 'Go! Go for it!' "

Bak said the company has found just that in Buffalo, where it has built a highly diverse workforce of 75 people, from 14 countries who speak 22 languages.

"In Buffalo, we decided we wanted to employ two groups of people: Highly educated people, and those who had no formal schooling," Bak said.

The Bak model shuns the assembly line concept. Each worker makes a tablet PC from start to finish – a process that gives the worker a sense of ownership and pride in the work, and also leads to better quality, Bak said.

Each member of the company's workforce, which includes many immigrants, can produce two customized computers per hour. 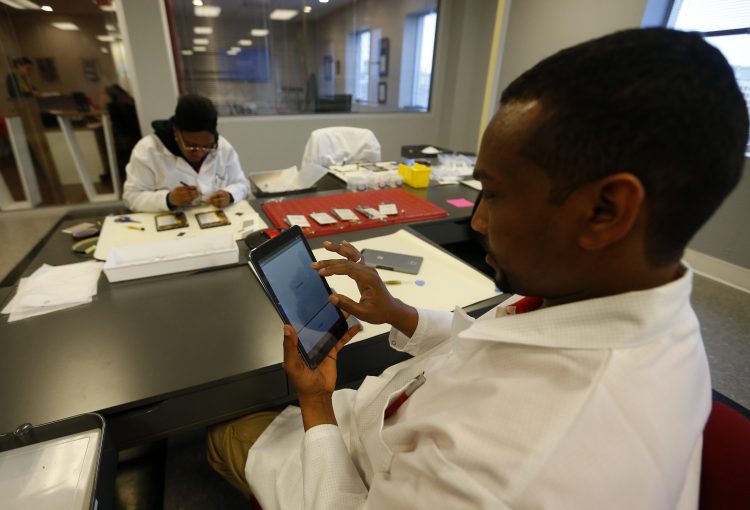 When the Buffalo operation opened two years ago on Michigan Avenue, the Baks at first figured that their biggest market would be the same poor African countries that SurTab had targeted. They soon realized there was an even bigger need for affordable technology in the United States among businesses and school systems. The Buffalo school system, for example, bought $75,000 worth of discounted tablets for its students in 2015. That shift led to Bak USA forming a partnership with Microsoft Corp. last year to become an “original equipment manufacturer” of computers that run on the Windows 10 operating system.

Bak produces the tablets. Microsoft distributes them. The company delivered its first big order of tablets under the Microsoft deal just before Christmas to a school in California, Bak said.

Bak USA is in the process of more than doubling its space at its downtown Buffalo headquarters, leasing the fourth and fifth floors of the Compass East mixed-use building at 425 Michigan Ave., along with part of the building's lower level to accommodate equipment used to make the company's tablet computers that is too heavy to be located on higher floors. In all, the $1 million expansion will give Bak nearly 30,000 square feet of space.

Bak USA, which has invested $22 million in its Buffalo facility, initially promised to hire 267 workers by the end of 2019.

"Our little business will grow here in Buffalo, keep our headquarters here," Bak said. "We will embrace this society."