If you thought the 30 mph speed limit slowed down traffic on the Scajaquada, wait until you learn the state's revised plan for the parkway, including seven traffic signals.

The concepts were included in a required Draft Environmental Impact Statement released in November – but this was the first time they were unveiled and discussed at a public forum.

Other parts of the DOT plan include replacing light poles with ornamental lighting consistent with other parkways designed by landscape architect Frederick Law Olmsted; installing plantings throughout the corridor to complement the park; constructing new 10-feet-wide shared-use paths and five-feet wide footpaths to enhance pedestrian and bicycle mobility along the 198; and constructing a roundabout at the 198 and the Grant Street connector. 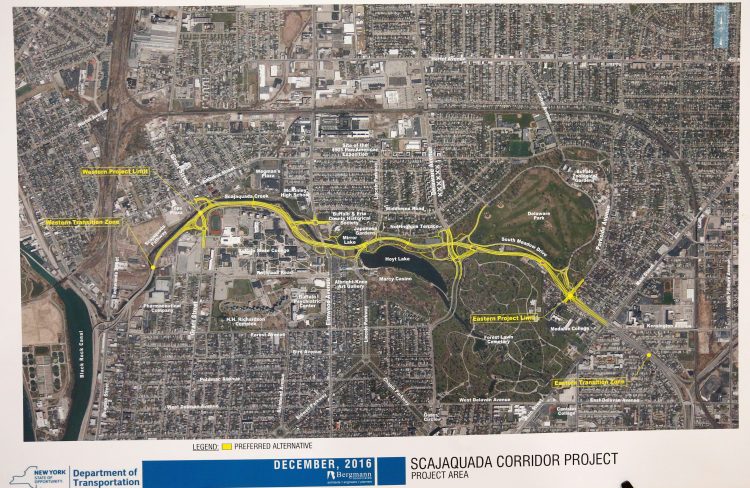 Hundreds of people turned out for the public hearing on converting the Scajaquada Expressway into a lower-speed boulevard.

Their message: The $101 million plan developed by the state Department of Transportation needs to go further to protect pedestrians, do more to lessen the road's impact on Delaware Park and provide better bicycle access.

"If you look closely at the intersections, we're looking at anywhere from seven to nine lanes in some locations that we have to cross as a pedestrian," said Justin Booth, executive director of GoBike Buffalo, speaking in front of the nearly full auditorium in Olmsted 64.

"That's almost like dropping the intersection of Maple Road and Niagara Falls Boulevard" near the park, he said.

Stephanie Crockatt, Buffalo Olmsted Parks Conservancy's executive director, said a park-appropriate road has yet to be put forth.

Some suggested burying the roadway under the park, which would solve a potential traffic problem because of the slower speeds while restoring green space.

Others said the lanes were still too wide and the intersections too big. Another recommended hiring an urban planner to work with the traffic engineers.

Assemblyman Sean Ryan, D-Buffalo, said there had been some improvements, but they still fell short.

"There's no bike lanes, the median is way too big, which restricts other design options, and the intersections are really, really large," Ryan said. "I try to imagine a pedestrian pushing a stroller  across those intersections, and I'm not quite sure the scale is there."

Ryan said he hoped there would be another public meeting based on the hearing's comments.

But Larry Williams, who lives near the park, said it was time for compromise after nearly two decades of disagreement.

Booth said there were good changes made by the DOT from previous public comments in May, but pressed the state agency to make more.

"We're here tonight to really let you guys know that, good job so far," Booth said. "But we're looking, as a community, to make your plans move a little further, and get past designing for traffic and start designing for people."

Matthew Driscoll, the DOT commissioner, told The Buffalo News that since beginning in June 2015, he has overseen more public meetings and more progress than at any time during a process that has sprung to life intermittently since the early 2000s.

Driscoll said he was committed to getting the project completed. The next step in the process is to develop a Final Environmental Impact Statement later in the year, after the comments from Thursday's hearing are responded to.

But Driscoll said it was possible that there could be another public meeting to discuss whatever changes are to occur.

Comments can be sent to the DOT by mail or email through Feb. 8 by contacting: Craig Mozrall, NYS Department of Transportation, 100 Seneca St., Buffalo, NY 14203.

For some who spoke at the hearing, the matter was serious – and personal.

Jim Gribbins, whose son was hit by a car on Amherst Street, called the DOT's plan "a farce."

"I live on Amherst Street, and my son was hit by a car driving speedily fast at night," Gribbins said.

"This is not helping us," he said. "It's not the Olmsted design, or what we need."