The Erie County Sheriff’s Office and Buffalo Police Department snipped, clipped and shaved their way to cancer cures during the holidays, raising a collective $39,400 to support cancer research and patient-care programs at Roswell Park Cancer Institute through the Goin’ Bald for Bucks program.

More than 250 Buffalo officers and 280 sheriff’s deputies have grew beards between Nov. 1 and the end of 2016. In order to be excluded from a policy that prohibits beards and long sideburns, each participant paid $25 toward their fundraising efforts. Donations also were made to both groups by individuals, businesses and other members of their departments.

It was the first time the Sheriff’s Office participated. 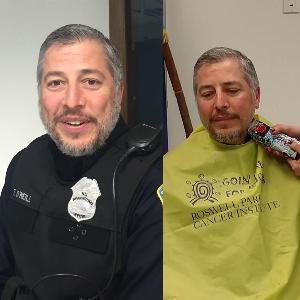 Buffalo Police Officer Timothy O’Neill was among those to participate in the Beards for Bucks event.

Erie County Sheriff Tim Howard said he learned of the BPD’s participation in December 2015 and wanted to get involved this year. In addition to shaving his beard, Howard also shaved his head and mustache as a surprise for his wife, Sue, who is battling cancer and lost her hair during chemotherapy. She was present at the Erie County Sheriff’s office to witness the shave.

“We do what we do every day to keep our community safe, but we want to do more. It’s important to give back to organizations like Roswell Park who do such important work for those battling cancer here in Buffalo,” Howard said. “It takes a lot of courage and strength for cancer survivors to fight through their treatments. I want them to know that we’re willing to do what we can to help.”

Goin’ Bald for Bucks began in 2002, when Western New Yorker Cathleen George was being treated for cancer. Her brother, Tony, vowed to keep his head shaved until his sister’s hair grew back. Tony, a teacher at Lake Shore High School, shared his plan with his students. One student suggested they raise money while shaving Tony’s head, and Bald for Bucks was born. To date, Bald for Bucks participants have raised more than $4.5 million.