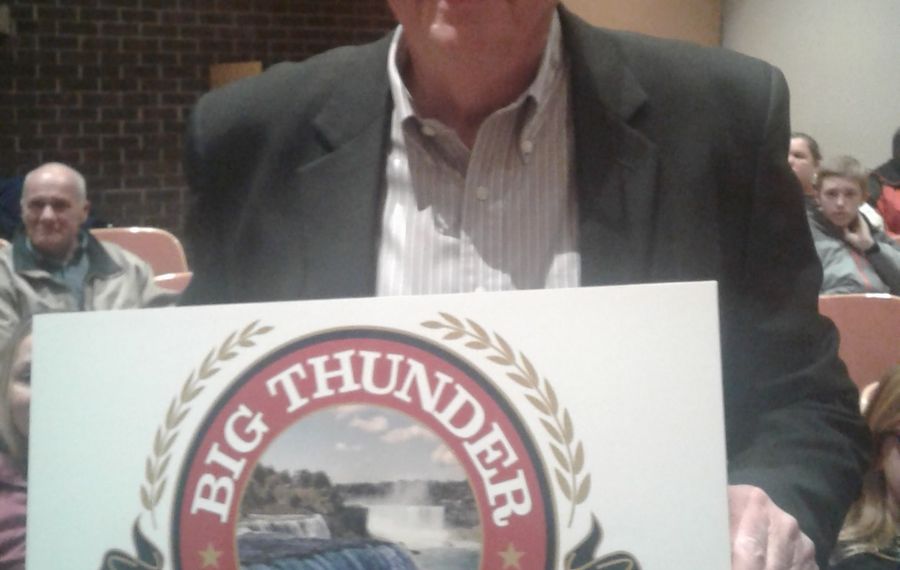 WHEATFIELD - A planned microbrewery and restaurant at The Summit, a largely vacant Wheatfield mall, would need as much as $750,000 in state aid to become a reality.

Fifty to 60 jobs would be created if Big Thunder Brewing Co. opens as proposed, officials said Monday. The facility could be used as a classroom for a new brewing program at Niagara County Community College.

At a public hearing in Town Hall, John Robinson, a principal in Big Thunder, said the brew pub project might cost as much as $3.3 million.

R. Charles Bell, an economic development consultant for the town's local development corporation, said state regulations cap the grant application at $750,000, but the exact amount to be sought is not yet determined. The Town Board's vote on the application is expected next month.

"I think the Town Board is very interested," Supervisor Robert B. Cliffe said. But he said the board can't go forward until it receives a formal proposal from Big Thunder, which Robinson said is not yet a legal entity. Big Thunder plans to file paperwork soon to establish itself as a limited liability company.

The brew pub and brewery would cover 15,500 square feet in the mall near a two-story space that once was a Hens & Kelly department store at the Williams Road complex.

Cliffe said 10 to 15 jobs would be created at the brewery itself. Bell said the total of 50 to 60 jobs would include workers at the restaurant.

Bell said that under the rules of the Community Development Block Grant program, at least half of those jobs must be made available to low- to moderate-income people.

Cliffe said that "99 percent of people in Wheatfield want to see the mall active. The brewery would be a big help."

Robinson, a business partner of mall owner Zoran Cocov, said the plan calls for a 20-barrel commercial brewery. The count of barrels signifies how many barrels of beer can be produced at one time.

The plan might also include a 5-barrel "teaching brewery" that could be used by students from NCCC.

"They just started a brewing program last fall," Robinson said. "Though they're not committed to it 100 percent right now, we want to keep the door open for them in the future."

He said the $1.8 million worth of brewing equipment could include $195,000 worth of equipment for the teaching brewery.

"Ninety percent of the brewery is going to be wholesale, with one or two (beer) distributors in Western New York," Robinson said.

He said the success of Big Thunder, which is to be formally registered as a limited liability company sometime in the next 30 days, is tied to the plan for two sports domes with inflatable roofs to be erected this year, connected to the mall and to each other. The two 96,000-square-foot domes, managed by Neal Turvey, are to house a variety of athletic fields and courts.

Robinson, who lives in Huntsville, Ont., said based on contracts with local sports leagues, 600,000 to 700,000 visits to the mall are expected between Oct. 1, the target date for opening the domes, and May 2018.

The company is already designing a layout for outdoor soccer fields and ball diamonds on some of the 549 acres of open land behind the mall, which Cocov, a Brampton, Ontario, real estate developer, bought along with the shopping center.

"With this kind of traffic going through the mall, we anticipate the brewery will do very, very well," Robinson said.

Cocov, who did not speak at the hearing, said he has other ideas for the mall that he doesn't want to disclose yet.

He bought the property in 2014 under the name of Summit Outlets and obtained a tax break from the Niagara County Industrial Development Agency to assist his mall resuscitation plan.