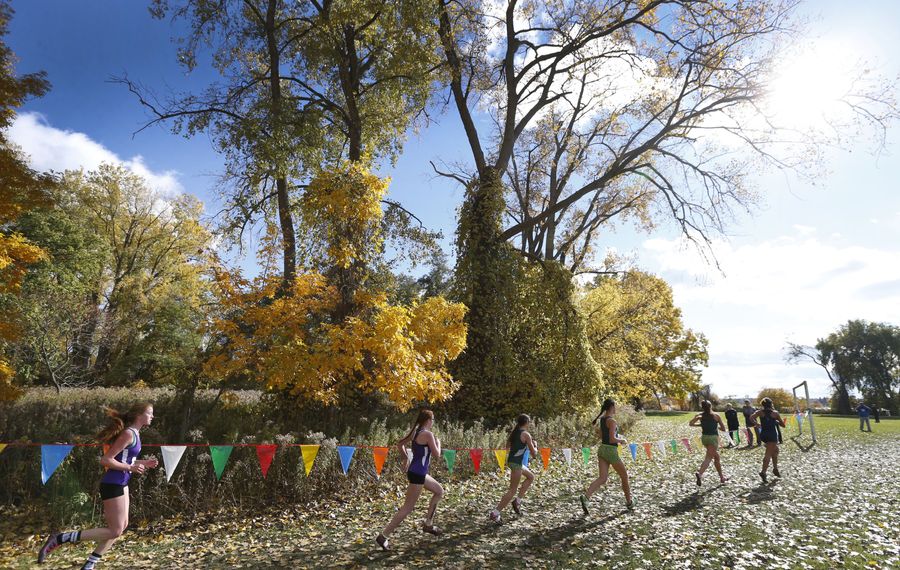 Steve Matteson was a little disappointed to see the calendar flip to 2017. After all, 2016 was quite a year for him and for the Maple Grove cross-country teams.

Matteson's Red Dragons won their first-ever boys state title when they finished first at Chenango Valley State Park. The girls weren't far behind, finishing second in the state. Those achievements came in Matteson's first year on the job.

"I have been pretty excited," Matteson said in looking back on the time since that performance by his teams. "I've had some high emotions. Both the boys and girls teams were very successful."

The former coach, Robert "Doc" Rappole, was something of a local legend for his great work with the Maple Grove cross country and track teams over the years. Matteson was assisting him when he got the word last year that Rappole had decided to give his head coaching jobs. Matteson was picked as the new cross country coach.

"Those are really big shoes to fill," he said. "I was just lucky enough that Coach Doc could give me all the time in the world, and answered my questions. And it's not like I started from scratch. I used a lot of the same formulas that he used. Luckily I was his assistant and learned what he did."

Maple Grove won both the boys and girls Section VI championships, so it was on to the public school state finals. Cross country does not have moment by moment updates in terms of scoring. Observers can guess who might be in front at a given moment, but it doesn't become official until the race is over and the numbers are calculated.

Matteson felt quite good at the one-mile mark, but was a little nervous at two miles.

"If you had done a photo with a quarter-mile to go, we probably would have lost," he said. "When MileSplit announced we had won, we had no clue."

The toughest part about the victory for the coaches was making sure that the girls' accomplishment of finishing second in the state wasn't overlooked.

"The girls raced first, and they did well - it was still a great accomplishment," Matteson said. "But even when they were on the awards stand, we had to worry about getting the boys warmed up for their race.

"They didn't get the congratulations they deserved. But in talking to the girls, they understood that both teams were there. We celebrated as a full team afterwards."

For his efforts, Matteson was picked as the top boys cross-country coach in Western New York. He was happy to be honored with one of his runners, Michael Peppy, who was an all-Western New York selection.

Peppy finished third in the state meet, leading the Red Dragons to the championship. He was good at the start of the season, and he kept getting better.

"Michael is one of those athletes that I didn't know how to approach," Matteson said. "Starting from the get-go, his first race was faster than I thought he was going to be. I had to change my coaching tactics.

"He worked as hard as he could. Starting at States, he left everything out there. His best race was the Federation meet, where he finished in the top 25. That's a really great accomplishment."

Matteson did not coach the Boys' Runner of the Year in Western New York. That distinction went to Chris Nowak of Sweet Home. Nowak peaked at just the right time, finishing fourth in the state meet in Class B.

East Aurora had two runners on the all-star team. Patrick Murray and Ian Russ finished 1-2 in the Section VI Class B championships, and helped their team go to the state championships. Grey Conover of Clarence is another sectional champion, taking the Class A crown as a sophomore. Ryan Buzby of Grand Island finished right behind Russ in a crowded field at the sectionals. Connor Doran was very solid for Lockport throughout the season, placing third in the sectionals. Ray Sambrotto of West Seneca East was also part of the Class B sectional race.

On the girls side, Carrissa DiTullio of Lockport captured honors as the best girls cross country runner in Western New York. In her first year of participation in the sport, she won the Class A title at the sectionals - helping her team win a crown as well - and had a good showing (29th) at the state meet.

East Aurora, another Section VI champion team, had three of the seven remaining spots on the all-Western New York team. Tori Klimowicz, Molly McLaughlin and Maisy Webster were part of a Blue Devils squad that dominated the competition throughout the season. East Aurora had six of the top 12 runners in its class at sectionals. Danielle and Gabrielle Orie of Nardin were clearly the best in the Catholic school competition. They often ran together to finish 1-2 in no particular order. Abby Gostomski of Cattaraugus/Little Valley won the Class D title by more than 10 seconds over three Maple Grove finishers.

The coach of the year was Mike Heitzenrater of Newfane. The Panthers won the Class C state championship.