The fired-up governor chalked up that middling chance to a recalcitrant Legislature with little political stake in the concept.

The governor wasted no words in blaming a downstate-dominated Legislature for failing to quickly embrace the $500 million program he hopes will continue the “unprecedented progress” of economic development in Buffalo – what he labels the most significant in half a century. But he blasted a Legislature and its New York City majority that, according to him, sees no political gain in continuing the effort.

[Related: Robinson: Buffalo’s shot at revival is now. But will the state build on the Buffalo Billion?]

“It’s not as good as giving out the check itself,” he said of what he called legislators’ penchant for awarding state dollars to various organizations and programs at election time. “It’s member items; the way it used to be.

“It’s not that they attend the event,” he added. “They are the event.”

Cuomo even laid down one of the sternest warnings of his more than six years as governor.

“I will stop the money before allowing it to be distributed as member items, because in my opinion, it’s a waste of money,” he said. “If they don’t want the Buffalo Billion, I will spend half of my remaining life in Buffalo talking to constituents and explaining how they did not fight for their constituents and their residents,” he added. “That I can promise you.”

But he reserved much of his ire for Schimminger, a 40-year veteran of the Assembly and longtime head of the Assembly Economic Development Committee. Cuomo said Schimminger and others like him remain mired in an old approach of doling out pork projects that never produced the pace of economic development now noted by his regional economic development councils in distressed cities like Buffalo.

“Nobody wants to do the REDCs or the $500 million for Buffalo. Nobody,” he said. “Robin Schimminger says ‘I have no role in giving out the money and I used to be chairman of the Economic Development Committee – I should give out that money,’ ” he said. “That didn’t work. That’s why we’re doing this.” 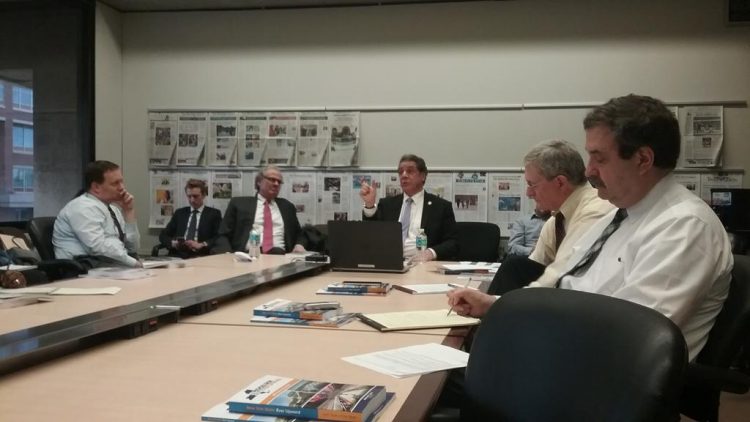 Cuomo acknowledged a new “tension” between him and the Legislature, which he blamed on his refusal to support its terms for a $20,000 annual pay raise last month. He also mentioned Republican Sens. Michael H. Ranzenhofer and Patrick M. Gallivan as well as Democratic Assemblyman Sean M. Ryan – all of the Buffalo area – as failing to adequately support a “Buffalo Billion Squared” plan he said is hampered by an “unnatural constituency.”

Downstate legislators see nothing in the plan for their area, he explained, while even upstate members feel left out by the attention paid to Western New York.

“It’s Buffalo people who should be the natural constituency,” he said, “but they’re on this kick of ‘we should distribute the money.’ What benefit does Mike Ranzenhofer or Sean Ryan or Schimminger get out of it?”

Schimminger was not available to comment on Cuomo’s charges.

The governor's comments underscore the continuing poor relations between the two branches of government in recent weeks. Indeed, The News reported last week that many legislators are expressing wariness of Cuomo’s latest Buffalo Billion initiative after eight of those closely involved in its initial form were indicted last summer by Manhattan U.S. Attorney Preet Bharara on a host of corruption charges.

The SolarCity construction project in Buffalo’s RiverBend industrial park – the biggest part of the original Buffalo Billion – is embroiled in a corruption scandal as Bharara alleges $750 million state investment was awarded to LPCiminelli through a bid-rigging scheme.

[Gallery: Inside look at SolarCity]

Add to that several high-profile upstate economic development projects that have stalled after splashy groundbreakings touting game-changing and transformational ventures.

Some legislators from outside Western New York now say they will examine very closely anything involving the Buffalo Billion program.

“Oh, there’s no doubt about it. We’re definitely going to do some oversight, and there’ll be some hearings about how this money is going to be used going forward,” Sen. Martin Golden, a Brooklyn Republican who is on the Senate Finance Committee, said last week.

But the governor insisted on Monday – in a move some observers say may outline his initial bargaining with the Legislature – that upstate politicians are “not as forceful” as downstate’s and may not be able to carry the program to completion.

“It will be a major issue,” he added.

[Related: Cuomo on his father, Tim Russert and an affinity for Buffalo]

Meanwhile, Cuomo continued his familiar effort of drumming up support for his budget proposals in appearances around the state – including Monday in Syracuse and Niagara Falls.

He again defended his spending plan as fashioned for the middle class, especially with proposals like free tuition for qualifying students at public colleges.

He said the $163 million estimated cost represents just a small fraction of the total state budget.

“This says that I don’t care how rich you are, in what neighborhood you live, which side of the tracks you’re on – you can go to college,” he said. “You want to talk about instilling hope, optimism and belief? It really says the dream is alive.”

And he rejected the claims of private college officials that his proposal will wreak havoc on their ability to attract students, especially at a time when many small, independent colleges are financially struggling.

Cuomo said the state is already subsidizing public college students through various programs, and that the additional dollars will simply “close the gap” for many.

He said he views his school aid proposals with the most optimism because powerful teacher unions will make the case on both sides of the aisle.

And the governor said he is not concerned at this point about some claims that President Trump’s efforts to reform the federal Affordable Care Act will blast a major hole in the state’s budget because of a change in federal reimbursement formulas.

He said the state will face the situation if and when it arises.

“You’re not going to see a meteor hit the Southern Tier,” he said. “If it happens, we’ll deal with it.”