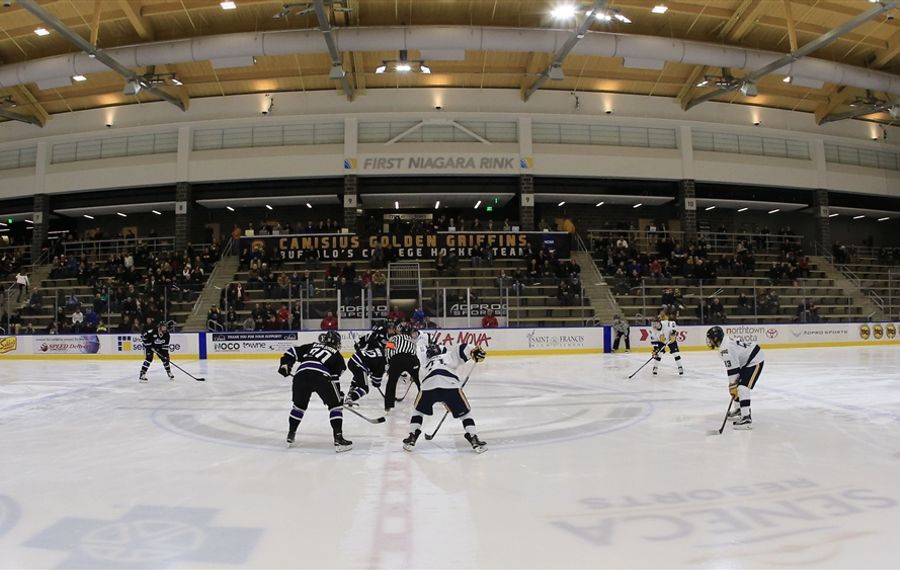 1. Canisius is on a roll. The Golden Griffins returned for the second semester with more scoring punch, which has led to a four-game unbeaten streak. Canisius picked up three points (win and a tie) against Air Force in Colorado then swept regional rival RIT in a home-and-home series. That puts the Griffs in a tie for third place with Robert Morris in the Atlantic Hockey standings. Canisius is 9-4-4 in league play and 10-10-5 overall.

2. The Griffs have found scoring. Goals are coming from every which way for Canisius, with six players in double-digit points. Since returning from the semester break, the Griffs are averaging 2.75 goals per game. They had averaged just 1.88 in their first 17 games. Freshman  Nick Hutchison leads the team with nine goals while junior Ryan Schmelzer and sophomore Dylan McLaughlin share the scoring lead with 15 points.

3. Williams leads the way for Canisius. The Griffs success this year has started in goal with senior transfer Charles Williams. In Friday's 3-1 win against RIT, he recorded 45 saves. It was the sixth time this season Williams has stopped 40 or more shots. He is 4-2-0 in those games.

4. The struggles continue for Niagara. The Purple Eagles remain in the basement of Atlantic Hockey with a 3-13-2 mark, 3-18-3 overall. In their games Friday and Saturday, they lost at home to American International, 7-3 and 7-2. That puts Niagara in last place among the 60 Division I teams in goals allowed per game at 4.42.

5. About last year. Canisius got the best of Niagara, with a win and a tie in the regular-season series. They met in the first round of the Atlantic Hockey playoffs with the Purple Eagles taking the opening game, 3-2, before the Griffs took the best-of-three series with wins of 1-0 and 4-1. This year the teams will meet four times in the regular season.