The Erie Canal Harbor board of directors may have lost more than a trusted board member and workhorse when David Colligan resigned last week.

It also may have lost its quorum.

For more than two years, four of the seven voting members rarely missed a meeting of the Erie Canal Harbor Development Corp. But those in the other three board seats missed more than half of the meetings, when votes were cast for approval of a children’s museum at Canalside and new amenities on the Outer Harbor.

The board has a key role in shaping the future of Buffalo’s waterfront, and can point to other projects like creation of Wilkeson Pointe on the Outer Harbor and building the historically-aligned canals at Canalside. Those serving on the board receive no pay for their work.

No meeting from October 2014 to October 2016 had more than four or five members in attendance.

“It’s a phantom board,” Ryan said. “This board has never conducted itself like an ordinary board, where there is a free flow of information and discussion, and the board members are actually part of the decision-making process.”

John Maggiore, who was appointed to the board March 25, submitted his resignation Dec. 6 without attending a single meeting.

And when he was in attendance, it was always by teleconference.

“I never met Gary Ginsberg,” Colligan said. “I was on the board with him for three years. I never met him in person.”

Colligan has experience serving on boards over the years, including the Buffalo Olmsted Parks Conservancy.

“What you’re seeing is action by a quorum as opposed to the committee as a whole,” Colligan said of the waterfront board. “It’s not unusual for boards to barely scrape together a quorum and get the work done, but what’s unusual about the ECHDC board is that it’s the same four people.”

“Some of the work by the nonvoting members has made it seem more like the kind of interactive board meeting I’m used to,” Colligan said.

Sam Hoyt, a board member and former interim chairman, said attendance at board meetings doesn’t tell the full story of someone’s level of involvement.

“The board members are very engaged,” Hoyt said. “I don’t think that is necessarily reflected by who’s there or the dialogue at board meetings.” 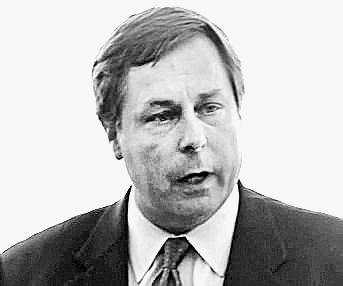 Sam Hoyt is one of four members of the Erie Canal Harbor Development Corp. board who rarely missed a meeting. He's shown in a file photo from Sept. 4, 2012. {Photo by Harry Scull Jr. / Buffalo News}

Hoyt, along with Colligan, Robert Gioia and Michael di Virgilio, rarely missed monthly board meetings, according to a Buffalo News review.

“The fact that Sam Hoyt, former politician, talks a lot at board meetings is a reflection that politicians talk a lot,” Hoyt said. “It shouldn’t be an indication of the kind of level of communication that exists in our policy-making decisions.”

Gioia, the board’s chairman, said he has worked with Hoyt, Colligan and Tom Dee, the waterfront agency’s president, to serve as a “de facto executive committee.”

But Gioia said the other board members receive all of the materials, review them and frequently have questions and offer input.

“Whenever an agenda gets put together, we have a pretty in-depth discussion with other board members to explain issues and get input prior to the board meeting,” Gioia said.

During a 28-month period from Sept. 2014 to Jan. 2017, Makua Mutua missed meetings for 19 straight months, according to attendance records compiled by Empire State Development, the waterfront agency’s parent organization.

Julie Bargnasi missed slightly more than half the meetings during the same time period.

Maggiore failed to attend a single meeting during his nine-month tenure that ended in December.

Mutua, a University at Buffalo law professor, was absent from March 2015 to October 2016. His absence, he said, was due to a one-year sabbatical in Italy, and frequent overseas travel for which he gave speeches concerning his legal and human rights work.

“I was very much in touch with the board during that period,” Mutua said. “I spoke constantly with Robert and Sam, and Tom Dee, and received all the materials for the work of the board and read through all of them.

“I also tried to connect by technology while in Italy, but the satellite connections just didn’t work out,” he said.

Mutua said he is back in Buffalo, attended the past two board meetings and feels “very connected” to what’s going on within the board.

Bargnesi’s attendance has been spotty. The local attorney missed nine of the past 16 meetings. according to the attendance records. She has had previous gubernatorial appointments by Cuomo and before him, Mario Cuomo.

“I make the meetings as often as I can,” Bargnesi said, when asked about her attendance. “I have a very busy legal practice.”

More than a meeting

Hoyt said board members who may not appear engaged often are.

“John Maggiore is a very close senior staffer for the governor and is in conversations with me and Robert Gioia and Tom Dee every couple of weeks,” Hoyt said. “While Maggiore was not a participating board member while he served, he was very, very active in the decision-making and in the advocacy we at ECHDC direct toward the governor’s office.”

“Ginsberg was someone we relied on for guidance, and met with either over the phone or in person on a number of occasions,” Hoyt said. “He brought real expertise to the discussion when it came to his marketing experience or his connections with people who could help us with planning on the waterfront.”

Hoyt said both Maggiore and Ginsberg resigned when it became apparent their job schedules would continue to be in conflict with board meeting times.

Di Virgilio, who works in Washington, D.C., as director of collective bargaining with the Union of Bricklayers and Allied Craftworkers, is often silent during board meetings and usually participates by teleconference. But he is very involved with the board, Hoyt said.

“Di Virgilio is a quiet guy to begin with, but Robert and I, and I suspect Tom, hear from him often, and talk to him frequently about board matters,” Hoyt said.

Hoyt said he also could remember only one time in the previous five years when a meeting was cancelled due to attendance.

“I currently serve on multiple boards, and I don’t know I can say that about any other board I’ve served on,” Hoyt said.

“I would submit to you that the number of actively engaged board members participating on a daily or weekly basis, as opposed to just the board meetings, is a pretty strong reflection of board engagement,” Hoyt said.

“If you survey other boards, I would suggest that in many cases the board’s activity is just showing up to the meeting and voting yea or nay, and waiting the next meeting before they are engaged again.”

Gioia said several people are under consideration to become new board members.
Ryan said he hopes future board members will be people who live and work in Western New York, and have been active in and show familiarity with waterfront issues.

“Putting members on the board who understand our waterfront and how the people use it would be a good start,” Ryan said. “Where are the board members from urban design schools? Where are the Mark Goldmans and the Jill Jedlickas,” Ryan said, referring to community advocates active in waterfront issues.

“These are the people who understand the interaction between people and public spaces. None are represented on this board.”

Colligan, who joined the board in June 2007, chaired the committee that led to the creation of Wilkeson Pointe on the Outer Harbor and has served on advisory committees. He also played a key role in the board’s decision to change course and build the historically-aligned canals at Canalside, and helped promote the “lighter, cheaper, quicker” concept.

He left the board due to the demands of a private law practice, and he’s also one of two Buffalo trustees overseeing the Ralph C. Wilson Jr. Foundation.

Colligan said he would recommend that new members be able to attend the meetings in Buffalo.

“I just think this whole teleconference participation is a false assumption,” Colligan said. “It’s hard to be engaged when you’re not in the room. It’s also hard to participate in dialogue, because you can’t hear what everyone at the table has to say.”

The longtime board member said he’s proud of what the waterfront agency accomplished while he served. Large numbers of people now enjoy the Inner Harbor and the Outer Harbor.

But Colligan said he was at a loss as to why board attendance wasn’t better.

“When I was asked if there was anything I wanted to say, I said, ‘It’s an honor to serve.’ “