Michael A. Altieri Sr.'s first memories of World War II start when he was 15 years old.

He had just returned from a matinee showing of the Buck Rogers serial at the Palace Theater in Schenectady.

"I walked into the kitchen and my parents were sitting and listening to their little plastic ivory radio. My dad looked up and said, 'The Japanese bombed Pearl Harbor.' He wanted to enlist right away with the Seabees because he was a welder and they needed that skill, but they wouldn't take him. He had nine kids," said Altieri, the oldest of the children.

At school the next day, the public address system crackled to life carrying a radio address from President Franklin D. Roosevelt.

"I was in study hall and I remember the president saying that the Japanese attack was 'a date which will live in infamy' and that we were going to war with Japan, Italy and Germany, what they called the 'axis,' " Altieri recalled.

Four years later, Altieri was aboard the Queen Elizabeth oceanliner bound for Scotland.

"There were 17,000 troops and officers on that ship and when the ship started rocking and rolling our food would slide off the tables. All we ate was lamb, if you wanted to eat. The British are big on lamb."

Altieri, who was 18, did not care for lamb. He longed for his mom's homemade pasta during the seven days it took to cross the Atlantic in February 1945. But chow wasn't the only thing on his mind.

There was the unappetizing thought that they might be sunk by a German submarine. So he was happy when he set foot safely on land in Glasgow, though Altieri was not given much time to savor the moment. The troops immediately boarded trains headed to Southampton, England.

"We were put in tents with pot belly stoves for one night in Southampton. It was so cold we ripped up the floor board and burned them. The next day we crossed the English Channel to Le Havre, France," Altieri said. "We were replacements for the Third Army."

From France, it was on to Belgium, where he and other troops were stationed in a sprawling horse barn.

"We were together with soldiers who had been wounded in Bastogne and they wouldn't talk to us because we were green troops. Shortly after that, we were shipped back into France. Then we were put on six-by-six trucks and we headed for Germany."

He says he is blessed that he never had to fire his M-1 rifle during the war.

"We were chasing the Germans but they were retreating so fast that we didn't catch up with them. The only time we got them was when we took a group of them prisoners. There were about six of them and they were in brand new camouflage outfits. We figured they must have worked at prison camps and hadn't had to use those uniforms."

At one point as they barreled deeper into Germany, Altieri said he and other soldiers had the opportunity to assist recently freed Air Force prisoners.

"They were full of lice and we put them on cots for the night. All they said to us was that they were happy to be liberated and wanted to go home."

By early May 1945, it was clear the war in Europe would soon be over.

"We were being held on standby near the Czechoslovakian border. There were five of us living in this one tent and three of us were all 18 and turning 19 that May, one of us on the eighth, the other on the ninth and myself on the tenth. We were betting the war would end on one of our birthdays and it ended on the eighth."

The bet carried no winnings, unless you consider the reward of victory.

"I found out the war ended on the eighth when I looked outside our tent and someone had nailed a typewritten statement from company headquarters to a tree saying the war was over. I took it down and kept it. I still have it." 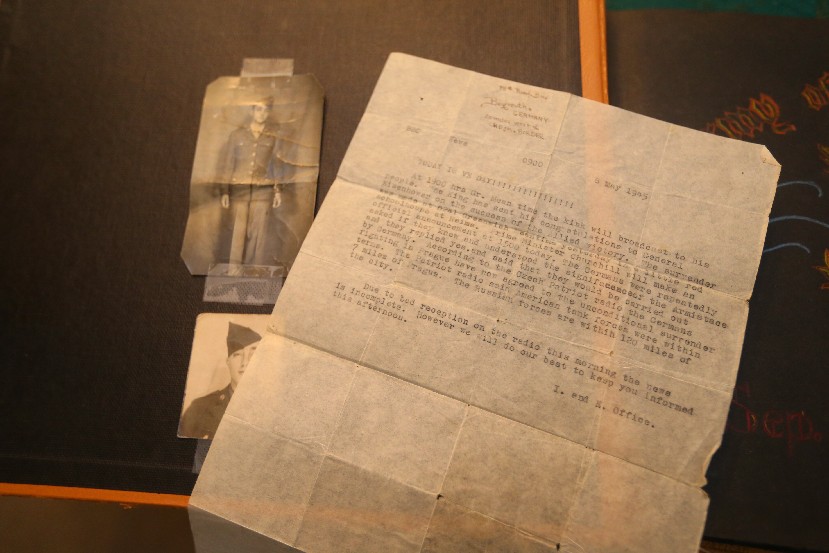 Michael A. Altieri Sr. kept this copy of a statement announcing the end of World War II that had been posted on a tree beside his tent in Germany. (John Hickey/Buffalo News)

As the good news spread throughout the camp, Altieri said he and other soldiers gathered in a clearing with a keg of "liberated German beer."

But the victory celebration had hardly begun when there was a scare.

"Three or four German fighter planes, apparently coming from Czechoslovakia and getting away from the Russians, flew low over us. It gave us pause for concern, but they didn't open up and fire on us. They tipped their wings at us and landed nearby."

As part of the Occupational Army in Germany, Altieri said he found time to take two art courses at night at the University of Heidelberg. He returned home to the United States in 1946 and continued his education at the University at Buffalo, eventually settling in Buffalo with his wife, the former Nancy DiCerbo.

"I went to college at night at UB and earned a degree in sociology and in the day I worked as a human resource specialist for the IRS," Altieri said.

The Altieris are the parents of four children, six grandchildren and five great-grandchildren, with two more – twins – expected in June.

Of his war service, Altieri says, "Most of my buddies are all gone and I wake up every now and then from a dream of where we were and what we did, particularly in Munich, which was my home for about six months."

It was there, he added, that he met Gen. George S. Patton, the Third Army's commander.

"He was conducting an inspection and he said to me, 'How you doing soldier?' I said, 'Fine, sir.' He was dressed in his uniform and had his pistols on. He was all spit and polish. What was really unique was that he had a high-pitched, squeaky voice."

Be that as it may, Altieri says he treasures his brief exchange with Patton.