You might have thought the University at Buffalo and Western Michigan were playing basketball wearing brass knuckles Saturday if you were sitting in the top row of Alumni Arena. It was more of a brawl than a basketball game.

One sarcastic and erudite UB fan hollered in the second half: “It’s like the Crimean War out there!”

No matter, they don’t give style points in basketball.

UB might be starting to embrace the idea that it must win games with defense and rebounding.

“We’ve just kind of decided we’ve got to make our M.O. be that we’re just going to keep guarding,” said UB coach Nate Oats. “We can’t let whatever happens on offense affect our energy on defense. For the most part we did it tonight.”

UB ranks eighth in the Mid-American Conference in scoring. The Bulls are 11th out of 12 (and 308th in the nation) in three-point shooting percentage.

The offense is inconsistent at best. But the Bulls are athletic and long-armed on the wings and in the backcourt. Saturday was their fourth good defensive showing in the last five games.

“I think we’re starting to get it,” said UB senior Blake Hamilton. “Kent State was another game that was a grind-it-out win. Offensively we have players who are good enough, but if we focus on defense, get stops and play in transition, that’s when we’re at our best.”

UB guards Dontay Caruthers and C.J. Massinburg held Western Michigan point guard Thomas Wilder to 13 points, 4.5 under his season average. Wilder had six turnovers, no assists and made just 4 of 14 shots. Western’s other starting guard, Reggie Jones, was shut out. He averages 9 ppg.

“I thought the biggest story of the game was Buffalo’s guard play,” said Broncos coach Steve Hawkins. “It don’t know that it has happened this year where teams have been able to shut down Thomas and Reggie both and make them struggle from the field like they did.”

“C.J. came out the second half and really guarded,” Oats said. “Caruthers has kind of been our defensive stopper at the guard spot. But when Caruthers got his fourth foul . . . C.J. stepped up.” 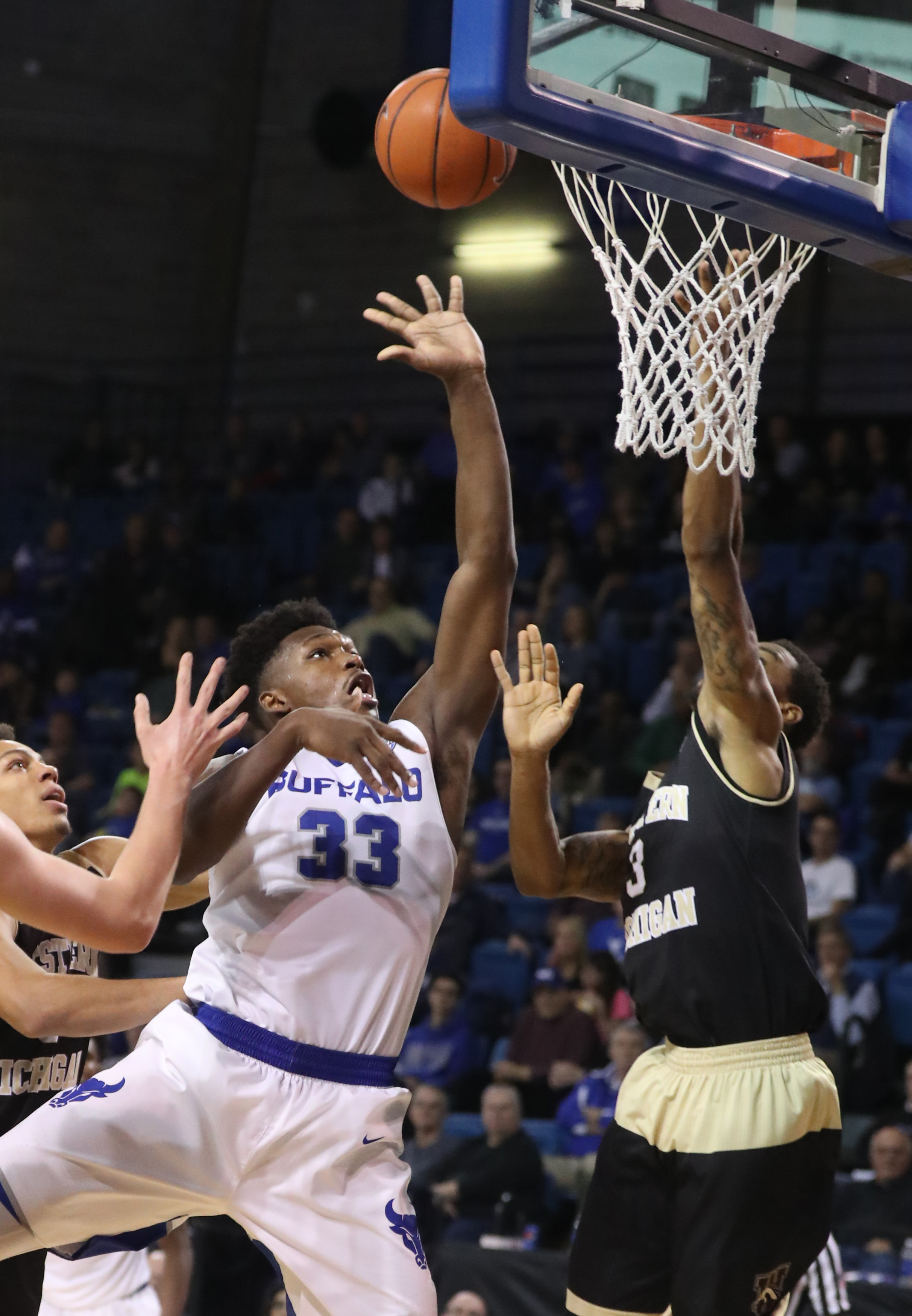 Western Michigan, which had been shooting 45.4 percent from the field, hit just 32 percent for the game. UB held a 20-8 edge in points off turnovers and a 13-2 edge in fast-break points.

That made up for some ugliness on the offensive end. UB missed its first seven shots (and they were mostly good ones). Thirteen minutes into the game, UB had made just 5 of 23 shots (21 percent) with seven turnovers.

UB’s offensive ship got righted a bit by the play of the 6-foot-6 Hamilton, who handled the point-guard duties after the shaky start. He had 15 points, nine rebounds, 10 assists and just two turnovers.

The Bulls also did a good job of pounding the ball inside to 6-8 sophomore Nick Perkins, who scored 21 points and grabbed 10 rebounds. Perkins hit 9 of 10 free throws.

“Nobody in this conference can guard Nick when he’s playing his best and using his body,” Hamilton said.

Oats has been pushing Perkins to assert himself near the basket.

“Defensively, we’re coming,” Oats said. “Hopefully the offense catches up here some time before the end of the season. If it does, we’ll be pretty good.”