Dean Eoannou admits he had his doubts at first. Wendy Casey was a UB freshman when she walked into his boxing gym at Clark Hall back in 2003, looking for a competitive outlet and a way to lose weight. She was sweet, but maybe too sweet.

"When she first came to the gym, she was making cupcakes and stuff," Eoannou recalled. "I wouldn't put her in the ring. I said, 'This girl's going to get killed, start crying."

Casey was literally bringing cupcakes to the gym. Come on, a young woman ventures into a traditionally male domain, looking to take part in a punishing sport, and she shows up with baked goods? Either she was hopelessly naive, or a lot tougher than Eoannou thought.

But Casey, who had been a champion wrestler at Binghamton High School, often fighting against the boys, kept showing up and doing some easy sparring. She kept pleading to get in the ring. He kept saying no.

Finally, Eoannou, who quit his job as a production manager at Ford to train boxers full-time, relented. He let Casey get in the ring with a talented young boy. That's when it hit him that this sweet, smart, giggly young woman had a killer lurking inside her.

"I can still see it. We're walking into the ring and she's laughing, saying 'I got this,'" Eoannou said. "She walks through the ropes and a different girl comes out the other side. I'm like, 'Oh my god, this girl's got it."

Casey was a natural fighter and an intellectual match. Eoannou has an education degree from Cornell. He taught a course in boxing at UB and co-wrote a book on the subject. She would eventually get a degree in math education from UB and a masters in literacy education from Canisius College before becoming a teacher.

Boxing is an often brutal sport that has fallen out of favor over the years. But in its purest form, it is a blend of the physical and the mental, a place where science, math and athletic skill converge. That's where the mentor and student clicked. 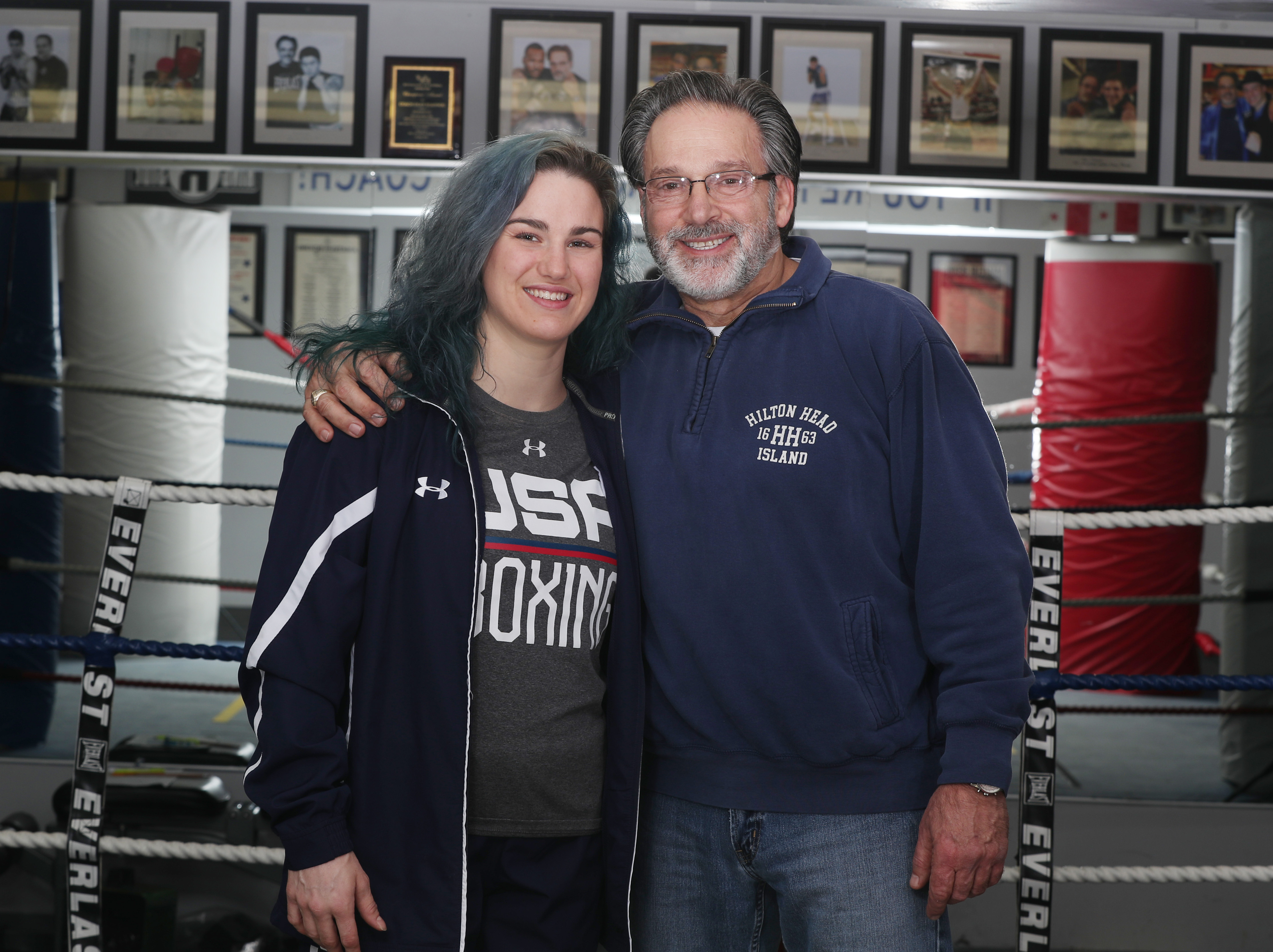 "Oh, yeah," Casey said. "It's like a chess match. That's really the best way to describe it, and that's one reason he likes training girls so much, because they listen and they learn the routine and the physics of it.

"I'm a math person, so it works really well for me. I understand and I'm able to process it. It makes sense, and that's one reason I really latched onto it, along with the physical aspect of it, which I like."

Casey proved no cupcake. She took to boxing and was soon holding her own against the best women in the state, then the country. She won three state Golden Gloves titles. In March of 2008, an unranked entry, she finished second in the nationals at 138 pounds to top seed Quanitta 'Queen' Underwood.

She was close to the top of an evolving sport. Casey knew women's boxing would be in the Olympics for the first time in 2012. In fact, Underwood made the three-woman team that represented the United States in London.

But shortly after losing to Underwood in '08, she quit boxing. Casey wasn't fond of the politics in the sport. She felt she had deserved the decision against Underwood. "Someone once said that Dean has been robbed so many times he should open a 7-11," she said with a big laugh.

More significantly, Casey was beginning to student teach, which required her to get a side job to make ends meet. Boxing wasn't worth the time anymore.

Casey got a job teaching seventh-grade math at Westminster Community Charter School in Buffalo. She got her masters in literacy education from Canisius College in 2014. Math and reading are intimately connected, like the elements of a good punch. You can't solve math problems if you can't read.

Wendy Casey says she's in better shape at 31 than she was in her 20s. (James P. McCoy/Buffalo News)

She always loved a challenge. Her high school wrestling coach, Kevin Pendergast, laughed when she tried out for the boys' team at Binghamton. She became a two-time girls national champion. To this day, she considers Pendergast, a math teacher at Binghamton, a friend and mentor.

"I like to win," she said. "I like to be the best. I don't know if I ever had any crazy ideas as a child, but my parents always told me if you work hard, you can do anything you want."

Her father owned his own business, Thomas Casey Construction. Her mother was a housewife, for which she is eternally grateful. She has an older brother and sister, who weren't athletes but toughened her up as a child.

Casey was out of boxing for seven years. Eoannou, who had told her she was making a mistake, kept in touch, but never pushed her to return to competition. When a young female fighter came along, he would sometimes ask her to work with the girl.

Two years ago, Casey was sparring with Hannah Krueger at Eoannou's gym in the basement of the Fitness Factory on Delaware Avenue in Kenmore. He thought she looked good. He asked Casey if she would get in the ring with Timi Akeredolu, one of the top 165-pounders in the country.

"Now, he wasn't going to hit her," Eoannou said. "She was just going to work his defense. I just wanted to see what she had."

Akeredolu said he didn't need to wear headgear. "Are you surrre?" she said. "You've seen me hit."

He went without headgear. "Thirty seconds later, we were checking him for a broken nose," Eoannou said. "Honest to god, it was unbelievable."

After determining that Akeredolu's nose was not broken. Eoannou looked up at Casey in the ring and said, "You still got it. Do you want to take another go?'

Naturally, Casey was rusty. It took time to get back to where she was in 2008, but she was 'going big' again. She went to a pre-Olympic qualifier in the fall of 2015, but she knew she wasn't ready. It was too late for the Olympic team.

But in 2016, blue hair and all, she hit her stride and was better than ever.

Casey won three major featherweight (125-pound) titles this past year: The National Golden Gloves, the Ringside World championships and, finally, the U.S. nationals last month in Kansas City. In the title match, she scored a technical knockout over Trudy Li of Brooklyn in the third round.

"She hasn't been in a good fight in all those tournaments," said Eoannou, 63. "She just walks through everybody. She's a huge, heavy puncher. She can fight left-handed, right-handed, can counter punch. She likes to fight inside, body and head. She's relentless."

The national title earned Casey a spot on USA Boxing's elite national team. She's receiving funding from the national body and will soon travel to Colorado Springs to train and prepare for upcoming international tournaments.

So Casey is on a fast track for the Tokyo Olympics. The problem is, there are only three weight classes in women's Olympic boxing: 112, 132 and 165 pounds. There's talk that two more weight classes for the 2020 Games. She and Eoannou are hopeful that she'll be able to fight at her preferred 125-pound weight.

At 31, she's old for a rising women's fighter. Eoannou says she's the smartest fighter he's ever coached, someone who processes information in the moment and never panics. Wendy believes that her experience and the wisdom imparted by her coach give her an advantage.

"I do," Casey said. "They say women mature a little later in life physically. They're more physically mature in their 30s. I've seen that in myself, anyway. But yeah, it's never too late to go for your dreams. Don't dream small, you know? Why can't I go to the Olympics?

She's happy and confident, in a good place in her work and her life. You can tell by her deep, infectious laugh, which fills the gym. In May, Casey will marry Benjamin Abdallah, an accomplished pianist. She said she knew he was the one the first time she heard him play.

"I still bring cupcakes, too," she said.