In eight hours they would join a massive crowd of at least 500,000 protesters determined to show the new president that they don't support his ideas about how to make America great again.

"I'm marching for my friends and family," said Siana, a student at Olmsted #156 in Buffalo. She wore a whimsical outfit to make her mark at the event - a giraffe costume with a crown of flowers. She explained she was showing she was "taking the high road."

The Women's March on Washington, a women-led gathering, aimed to bring together women and men of all colors, as well as immigrants, Muslims and the LGBTQ community, groups that many on the left feel Trump targeted and scapegoated during his campaign. 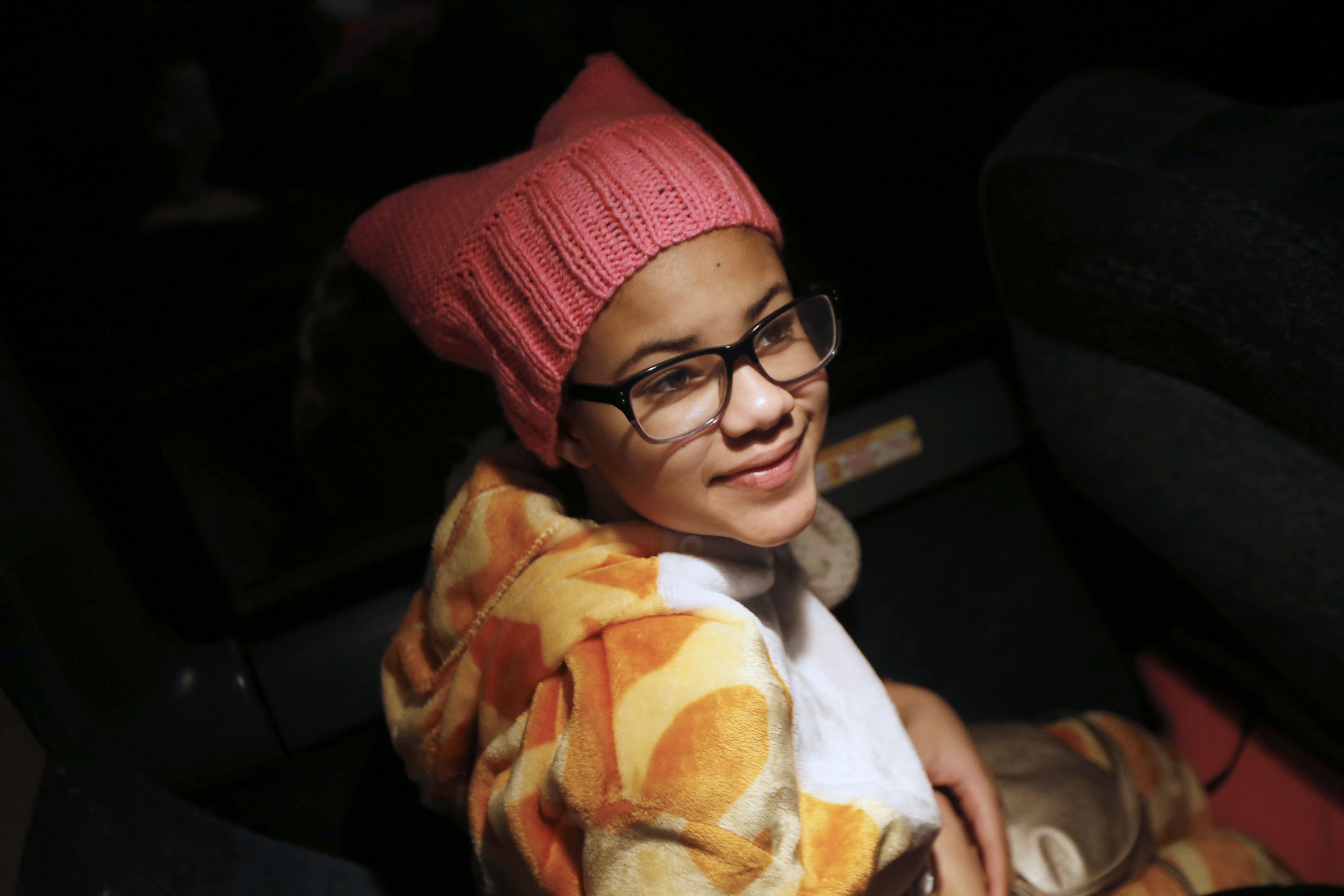 Siana Akauola, 11, was the youngest member of the group traveling by bus from Buffalo to the Women's March on Washington. (Robert Kirkham/Buffalo News)

The rally and march drew a lineup of women activists and Hollywood celebrities, from feminist luminaries Gloria Steinem and Angela Davis to actress Scarlett Johanssen and R&B star Alicia Keyes. Organizers had initially guessed about 200,000 people would come. Estimates Saturday were well over double that number.

Independence Avenue was a sea of pink "cat" hats - a reference to the vulgar comment Trump was recorded making about grabbing women by their genitals - worn by a jam-packed crowd of mostly women but many men, too.

For his part, Trump, who frequently attacks critics on Twitter, didn't tweet once about the massive protest on his first full day as president, at least as of 10:30 p.m. Saturday.

At least 1,200 buses made their way to Washington, D.C., from around the country. Six buses drove 400 miles from Buffalo. 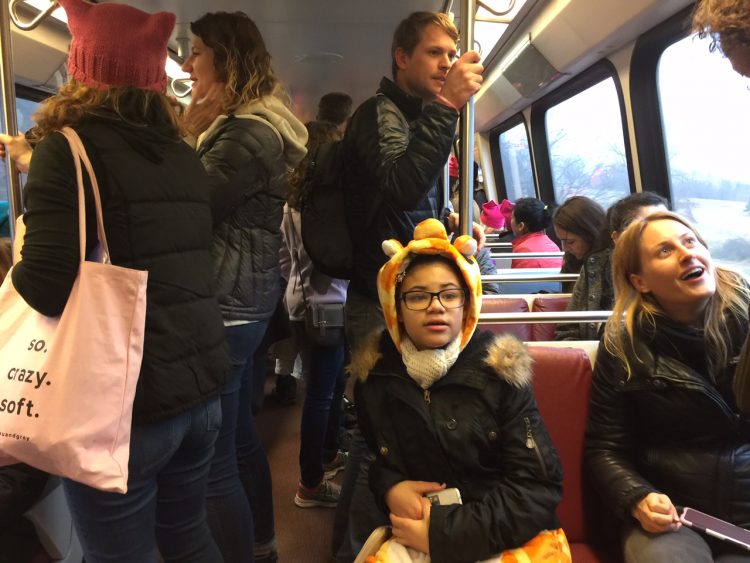 Maureen Milligan organized one of the buses after she couldn't find a spot on an affordable one.

The Buffalo lab administrator marveled at how seamlessly the trip came together. She filled all 56 seats within three days.

"I only know 10 people," she said. A woman who heard about the bus delivered a bag full of pink knitted hats. Another, crushed she could not come along, baked chocolate chip cookies for the marchers.

Then came some logistical concerns, like getting tickets to ride the Metro in Washington. An old friend of Milligan's saw her plans on Facebook and stepped in to help. He bought the protesters prepaid metro cards to help them avoid the snaking lines. "It's amazing," Milligan said. "It all came together."

The pink hats became a badge of honor for many on the bus. Deb Marfoglia, a retired banker from the Town of Tonawanda, said it was an act of protest. "We elected a man who said he grabbed a woman by the [genitals]."

"We're displaying them proudly," said Nicole Bundy, who works at the Lexington Co-op. 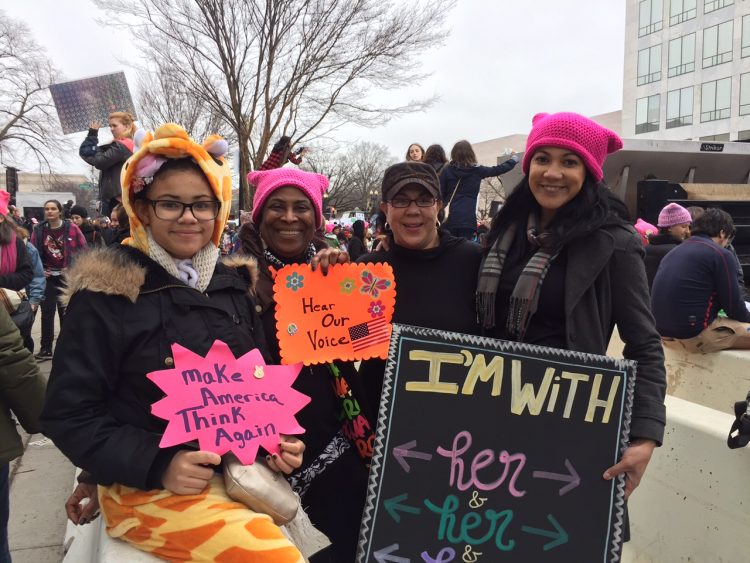 As their bus traveled through the night from Buffalo, Valerie Akauola recounted Saturday that her own great-grandmother, who taught in a one-room schoolhouse with dirt floors, had marched with Martin Luther King Jr.

"She's with us," Akauola said of her great-grandmother. "I feel that she is."

Their bus arrived at about 7 a.m. in Arlington, Va. After breakfast at a Starbucks crowded with protesters from all over the country, Siana, her grandmother and their friend, Athena Mutua, made their way to the Metro.

The platforms there were packed with women, many carrying signs. "Please do not enter the train station," a Metro worker implored over the sound system.

"It's crazy," Siana gasped as her group squeezed into an impossibly full Metro car. 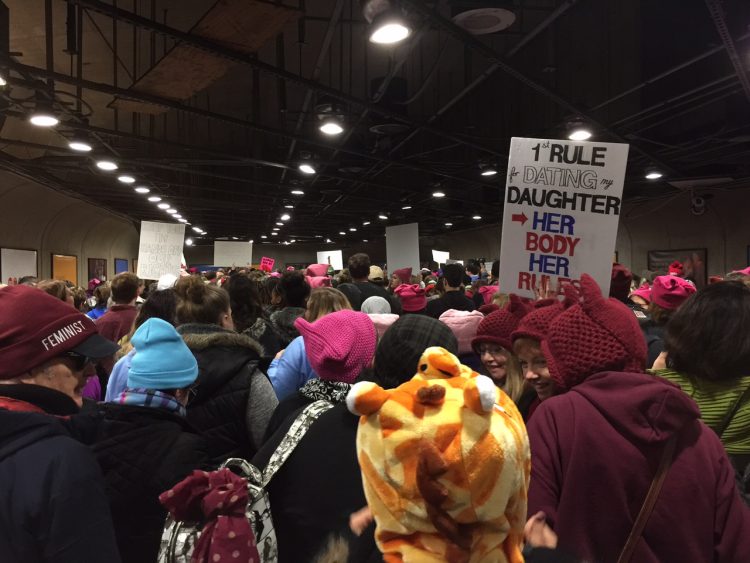 Siana Akauola and her family were among hundreds of thousands of people who took part in the Washington, D.C., march. (Maki Becker/Buffalo News)

They emerged near the rally site on National Mall, an even more crowded scene.

Protesters could barely move during the rally, which stretched past four hours. People squeezed past each other in an effort to get closer to the stage and then later to try to get out of the crowds. As anxieties grew about people getting crushed, some chanted "March! March!" 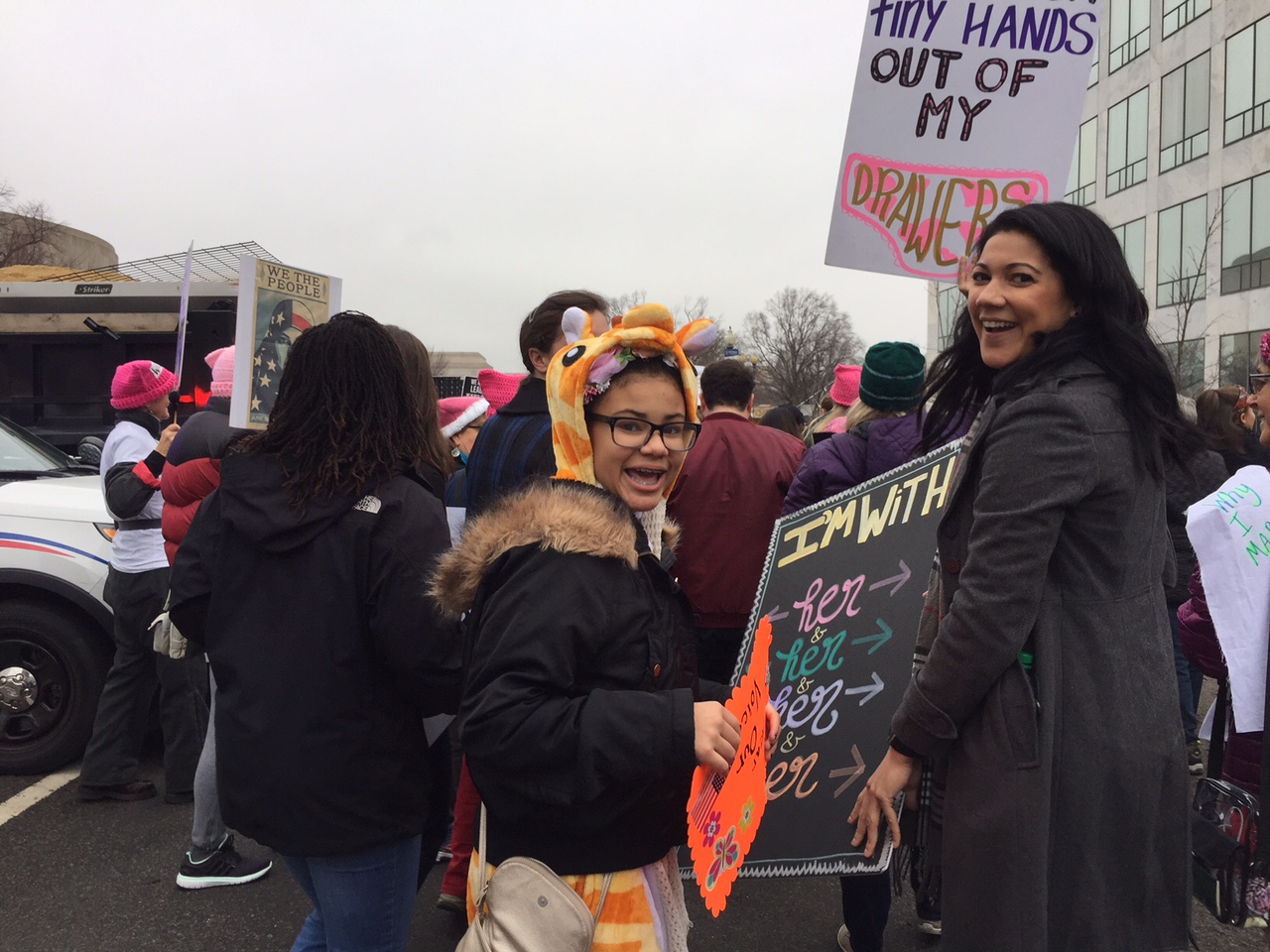 Siana somehow managed to meet in the crowd her aunt Billie, who carried a sign that read "I'm with her" with dozens of arrows, a play on Hillary Clinton's campaign slogan.

For Siana and many others, the crowd was overwhelming as people tried to get a glimpse of the speakers and to take in their fiery calls to fight the power.

But in the end, as they squeezed through the crowd, Siana said she felt inspired. "I'm going to make better choices, maybe do better in school," she said.

Her grandmother believes the experience of being at this rally will leave a lasting impact.

"This is one of those priceless things that you don't get in a classroom," Akauola said. "She's just 11. But these young people come up with great things. They're brilliant. She'll end up doing something with this."