Stuart Strickland remembered his father's stories about the most harrowing moment in his life, when William R. Strickland saw the out-of-control freighter Michael K. Tewksbury topple the Michigan Avenue lift bridge into the ice-choked Buffalo River just before midnight on Jan. 21, 1959.

This weekend, Stuart Strickland plans to travel from his home in Pittsburgh to join others with memories or family lore of the Tewksbury disaster at 2 p.m. Saturday in the Tewksbury Lodge in River Fest Park, 249 Ohio St.

"He told the story a few times, around the campfire, that sort of thing," said Stuart Strickland, who was proud enough of the incident to mention it in his father's 1995 obituary.

About 100 people are expected to attend the event discussing the disaster, which happened when a period of bitter cold was interrupted by a sudden thaw and wind-driven rain on Jan. 21. The weather change broke up and moved the thick, packed ice clogging both the Buffalo River and Cazenovia Creek, and the floes shoved the freighter MacGilvray Shiras, which was tied up for the winter beside the Concrete Central Elevator at the foot of Smith Street.

When its mooring lines snapped, the MacGilvray Shiras, the length of a football field, drifted downriver, navigating three right-angle turns before ramming the Tewksbury, which was tied up at the Standard Elevator near the foot of St. Clair Street. Both boats passed beneath the Ohio Street bridge, which was raised for the winter. 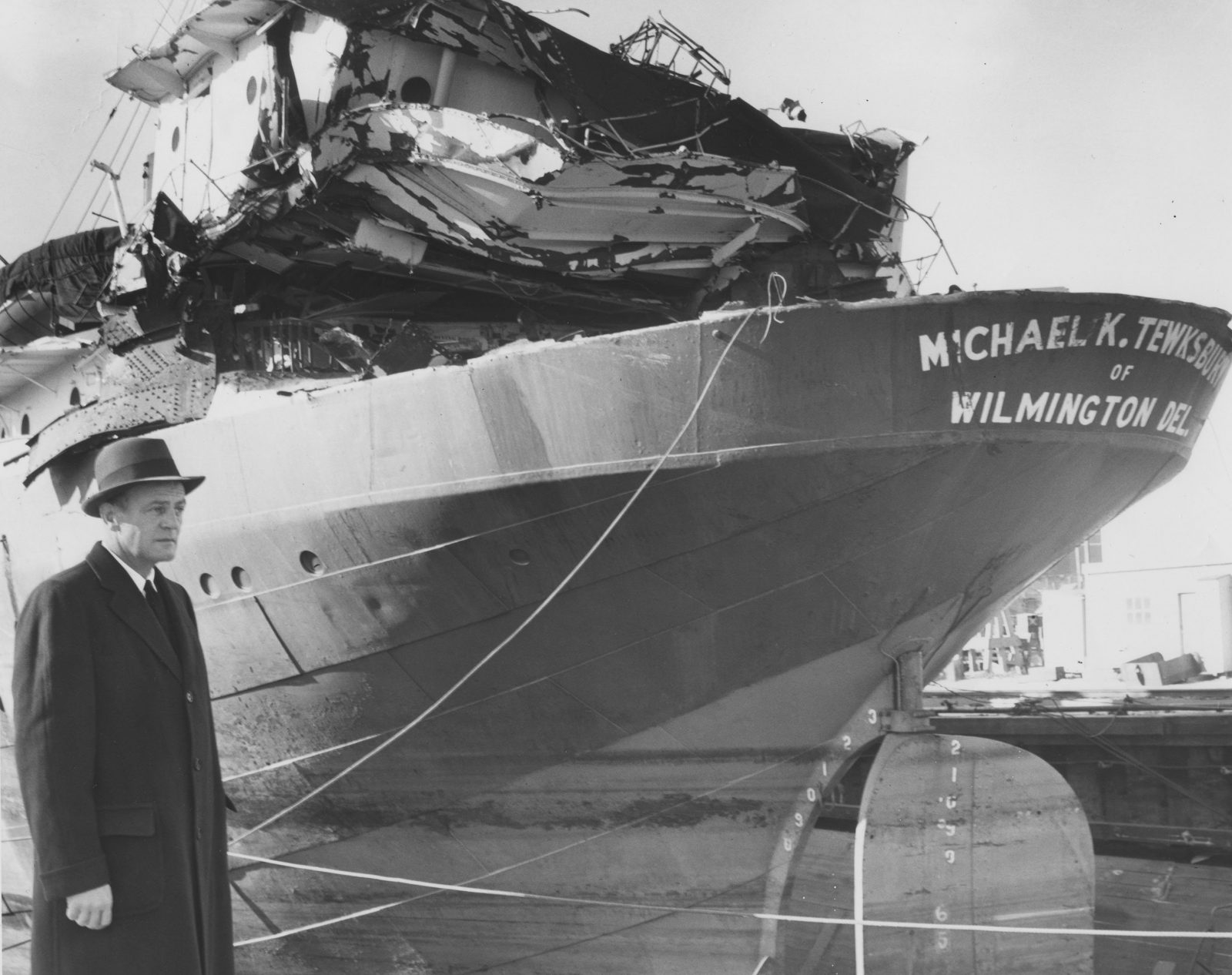 Michael K. Tewksbury, president of the Midland Steamship Lines, surveys the damage done to the ship that bore his name after the crash. (Courtesy of the Buffalo History Museum)

But local lore says that the crew of the Michigan Avenue lift bridge had abandoned their posts for the warmth of the Swannie House and could not raise the bridge in time before the Tewksbury smashed into it at 11:17 p.m., demolishing it, and wedging itself across the river.

The new dam created by the freighter and the bridge diverted a flow of frigid water and thick ice floes over the banks, flooding an 18-block area and bringing, according to the next day's Buffalo Evening News, "terror and distress and losses" to hundreds of residents.

"Jan. 21, 1959, will go down as one of the worst dates in the area's long history of weather disasters," The News reported in a extensive Page 1 story the next day. All the Buffalo River bridges were imperiled by the backup of water, Republic Steel on South Park Avenue and Maritime Milling Co. on Hopkins Street were flooded and closed, and people fled in their night clothes as "ice cakes -- some 35 feet by 25 feet and 3 feet thick -- caved in walls, opened cellars to the flood, slammed autos around like chips, uprooted trees and knocked down utility poles," The News reported.

Six days after the catastrophe, when residents were still mopping up from the devastating surge of ice and frigid water, William Strickland told his story to Courier-Express columnist Jerry Evarts. Strickland said he had left his Sirrett Street home late that night to check the ice along the river. As a Civil Defense motorcycle messenger, he had in his truck a box of flares and a flashlight that threw a red beam, which he had received as Christmas gifts from his wife, Joan.

When Strickland saw what was happening, he told Evarts, he ran to Standard Elevator on St. Clair Street and alerted a watchman, who phoned the Coast Guard and the bridge tender. As a witness in federal court on April 17, 1961, in one of several multi-million-dollar lawsuits caused by the disaster, Strickland testified that he went to the bridge when he saw the MacGilvray Shiras and Tewksbury approaching. He testified that he saw someone stopping highway traffic and watched the bridge rise slowly, about 8 feet.

Then, Strickland testified, he saw a man run from the bridge, moments before the Tewksbury crashed into it, throwing the 130-foot-tall south tower and the bridge structure onto the ice-choked river below.

An operating engineer and a bridge tender were treated at a hospital for injuries they suffered as they raced to get off the bridge. The next day, a third operating engineer, William W. Mack, who had escaped injury, said that the three had used a gasoline engine to raise the bridge about 20 feet before realizing they had to "run for our lives." 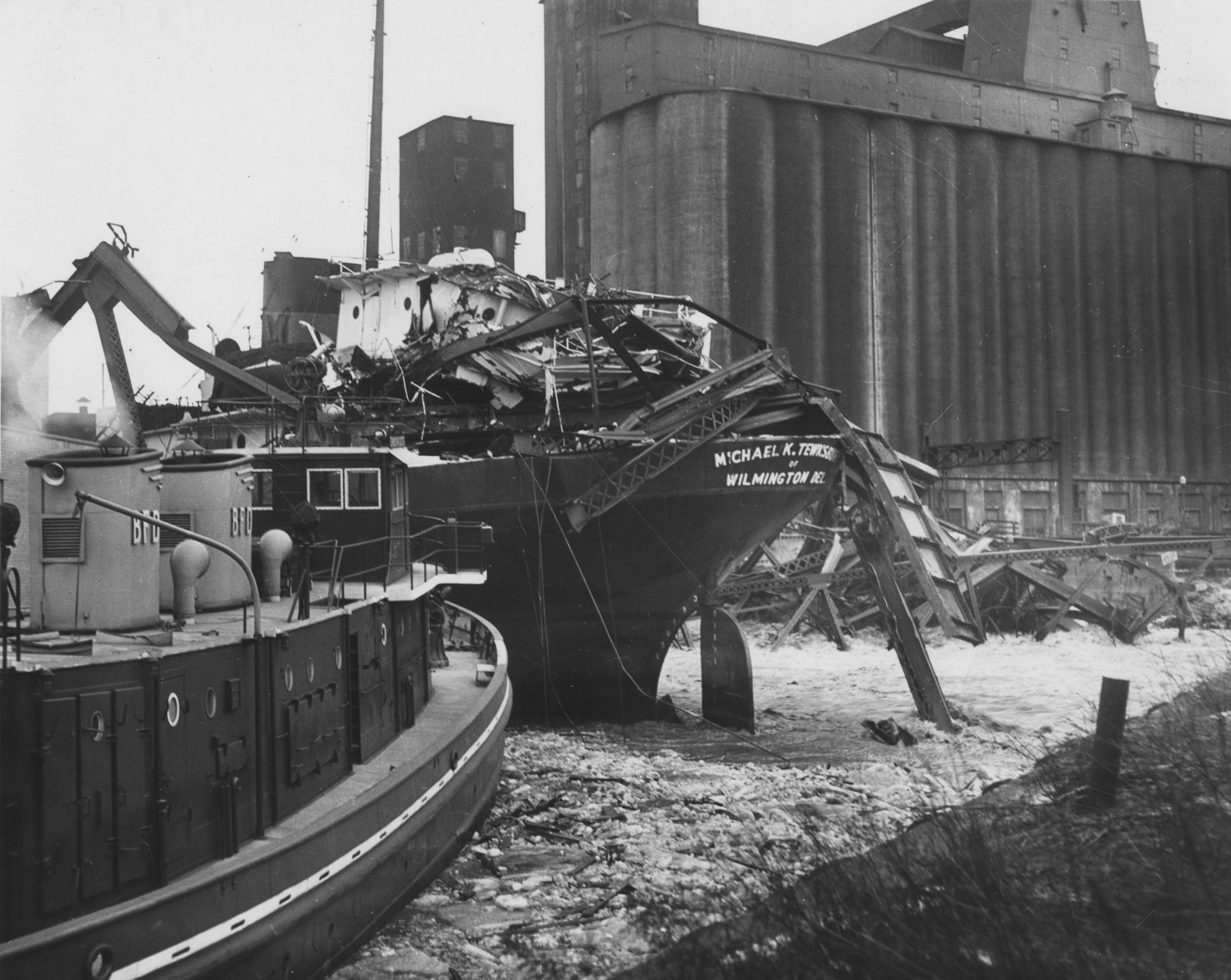 The crash toppled the Michigan Avenue Lift Bridge and flooded the Old First Ward. (Courtesy of the Buffalo History Museum)

Strickland told Evarts that he placed his flares and emergency flashlight on the ground on Michigan Avenue to alert motorists that the bridge was out. Then, he said, he jumped in his truck, drove to the other side of the bridge via the Skyway, and set up flares there too.

The north tower of the bridge fell at 7:45 a.m. the next morning, crushing the roof of Connelly Brothers Ship Chandlery at 169 Ohio St. and knocking out sidewall timbers of the Engine 20 firehouse at 155 Ohio St., home of the Edward M. Cotter. The Cotter itself was trapped in its berth by the wreckage.

Staurt Strickland's family story will be just one of the many shared at the event Saturday, said Peg Overdorf, longtime executive director of the Valley Community Association.

She has organized events marking the Tewksbury for several years, modeled on a 2009 commemoration of the 50th anniversary. Overdorf also named the lodge, which opened in late June in River Fest Park, as an homage to the freighter that came to rest in the Buffalo River near the site of the park. The Lodge is a non-profit operation whose income helps pay the expenses of the park.

People with memories of the disaster and the devastation that followed will speak at the event, which will be moderated by local history buff Gene Overdorf. Retired Monsignor Al Clody, who was 18 at the time of the disaster, was deployed as an auxiliary Buffalo firefighter to help residents with flooded basements and other damage. Clody plans to read his narrative poem, “The Demise of the Michigan Avenue Bridge.”

Strickland, who was born two months before the Tewksbury disaster, left the area in 1982 for Pittsburgh, where he has a wife and two adult children. His mother is also deceased, but two siblings still live in the West Falls area. Still, Strickland said, "I never left Buffalo mentally. To me, it's still home."

Overdorf said she continues to hear new stories about the Tewksbury. Just this year, she learned that power was lost at Mercy Hospital, and spoke to two men who were in the newborn nursery when the power supply was lost and generators were flooded.

For Saturday's event, organizers will collect a donation of $5 per person, and the lodge’s kitchen will serve food and beverages.