In a photo that appeared in this newspaper on Aug. 8, 1996, the young artist reaches up to the newly plastered wall of Manny's Supper Club, at 471 Delaware Ave., to put the finishing touches on his elegant illustration of a lion resting on a marble plinth.

In the picture, one of the lights building owners installed to illuminate the mural was already hanging by a wire.

Soon, those lights went dark. The plaster cracked. And Manny's Supper Club, where the likes of Frank Sinatra and Marilyn Monroe were said to have dined, closed.

And over the years, pieces of Cravotta's proud lion flaked off like so much dandruff to reveal the bright red bricks beneath.

But more than 20 years later, the lion's face and tail remain visible. Most Buffalonians can tell you exactly where the mural is. And Cravotta's iconic piece, which he painted as a 25-year-old at the start of his career, stands as a tattered symbol of Buffalo's resilience.

"As long as the face is intact, it will survive," he said. "I think when the eyes or the nose or the mouth go, it’s gone."

Fortunately for Cravotta, the building's new owner, Scott Croce, is an avowed fan of the lion even in its current state. A picture of it hangs in his office. Though he said he may eventually build on the empty corner lot next to the building, he has already spent $10,000 with the local firm Abraxis Masonry Restoration to shore up the plaster and repoint the brick on the building's south face. This has effectively halted the mural's degradation.

Croce, a developer and chiropractor with offices across the street from the building, said he plans to convert the historic brownstone into residential and office space.

"It's not falling apart any more and it's got a little patina to it," said Croce. "I think it looks great coming through some of the bricks." 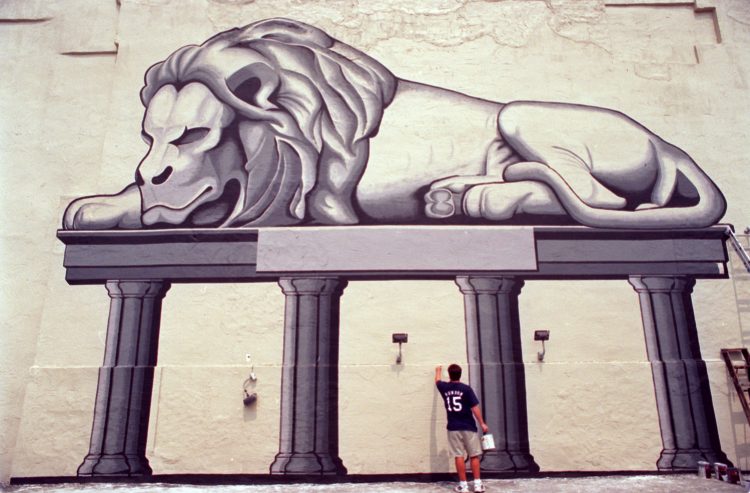 Twenty-five-year-old Frank Cravotta, in khaki shorts and a New York Yankees jersey, puts the finishing touches on his new mural on the side of Manny's Supper Club on Aug. 7, 1996. (Mark Mulville/Buffalo News)

Cravotta, now executive vice president of creative services at Pegula Sports and Entertainment, took on the project after gaining notoriety for a Georgia O'Keeffe-inspired mural of a cow skull, long ago erased, on an exterior wall of the Steer restaurant in University Heights.

From his office in PSE's headquarters in the Fairmont Creamery building, Cravotta recalled how he settled on the mural and the location.

"There’s the granddaddy of walls," he recalled thinking to himself. "I mean, not only is it a huge, beautiful canvas, but that section of architecture is unlike anything else in Buffalo. You have those brownstones, you have a full view as you’re coming up Delaware. You can’t beat it."

Armed with a copy of a front-page Buffalo News photograph of his Steer mural and a few ideas, Cravotta approached the new owners of Manny's about adorning their newly plastered south-facing wall. After seeing a sketch of his concept, based on the granite lion statues at the McKinley Monument in Niagara Square, they eagerly accepted.

Cravotta, inexperienced with art commissions, earned less than $1,000 for the piece after expenses. He rented his own scaffolding, and in the time before night-time projection and remote cameras, climbed up and down hundreds of times to gauge his progress. Occasionally, he paused for a free lunch at Manny's. 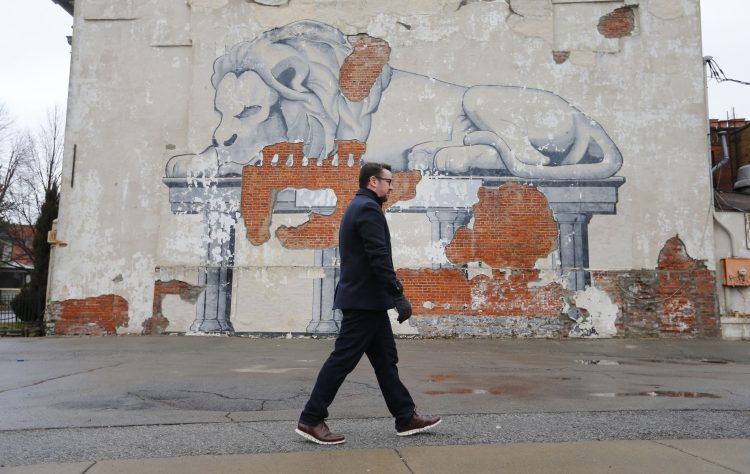 Artist Frank Cravotta walks past the mural he painted in 1996 on a the building at the corner of Delaware Avenue and Virginia Street in Buffalo on Thursday, Jan. 19, 2017. (Mark Mulville/The Buffalo News)

To complete the mural, he also had to conquer his fear of heights -- a serious liability for a public artist.

"The first time I got to the top of the scaffold, I literally laid on the top because I was so scared. By the end of it I was like a monkey climbing up and down," he said.

Because of the plaster surface and the mural's classic iconography, Cravotta's piece was almost instantly ancient. Many admirers might be surprised to know that it was painted in the 1990s, because it looks like a carryover from a much earlier period in Buffalo's history.

"It is not seen as modern or stylistic. It is a tattoo for lack of a better term. You just know what it is," he said. "I see it as it’s a survivor, like the city’s a survivor. It’s got warts, like the city. It’s still standing after all this time, just like us."

Cravotta also credited his early mural work, including the lion mural and a subsequent rendering of a dancer from "Stomp" in the Elmwood Village, with launching his career. He was hired at Hadley Exhibits after a creative director there spotted his "Stomp" mural. Later, he moved on to the Buffalo Sabres and finally Pegula Sports and Entertainment, where he oversees a team responsible for producing in-house creative work for the growing Pegula empire. 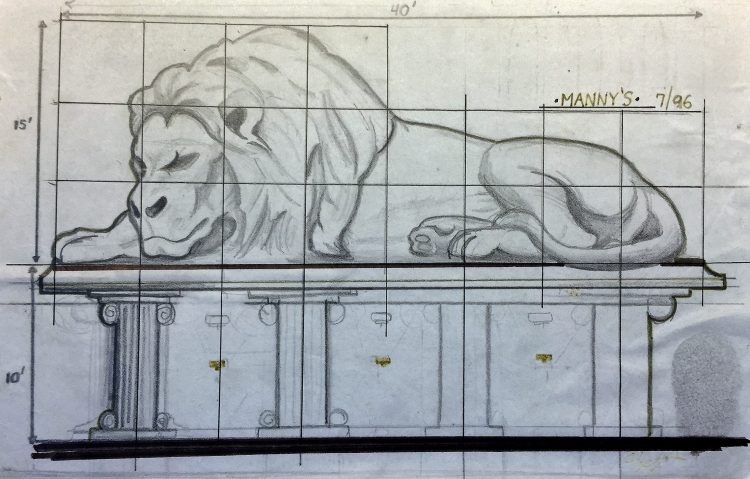 Frank Cravotta's concept sketch for his 1996 mural helped him clinch the deal with the owners of Manny's Supper Club to paint on the south wall of 471 Delaware Ave.

Jeff Moyer, a real estate agent with Gurney, Becker & Bourne who successfully sold the building to Croce last year for more than $600,000, said many of the potential buyers praised the mural, calling it "a fixture of Allentown" and a city landmark.

"Most people familiar with the city know exactly where 'the lion' sits, watching over the corner of Delaware and Virginia," he said, adding that he hoped the mural would remain and the new owner will "keep the roar alive for years to come."

For Cravotta, who said he would love to be able to re-trace the original line drawings on the red brick, looking back on the piece and how it has been embraced by the city makes him grin with pride.

"I never, ever thought that I’d see it on T-shirts, that it would become this institution, or that we would be sitting here 20 years later talking about it. I was a kid literally trying to make ends meet," he said. "I’m proud of it, and I’m proud of the city, too."