Amherst fans may have been chanting “we own Main Street” following the nightcap of the boys-girls basketball doubleheader Friday night between the Tigers and rival Williamsville South, but that’s only partially true.

It was a fun atmosphere nonetheless.

Round two of the Battle of Main Street between Williamsville South and Amherst definitely lived up to the hype and the rivalry's nickname. Two battles, split between the ranked Western New York teams.

The nightcap made orange and black fans happy as No. 6 Amherst rallied from an 11-point third quarter deficit to beat No. 2 Williamsville South, 71-61. It’s believed to be the Tigers’ first win in three years over the Billies.

Marcellus Cooper’s 17 points led three Amherst players in double figures as he helped fuel the rally with 10 third-quarter points, including a half-court three to end the frame that enabled the Tigers to grab the momentum en route to extending their winning streak to nine.

“The kids kept believing, they kept the passion on the bench and they made big play after big play,” winning coach Chris Kensy said. The fans “stood the entire girls game. They stood the entire boys game. This is how every high school game should be.”

In the girls’ game, No. 3 Williamsville South enjoyed the short bus ride home after a hard-fought 57-53 win over fifth-ranked Amherst. Six-foot-4 eighth-grader Amari DeBerry led the way for the Billies with 23 points, 10 rebounds and four assists. South used a 21-15 fourth quarter to take it away from the Tigers, who led 38-36 after 24 minutes.

“It was a very physical game but we pulled through,” DeBerry said.

“I think it was more like a fight,” added Amherst coach Mike Chatelle.

Friday was the second boys-girls doubleheader this season between the ECIC II rivals. Both South teams won three-point nail-biters last month at Daemen College, with the boys needing overtime.

No extra time was needed Friday but both entertaining games still had riveting finishes before a packed house. The Amherst faithful showed some restraint in waiting until after the post-game handshake following the boys triumph to storm the court and celebrate with the players. In that game, the Tigers and Billies both overcame double-digit deficits to take double-digit leads. The fans were happy Amherst did it in crunch time. 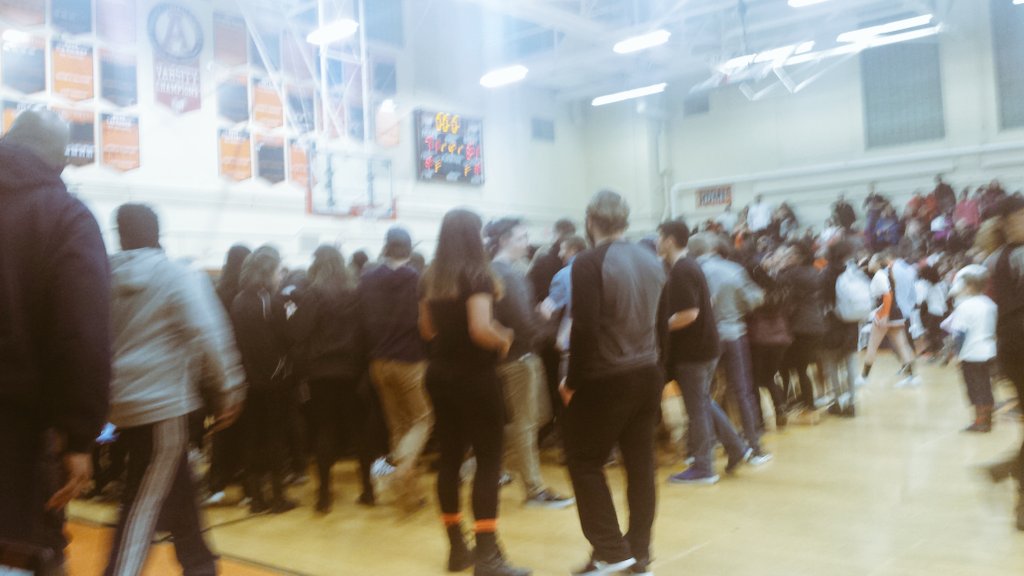 Amherst fans celebrated with members of the boys team on the court after the Tigers' 71-61 win over rival Williamsville South.

The Tigers overcame its deficit with a third-quarter run that included Cooper’s half-court bomb that trimmed South’s lead to 50-49. After a Greg Dolan (21 points) dunk extended the Billies’ lead, Amherst (12-2, 7-1) scored the next seven points to take the lead for good. South pulled within 58-57 after a Cody Sanford free throw with 4 minutes, 49 seconds left.

The Tigers had success inside and continued attacking the basket since that kept putting points on the scoreboard. Jordan Barr and Da’Shawn Hines (16 points) scored on consecutive layups to drive the lead to five. Jake Funderburk’s layup with 49 seconds left made it 67-60.

South, which trailed 18-8 after one quarter, stormed back behind the hot three-point shooting of Mark Worthy. Worthy drained four three-pointers as he scored 12 of his 16 points in the quarter to help South (9-2, 6-1) take a 34-31 lead into halftime. Dolan had five in the period and a coast-to-coast layup late after grabbing a rebound on defense.

Amherst proved to be the better team Friday.

“They were tougher inside,” South coach Gabe Michael said. “You can’t give a team that many points inside and expect to win the game.”

The girls game was a physical battle in which several players hit the floor hard – even though some are AAU teammates during the offseason.

Even DeBerry hit the deck, but she bounced back up and proved to be the constant on offense South needed until it found its rhythm in the fourth quarter.

DeBerry scored six points to help the Billies (9-3, 7-0) surge ahead in a contest in which neither team led by more than two possessions until South went ahead by eight on two occasions. The last came after the second of back-to-back three-pointers in a 25-second stretch by freshman Hannah Dolan that gave the Billies a 53-45 lead with 3:43 left. Junior guard Lauren Lassiter (12 points, seven assists) got hot from outside in the quarter too, hitting a pair of threes.

DeBerry scored perhaps the biggest basket with 59 seconds left. It came off of South’s bread-and-butter play Friday as she caught a pass in the paint from Lassiter and hit the close, turnaround jumper over a shorter defender to make it 55-51.

“Our weapon today was Amari,” Billies coach Kristen Dolan said. “They had a tough time matching up with her. … She’s extremely gifted for her age.”

“My size does help. It usually is a mismatch but I can’t make those shots without everyone one else making those plays up top,” DeBerry said. “It’s a team effort.”

Emma Klein scored four of her five points in the fourth quarter for the Tigers (8-3, 7-2 in ECIC II). Leah Shutts’ long two-pointer pulled the hosts within 53-51 with 2:41 left. Amherst missed a glorious chance to tie as it missed a pair of free throws after a defensive stop with 75 seconds left.

“We had a couple rim out. They had a couple bank in,” Chatelle said. “That’s the way it goes. … It was entertaining.”