Tim Raines and Jeff Bagwell got in comfortably after some long waits, with Raines getting the call in his final year of eligibility. Pudge Rodriguez sailed in on the first ballot. Trevor Hoffman and Vladimir Guerrero just missed.

Those were the immediate takeaways from the 2017 Baseball Hall of Fame balloting announced Wednesday by the Baseball Writers Association of America. It was my first year as one of the 442 voters and I now get to struggle with the same issues that have long dogged Hall voting: Dealing with PED allegations, utilizing the Hall's "character" clause and the limitation of voting for only 10 players.

In case you missed it when published late last month, here was my story on filling out the ballot. What were some of my takeaways from the results? Here's some random thoughts:

The voting body is getting softer on PED users: Eliminating a whole era of the game is not likely going to happen. Bagwell and Rodriguez have unproven steroid allegations against them before testing starting (with Rodriguez famously saying "only God knows" when asked once if Jose Canseco's allegations he injected him were true). But my own feeling seemingly mirrored that of others: How do you respond with your ballot to unproven/circumstantial allegations? You can't. It's the same reason Barry Bonds and Roger Clemens made a big jump this year.

Rules changes might really impact voting next year: The BBWAA voted at the Winter Meetings to publish all ballots for Hall voters starting next year. They will be released seven days after the inductees are announced, a decision requested by the Hall so the story focused on induction night on the winners and not who did or didn't vote for whom.

Ryan Thibodaux's invaluable ballot tracker cranked out this nugget Wednesday night: People who vote in anonymity are far more likely to say no to suspected PED users. Will that change now that they no longer can stay silent?

Biggest drop: Curt Schilling (7.3 percent to 45.0). I would guess endorsing the lynching of journalists on Twitter didn't do much for his cause.

Biggest disappointment: I will continue to vote for Larry Walker (21.9 percent) and Fred McGriff (21.7 percent) but it seems like they're doomed to ever get near 75 percent. And that's a shame. 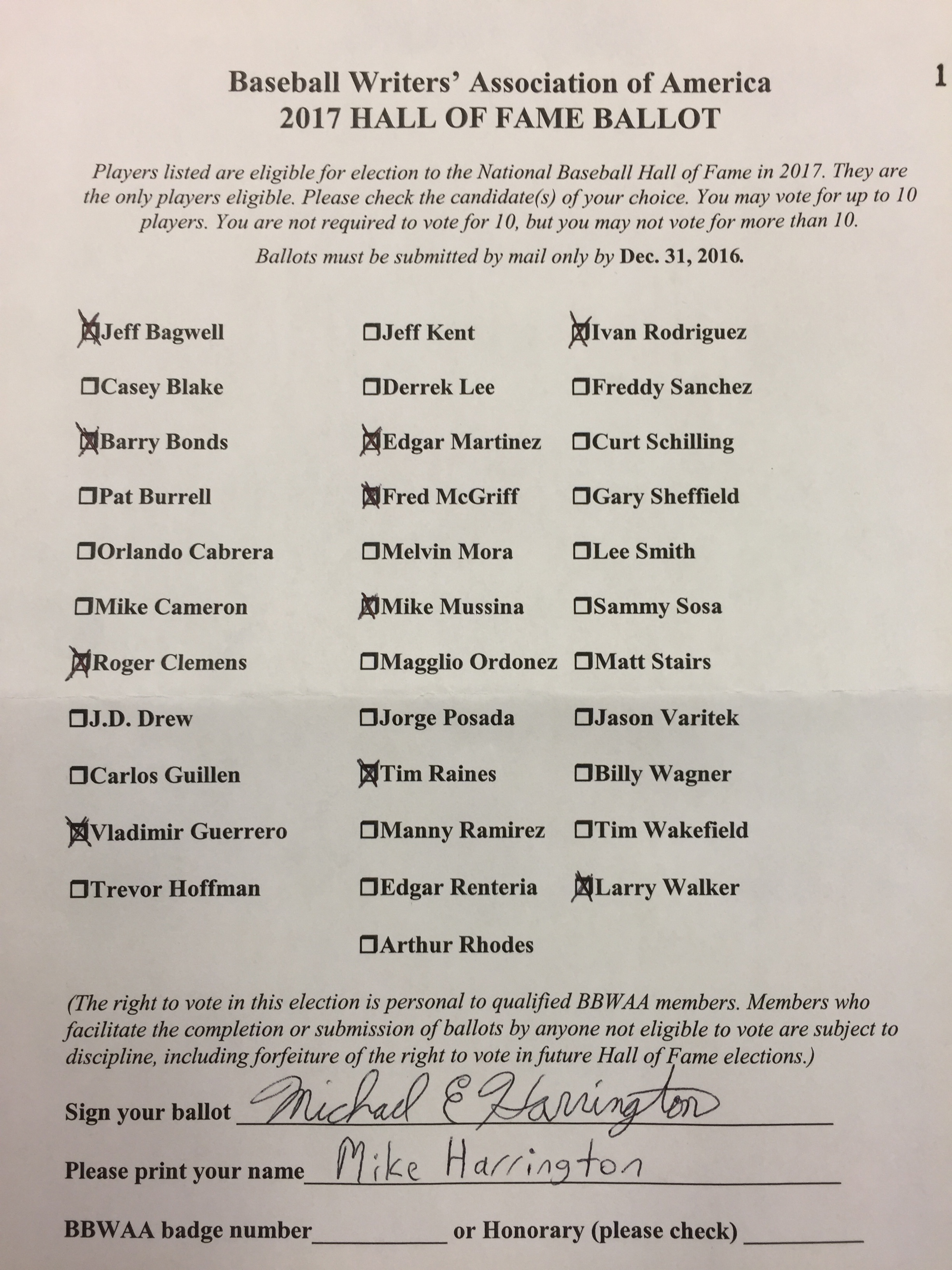 Make or break: Edgar Martinez is now at 58.6 percent with two years left. Will he get that final-years push from voters that Raines did? The Mariners PR department sends voters a huge pack on Martinez every year, something I have not seen from other teams. Is there simply going to be too much anti-DH bias to get him in?

Biggest questions about '18 class: Vizquel, Moyer and Damon are likely to linger for several years but the arguments will be about whether they were truly Hall-worthy or if they were simply what Baseball Prospectus dubs "compilers" -- guys who put up big numbers because their careers lasted a long time. I know Damon was disappointed he didn't last long enough to get 3,000 hits (he finished at 2,769) because that probably would have made him an automatic given his postseason resume.