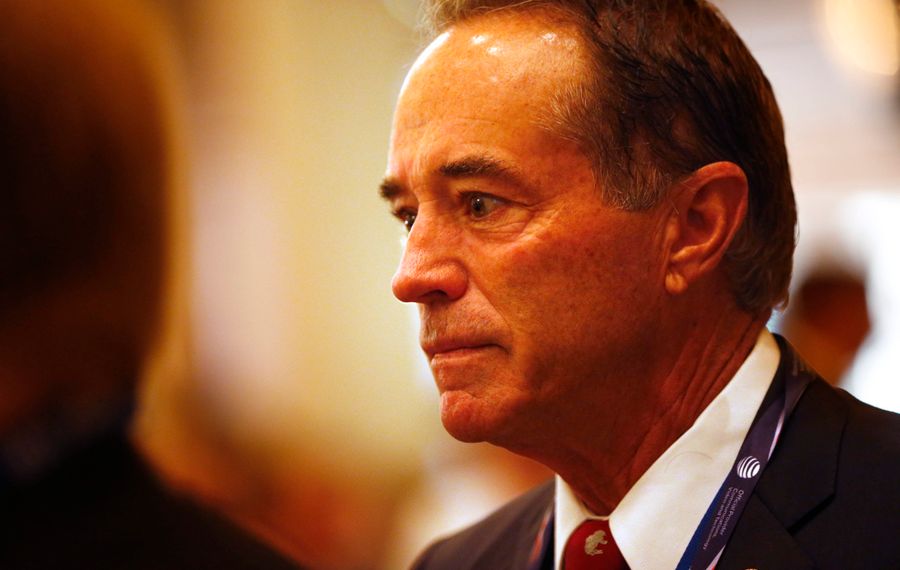 WASHINGTON – When reporters overheard Rep. Chris Collins bragging last week about “how many millionaires I've made in Buffalo the past few months," he appears to have been talking about letting friends and business colleagues know about a company he knows well.

The largest shareholder in an obscure Australian biotech company called Innate Immunotherapeutics as well as a longtime local businessman, Collins, R-Clarence, has been part of Buffalo’s business elite for decades.

Many of the investors – who have seen their investment quadruple in value – have longtime ties to Collins. In fact, according to research confirmed by The Buffalo News, people who bought stock in the two private placements have contributed nearly $105,000 to Collins’ political committees over the years.

One of the people who invested said Collins told him about Innate during a break in a meeting last summer on Capitol Hill.

“It’s shocking The Buffalo News would so obviously play to the playbook of national Democrats and attempt to insinuate nefarious activity occurred,” McAdams said.

McAdams said the vast majority of the people who took part in Innate’s private offerings last summer have been longtime investors in the company, dating back to before Collins was elected to Congress in 2012. The company offered the private placements – stock sold directly to private investors rather than through a public offering – to raise funds for clinical research, according to company filings.

Collins’ involvement in the Australian biomedical firm hit the headlines this week because one of the people he told about Innate is Rep. Tom Price, a Georgia Republican who is President-elect Donald J. Trump’s nominee to serve as Health and Human Services secretary.

Price and Collins invested in the firm at a time when Congress was working on a bill that could boost Innate's prospects: the 21st Century Cures Act, which includes provisions pushed by Collins that speed clinical trials for new drugs, such as those Innate develops.

Price is the only current member of Congress other than Collins to invest in the company’s private stock offerings, according to a proxy statement filed on the company’s website.

At least eight of Innate’s top 20 investors are from Buffalo or have a relationship with Collins, said Robert Galbraith, senior researcher at the Public Accountability Initiative, a Buffalo think tank that first reported the names of the investors and the campaign contributions. Collins is the firm’s largest shareholder, owning 17.06 percent of the company. His son, Cameron, and daughter, Caitlin, tie for fourth.

Many of the people who invested in Innate's private stock offerings had invested with Collins in other deals, Galbraith's research showed – a common business practice. Collins’ public financial disclosure form shows that he has an investment of between $5 million and $25 million in Volland Electric. Volland's president, Christopher Graham, took part in Innate’s first private stock offering last year. Similarly, Collins owns a stake in Bloch Industries of Rochester. Bloch executive Brian Geary joined the first of Innate’s private stock offerings.

The second private stock offering pegged Innate shares at 26 cents a share. The stock’s value has risen since then to $1.17 a share at the close of trading Thursday.

McAdams, Collins’ spokesman, said the conversations Collins had regarding the stock were routine. Noting that Collins has been involved with Innate for more than 15 years, McAdams said Collins has had thousands of conversations with people about secondary progressive multiple sclerosis – the disease that Innate aims to treat through its experimental therapy.

“Along the way, he has spoken with hundreds of people about the work Innate is doing and its life saving potential,” McAdams said. “As I have said before, Congressman Collins has never disclosed any nonpublic or improper information related to Innate Immunotherapeutics.”

Innate investors who contributed to Collins include:

Calls to several of the people who invested in the Innate private placements weren't returned.

Dr. Mark J. Lema, chair of the Department of Anesthesiology at Roswell Park and a past president of the Medical Society of Erie County, said he heard about Innate during a meeting that Collins hosted on Capitol Hill for visitors from Buffalo. He said he overheard Collins discussing Innate during a break in the meeting.

“I said: ‘Can I invest in this?’ ” and Collins replied by mentioning the private stock placement, Lema said.

“There was no hard sell whatsoever,” said Lema, who took part in the second private placement. “He did not come to me to talk about this. It was just a conversation.”

Craig Holman, government affairs lobbyist for Public Citizen, a left-leaning advocacy group, said the stock transactions could create the appearance that Collins was rewarding campaign contributors with a hot stock tip – or worse, selling access to a stock tip in exchange for campaign contributions.

Collins’ spokesman said the congressman had done nothing wrong.

“I will reiterate again, Congressman Collins has followed all legal and ethical requirements of the House of Representatives and will continue to do so,” McAdams said.