Timothy Wisniewski’s cottage on Ellicott Creek was a party house for Wisniewski’s nearly grown children and their friends.

No matter what their age, they could drink, smoke pot and even live there sometimes, according to testimony at Wisniewski’s trial in November.

That acceptance of illegal behavior at 121 Young Street in the city of Tonawanda helped convict Wisniewski, 51, of criminally negligent homicide in the death of one of his teenage guests and helped persuade Erie County Judge Sheila A. DiTullio to give him the maximum allowable sentence Thursday of up to four years in jail.

A jury found Wisniewski guilty of the criminal negligence for allowing Gregory G. Green, then 17, to drink at his house and then, with Wisniewski and Green’s girlfriend Avery Gardner as passengers, to drive the older man’s small powerboat at high speed on Ellicott Creek early in the morning of June 11, 2015.

Gardner, 16, stood up in the back of the boat and struck her head on a steel pedestrian bridge when Green sped under it. She sustained massive head injuries and died that day.

Eight months later, Green and Wisniewski were arrested and charged with felonies for her death.

Erie County District Attorney John J. Flynn Jr. praised the work of Tonawanda police and other investigators in building the case, noting that criminal negligence can be difficult to prove.

“They put together a pattern of behavior that the jury could comprehend,” Flynn said.

He said that behavior by Wisniewski included providing a place for young people to drink, buying them alcohol and allowing a drunken 17-year-old to drive a boat recklessly on a small waterway where he knew it was dangerous.

Last week DiTullio sentenced Green to six months in jail and five years on probation for his guilty plea to vehicular homicide and criminally negligent homicide.

On Thursday she placed the bulk of the responsibility for Gardner’s death on the only adult involved -- Wisniewski.

“Mr. Wisniewski, you should know better. This tragedy did not have to happen,” DiTullio told him. She called Wisniewski’s interactions with the teenagers “reckless, inattentive and careless.” 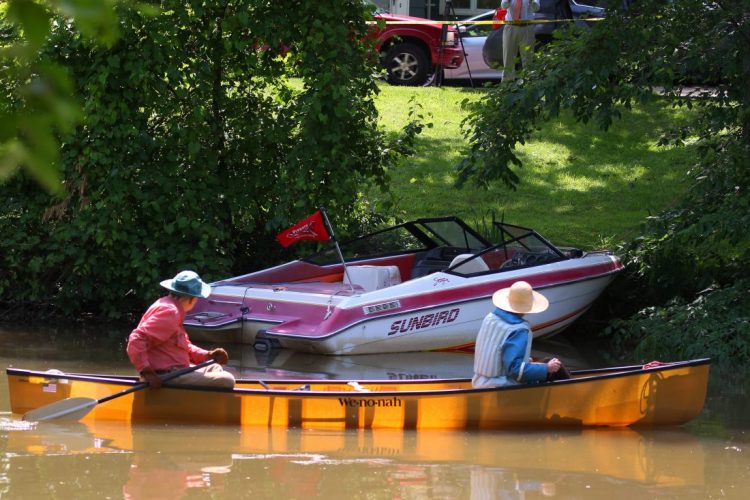 She also addressed a statement Wisniewski made during a interview, wondering how he could be found guilty when he wasn’t piloting the boat.

The judge also took into account Wisniewski’s long criminal history, stretching 35 years with at least 20 convictions for driving while intoxicated, drug possession, harassment, disorderly conduct, attempting to receive stolen property and a felony conviction for robbery and attempted robbery in 2005 in connection with holdups and a convenience store and gas station.

And, like Green, Wisniewski had said he started drinking when he was 14 years old and since then had been a regular user of marijuana, cocaine and heroin.

The pattern, as Flynn described it, continued with Wisniewski’s own family. His son, also named Timothy, was Green’s friend and, according to Green’s testimony, the two also had a business relationship, selling pot.

It was the younger Tim that Green and Gardner were drinking with through the night before they got in the boat at around dawn on June 11, 2015.

Wisniewski’s attorney Anthony Lana focused on that before the sentence was pronounced in an effort to offset his client’s culpability.

He argued that Green, who was two months away from his 18th birthday when the crash occurred, was no child.

“This was an individual who at the young age of 14 was allowed to smoke, grow and sell marijuana out of his mother’s house,” Lana said. “Mr. Green showed up (on June 10) with his own alcohol. He’s the one who convinced Mr. Wisniewski to go out on the boat with the lure of buying him a tank of gas.”

He also said that Wisniewski told police how “he cried his eyes out” the next day over the girl he knew as “Ava,” while Green showed no remorse and was dating Avery’s best friend within a month of Avery’s death.

The judge said Wisniewski, who lived along Ellicott Creek almost all his life, should have realized the dangers.

In addition to the indeterminate term of two to four years for his conviction of criminally negligent homicide, DiTullio sentenced Wisniewski to one year for acting in a manner injurious to a child, one year for driving while intoxicated and 15 days for marijuana possession. All the sentences will be served concurrently and include the eight-plus months that Wisniewski already has spent in custody since last May.

The sentencing ends the criminal case, but a civil case over Gardner's death is just getting underway.

Xavier M. Gardner, Avery’s older brother and administrator of her estate, has filed a lawsuit on her behalf against Green, Wisniewski, the Town of Tonawanda and Erie County.

The suit accuses Wisniewski of providing alcohol to minors, including Green, and charges that both parties were under the influence of drugs and alcohol at the time of the incident.

Wisniewski is accused of not properly supervising the teens in the boat and of not warning Gardner about the bridge. Green is accused of driving recklessly and without having proper instruction.

Although testimony by investigators in Wisniewski’s trial indicated otherwise, the lawsuit also states that Ellicott Creek had an “extremely high water level” on June 11, 2015.

The county and Tonawanda figure in the lawsuit for their alleged failures in designing and building the bridge, and for not warning boaters or restricting boating on the creek.

In answers to the suit, the town and county each deny the allegations and, unlike in the criminal case, both put some, if not all, of the blame for her death on Avery Gardner herself.

They also name Green and Wisniewski as the only other responsible parties for the death.

Green and Wisniewski have not filed answers to the suit and it’s not clear if Wisniewski has even seen it. Papers filed in the case indicated that notice of the lawsuit was attached to the door of his Young Street home, where he has not lived since May.