New York’s state fish is the colorful brook trout. These fish has been around since the glaciers receded thousands of years ago, a native fish that is not a trout at all. It’s actually a char, like another native fish – the lake trout.

Anglers also like to call brook trout “brookies” or “speckled trout.” When many fishermen think of brook trout, they think of secluded Adirondack ponds, lakes and streams … and they would be right. However, what would your response be to the fact that there are 334 brook trout streams in Western New York’s Region 9 alone – taking in Allegany, Cattaraugus, Chautauqua, Erie, Wyoming and Niagara counties.

“A majority of the brook trout streams are located in the Allegheny and Genesee watersheds,” says Tom Hoffman, fisheries biologist with the Lower Great Lakes Fish and Wildlife Conservation Offices of the U.S. Fish and Wildlife Service (located at the Iroquois National Wildlife Refuge in Alabama/Basom). “While that might seem like a large number of brook trout waters here, there is a fairly limited number of adults which certainly restricts expanding those populations.”

Wild brown and rainbow trout have not been faring as well.

Catches of the Week

Brook trout are magical. Catching one gives an angler a sense of accomplishment. It is our water version of a “canary in a coal mine.” These fish are very sensitive to the local environment and if something is off, they will tell us through a lack of survival.

“It may be fortunate or unfortunate that many of the brook trout are found in the smaller streams,” says Hoffman. “By being in the smaller waterways, they will often be overlooked by the average fisherman.” 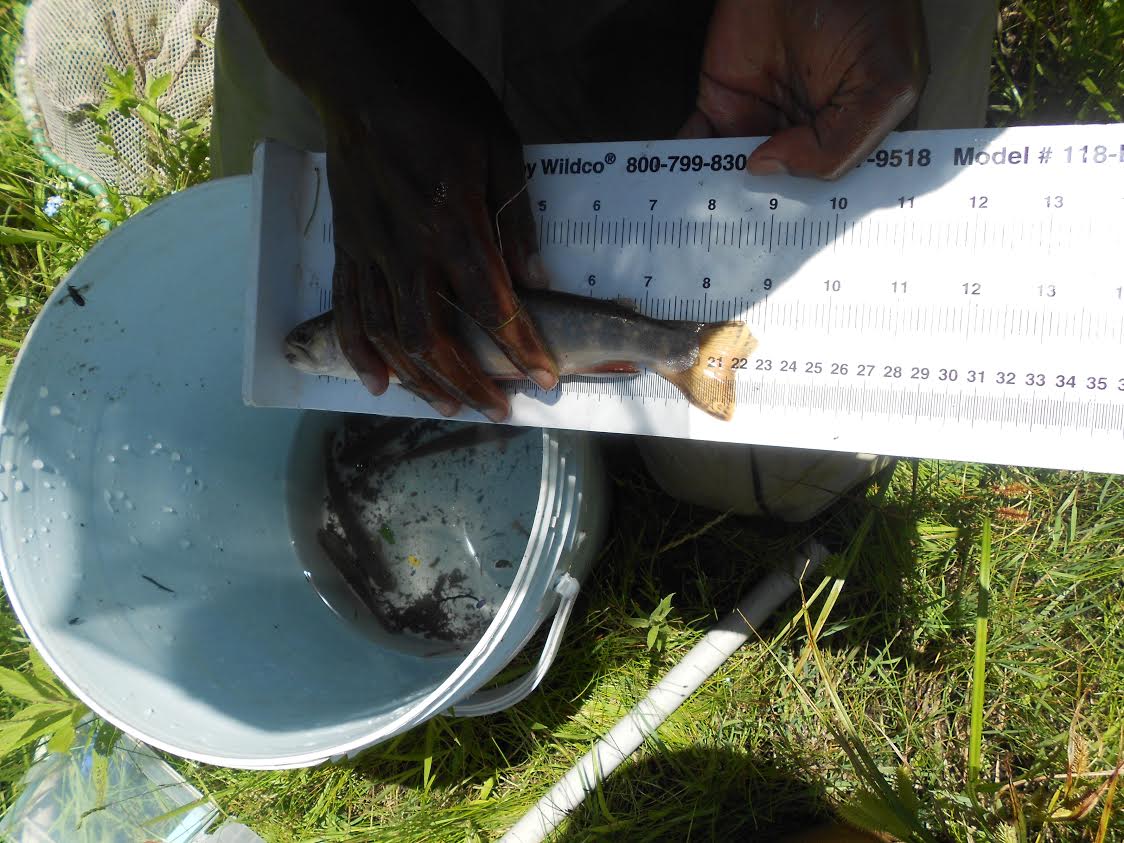 Skipping lunch one day, he opted to try a small stream near the resort. He was rewarded with two brook trout over 11 inches long – nice fish in anyone’s book and stellar for Western New York. Kelly, a guy who lives for trout fishing, was impressed. We are blessed with some decent brook trout populations. Like the wise old man once said, though – fish are where you find them! You will have to do some exploring … but that’s not a bad thing.

Work has been underway to try and figure these fish out. Not just in Western New York, but throughout the Northeast. The Eastern Brook Trout Joint Venture is a dedicated group of fisheries agencies (state and federal) that works in concert with other groups to develop a population assessment of brook trout, identify threats to wild fish and the habitats associated with these fish and develop fisheries management strategies to protect, enhance and restore these state fish throughout the range of the eastern brookies.

“We hope to answer many questions as they relate to brook trout, such as getting an idea of what genetic variations we have within our Western New York populations,” reflects Hoffman. “We need to know what we have to work with. I have been working closely with Scott Cornett with DEC to make some of these determinations. We would like to know how hatchery brook trout influence the local populations genetically. Some genetics work is going on right now at the Randolph Hatchery with the help of the U.S. Fish and Wildlife. We hope it’s a heritage strain that’s free from outside influences.

“Another big part of our research is to evaluate any potential dispersal areas, such as problems with culverts in many of the streams. We will look to see if any populations have become isolated due to problematic culverts. If the barrier is above the problem, we will do our best to solve the issue and let the fish disperse through the system naturally. We worked closely with Buffalo Niagara Riverkeeper, too, surveying the culverts, assessing the situation and correcting the problem if necessary. 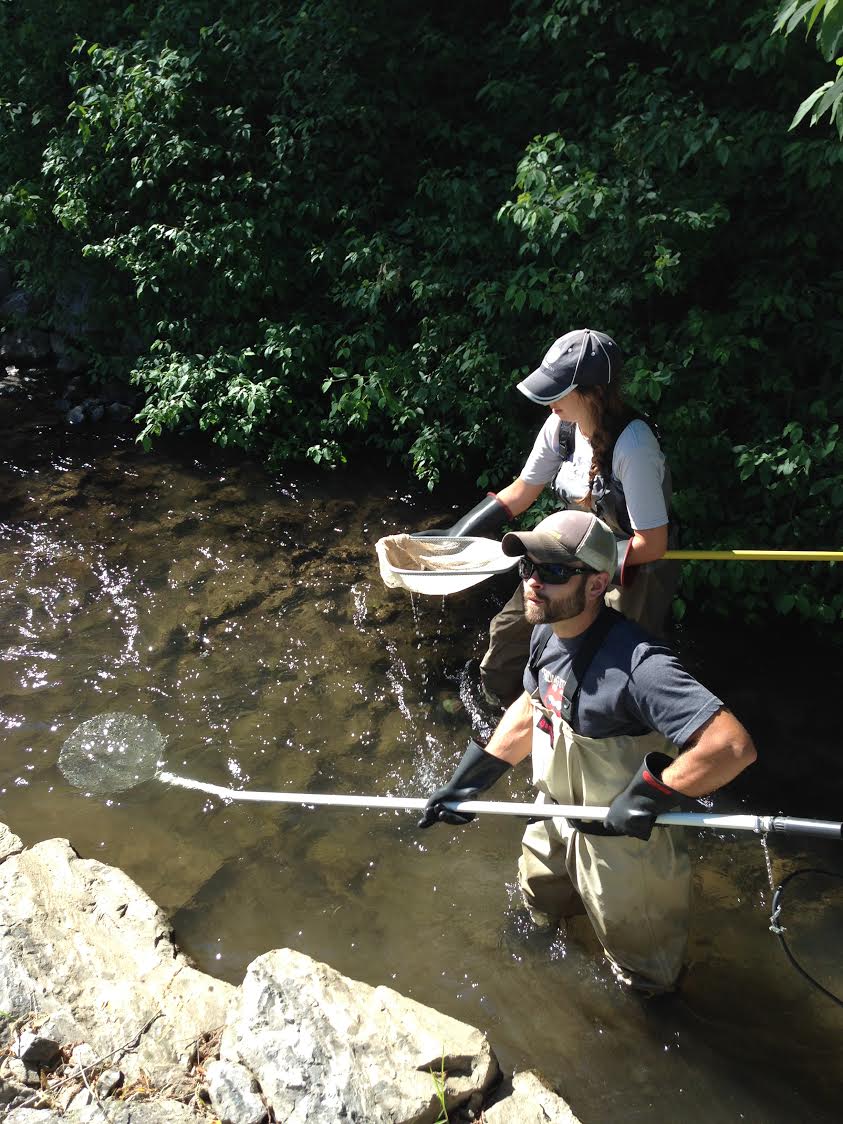 “In some situations we were surprised at the amount of quality habitat we found. This is encouraging because this could help us with the big picture of natural reproduction.”

A good model of restoration work has been the Canadaway Creek Conservation Project, tied in with the Children of the Stream led by Alberto Rey of Fredonia. They have been stocking brook trout on their own for a number of years.

Correcting a culvert problem is important, but they also need to maintain the sediment transport capacity in the stream. The flow needs to flush through the gravel, helping them to improve the quality of the habitat even more. And they are also looking at reducing bank erosion downstream.

Grant money has been coming from a variety of sources. According to a recent DEC report for Region 9, 2016 saw fisheries personnel evaluate 638 different road/stream crossings. Over 100 of those were considered severe barriers; 40 (six percent) were considered significant and 110 were tagged as moderate (possibly due to seasonality). Many of the problem areas will be worked on in 2017 and 2018.

“We are trying to help Mother Nature along and bring brook trout populations back as best we can,”  Hoffman said.