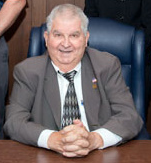 Rizzo, 83, is the 1st Ward alderman and former Council president.

In a public statement, Rizzo said, "As many of you know, I have had my fair share of challenges this year, but was recently given a clean bill of health by my doctor. While I have loved working to make NT a stronger community, this gave me the opportunity to reflect, and I came to the realization that I had accomplished all the goals I set when I first decided to run for office.

"That realization, and a belief that our city would be well served by bringing in some fresh ideas, is why I have decided to make Feb. 2 my last day in office. I wish Mayor (Arthur G.) Pappas and my colleagues on the Council success in all things, and I leave with nothing but love for this great city and her people."

Since 2000, Rizzo has been elected to seven terms as 1st Ward alderman and one term as a Niagara County legislator, as an independent with Republican backing.

"Russ was very often Mr. North Tonawanda," said Michael P. Carney, chairman of the city Republican Committee. "Russ has earned some time off for himself and his family. He made our community a better place to live; now he deserved to go out and enjoy that fact."

Rizzo's term was to expire at the end of this year. His departure leaves two vacancies on the five-member Council. Alderwoman at Large Catherine G. Schwandt is resigning as of Feb. 1 to take a job with the New York Power Authority, and the Council is expected to interview applicants for her seat Jan. 31, with a choice to be made Feb. 7.