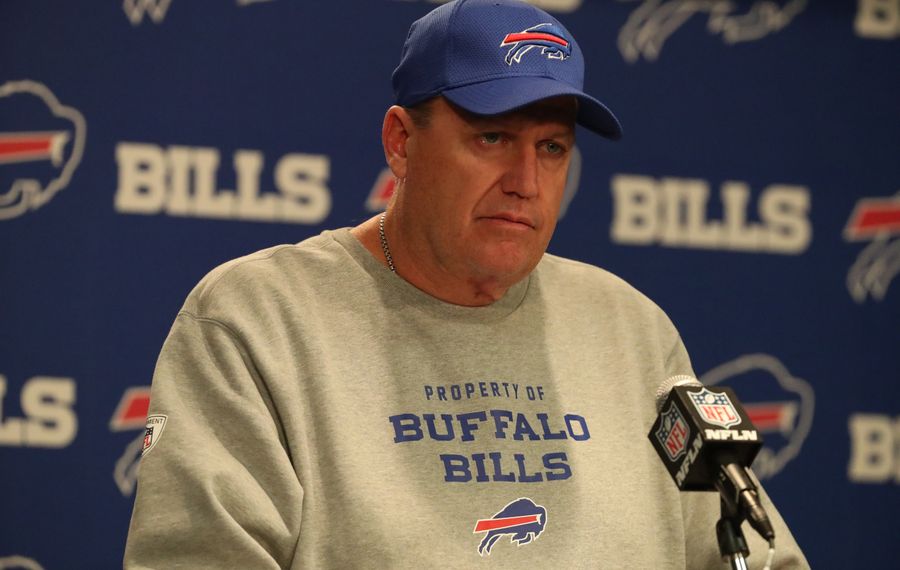 I dropped in at Coles for a quick one after work Tuesday night and ran into my old pal, Rex Carr, who was sitting at the bar and cursing at the TV as the Sabres were in the process of losing at the Maple Leafs.

"Nice goaltending," Rex muttered, keeping his gaze fixed on the TV set as I ordered a couple of drafts. "As if things weren't going bad enough, Mr. Positive has to stop by to brighten my day."

"Hello to you, too, Rex," I replied. "Yeah, it's looking grim for the swords. This point-a-game pace is getting old. They basically have to win two-thirds of the rest of their games to have a chance at the playoffs."

"Fat chance," he said. "I can't believe I bought season tickets when they drafted Eichel. The kid is phenomenal, but he's only one guy. When are you goofs in the media going to stop giving Tim Murray a free ride, by the way?"

"Maybe they should bring back Quinn and Regier."

"Keep it up and we'll have to step outside," Rex snarled.

"Hey, we've been pretty tough on Murray. He traded away most of his organizational depth. He got his lunch eaten on the Evander Kane deal. Robin Lehner hasn't come close to justifying a first-round pick. Do you even read the paper?"

"I don't need to read the paper to know these two pro franchises are wearing me out," he said. "This spring, it'll be 10 years since the Sabres won a Cup series. I've waited over 20 for a Bills playoff win."

"So what do you think of the Bills' new coach?"

"What am I supposed to say?" Rex said, rolling his eyes. "That I like McDermott because he's not Rex Ryan? Because he's not promising us the moon and he's organized? That's the new standard for coaches in this town, a guy who actually works hard and can count to 11?"

"Boy, I remember how excited you were about Ryan. You said it was an omen that you shared the same first name. You called him a Buffalo guy and went looking for him at the Big Tree to autograph your Sports Illustrated."

"So I got fooled," Rex said. "I wasn't alone. I remember some sappy columns from you that helped get the fans all worked up about the guy."

"Hey, did you hear about the framed cover of Sports Illustrated on the wall at the Tree, the one with Rex, Kelly and Thurman? They blackened out the "R" in 'Rex Effect'. Now it just reads 'Ex Effect'."

"It's not so funny if you've been suffering with that football team for the last 17 years," Rex said. "I really believed in Rex. Never again."

"Yeah, and how many times does this make it that you've sworn never to let your heart get broken by these teams again? It has to be double figures."

"You've done your share of over-reacting too, multi-media star," Rex said. "Well, no more. I still care, but I'm keeping my expectations low. I guess you could call me ... indifferent."

"I've been hearing a lot of that from fans lately," I said. "People are mentally exhausted. They're not willing to invest emotionally in the Bills anymore. One diehard told me his 11-year-old son asked if he could have another team to root for. Yep, they killed us and now they're coming for the children."

"Well, maybe they'll get it right this time," Rex said. "But I need to be convinced. People say they're bound to get lucky, but it's not about luck or curses, it's about bad management."

"Amen to that. I learned that growing up a Red Sox fan."

"The Pegulas have done a lot for the city," Rex added, gesturing toward downtown Buffalo with his beer mug, "but they're spread too thin running two sports franchises. How can they keep Whaley? Didn't they learn their lesson with Darcy? What does Kim do, anyway?"

"At least they're giving more say over personnel to the new guy. McDermott is more or less the czar they've been looking for. But come on, is that what you want for your czar, a guy who's never been a head coach or front-office guy?" 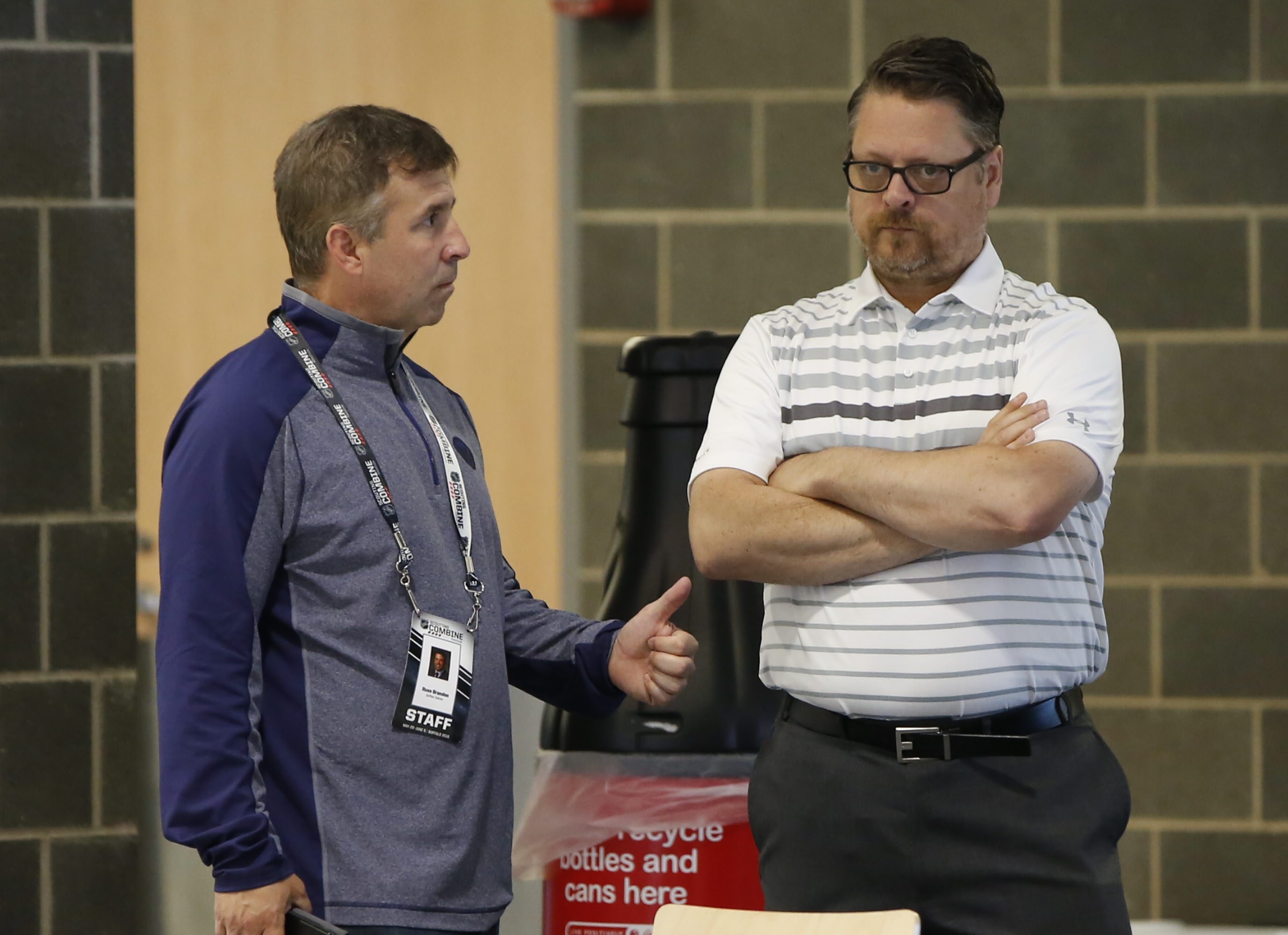 "What happened to Brandon, by the way?" Rex said. "You know how they say if you have two starting quarterbacks, you really have none? Well, it seems to me that if Brandon is president of both our teams, he's running neither."

"He's still the marketing genius," I said, "as long as people keep buying tickets for losing teams. I remember when Rex came in and they sold the most seasons ever. You said the Pegulas had changed everyone's attitude, that it wasn't all about winning anymore."

"Did you hear the Chargers are moving to LA?"

"Yeah," he said, "and with Anthony Lynn as coach."

"That's two teams that moved to Los Angeles, and if the Raiders go to Vegas, that'll be three franchises relocating since Ralph died. And ... "

"And the Bills stayed put," Rex said. "Man, I remember how scared we were that the team would wind up in LA, especially when they said two teams might end up there."

"I've been tougher than anyone on the Pegulas," I said, "but you never know what might have happened to the Bills if they hadn't shown up. So with all this franchise movement, fans can feel a renewed gratitude."

"I know I do," Rex said. "I'm just tired of settling. I miss the days when we expected them to win. Maybe this time it will be different. You never know in the NFL. Let's say Whaley has a good draft for once."

"Maybe Ragland and Lawson come on like gangbusters in a new defensive scheme. They keep Tyrod and the light goes on. Watkins and McCoy stay healthy, and they find a good kicker and a second receiver and a safety and a ... "