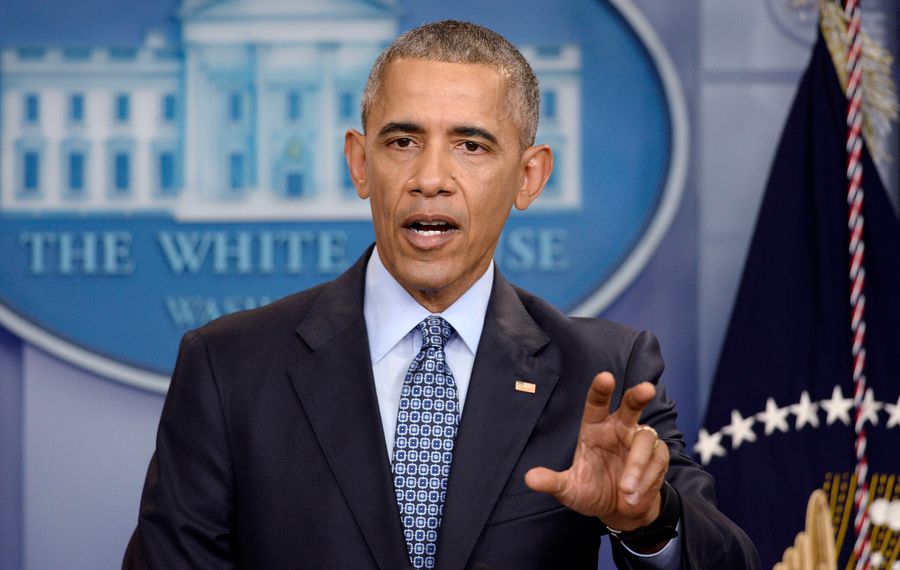 WASHINGTON — President Obama made clear on Wednesday that he would not go silent after leaving office this week, promising to speak out whenever he feels America’s “core values” are threatened.

While he said he was looking forward to taking a break from politics, Mr. Obama said at the final news conference of his presidency that certain major issues would be important enough to draw him out of retirement and back into the national conversation after President-elect Donald J. Trump takes over on Friday.

In highlighting instances when he would feel compelled to engage in public debate in the future, Obama signaled that he intended to follow a different course than his predecessor, George W. Bush, who largely withdrew from public life eight years ago, saying his successor deserved his silence.

Obama has expressed respect and appreciation for Bush’s approach, but he has told friends that he did not intend to remain a mute bystander to the dismantling of important democratic ideals that he championed for eight years.

Obama used his final meeting with reporters in the White House briefing room to defend his decision a day earlier to commute the prison sentence of Chelsea Manning, the former Army intelligence analyst convicted of leaking American military and diplomatic secrets in 2010.

Dismissing concerns that he was sending the wrong message to others who then might divulge classified information, Obama pointed out that Ms. Manning had already served seven years in prison.

He added: “I feel very comfortable that justice has been served.”

Obama leaves with rising approval ratings but an eight-year legacy that is already under attack even before Mr. Trump is inaugurated. He declined to comment on the decision of dozens of congressional Democrats to boycott Mr. Trump’s inauguration. “All I know is I’m going to be there,” he said. “So’s Michelle.”

Obama’s final news conference — his 165th, according to the American Presidency Project — gave reporters one last chance to ask the president about the news of the day. He spoke out on Russia, Middle East peace, gay rights, race relations and other major issues one final time.

The president used his final appearance as president before reporters to implicitly urge Trump not to impose harsh new restrictions on the press. Mr. Trump has had a volatile relationship with reporters for years, and his aides suggested recently that they might move the news media out of the White House briefing room, but have since backed away from the idea for now.

Although he did not mention that directly, Obama said the presence of reporters inside the West Wing was important for democracy. “Having you in this building has made this place work better,” he told the reporters. “It keeps us honest.”

Obama has frequently clashed with news organizations, and he was aggressive in prosecuting leaks of government information. He also regularly sought to communicate with the public by going around the traditional news media, using social media tools and sitting down for interviews with the hosts of online-only programs.

But his administration also pushed for press freedoms in countries around the world and pushed for access on behalf of American reporters during presidential trips to countries like Russia, China and Cuba.

The news conference was held in the White House briefing room, not in a more formal setting like the East Room, where the president’s first presidential news conference took place in February 2009.

Many of the president’s remaining White House staff members were sitting on the sidelines during the news conference, taking a break from cleaning out their desks. All but one or two are scheduled to walk out of the West Wing on Thursday afternoon to give movers time to set up offices for Trump’s staff.

Obama signaled that he was ready for some time away from the spotlight. “I want to do some writing,” he said. “I want to be quiet a little bit and not hear myself talk so darn much. I want to spend precious time with my girls. So those are my priorities this year.”

Once the news conference is over, Obama planned to walk off the stage, permanently. His public schedule for Thursday reflected the lack of any more appearances: “On Thursday, the President will attend meetings at the White House.”

By Friday at noon, that White House — and the lectern with the presidential seal — will be Trump’s.