Some Depew voters aren't satisfied with just saving their village from being eliminated. Now they want Depew to become a town.

Less than five minutes after elections officials announced Tuesday night that Depew residents had rejected a referendum to eliminate the village government, some voters in the crowd at Village Hall began urging that Depew flex its muscles again and jump into an even bigger battle.

"I think our next battle is with the towns over the overtaxation," Fire Chief Scott Wegst told The Buffalo News seconds after the vote result was announced. "Depew might possibly become a town...rather than still be a village. It could have town boundaries, but no double taxes."

Others in the crowd echoed Wegst's comments, and it seemed like more than idle chatter at Village Hall during the wild post-referendum euphoria after it was announced that Depew residents voted 3,006 to 1,165 to keep their 124-year-old village government intact. 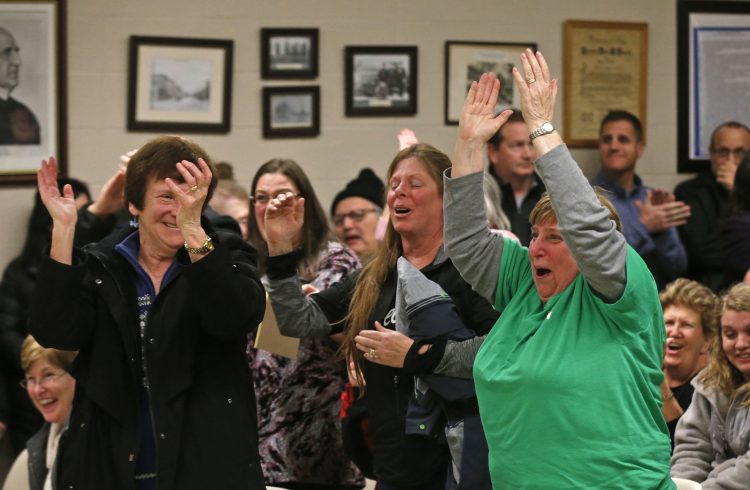 In fact, the idea that Depew should become a town first emerged publicly at a Village Board meeting a week before Tuesday's vote.

Village resident Mary Curr, a nurse married to a Depew police officer, told the Village Board then, "Once the vote is 'No,' we will demand our money back from Cheektowaga and Lancaster, and we will become a town."

So can a village become a town?

There are five coterminous town-villages in New York - Mount Kisco, Harrison and Scarsdale, in Westchester County, Green Island in Albany County, and East Rochester in Monroe County. But it's not an easy feat.

"New towns are not created very easily, however, because they must be carved out of existing towns, taking those towns’ tax base with them," said Wade Beltramo, general counsel for the New York Conference of Mayors. "Consequently, there is very little change in town boundaries in New York, most of which haven’t changed since the mid-1800s."

Related: A gallery of photos of Depew village vote.

A town-village can be created in several ways. One way would be for an existing village like Depew to annex all of the adjacent territory in its town lying outside the village to expand its boundaries so that they are the same as the town. For this to occur, there would have to be no other villages already in existence in the town. Or, the State Legislature also could adopt a special act creating the coterminous town-village. Since it would be for the benefit of only two municipalities, such a special act would require that the two existing governments send a "home rule request" to the Legislature to enact the bill. There are other methods, as well.

"We're going to try to address their issues about taxation without services," Depew Village Attorney Kathleen McDonald said. "We don't get adequate reimbursement (from the towns). We plow and pave our own roads and pick up leaves. We don't want to pay the towns as much for services they don't provide, so we'll look into whatever steps we can to address that issue."

Irvine G. Reinig II, who spearheaded the grassroots effort to eliminate Depew's village government, said he does not think trying to transform Depew into a town makes much sense and called it "not practical."

"Residents of the village are already residents of a town. You'd have to change the boundaries of a town and the towns would have to agree," he said. "Can a village of 15,000 people with no growth become a town? That doesn't solve any of the problems that Depew has, and the cost involved in doing this has got to be huge. It's not like you say 'Tomorrow, we become a town.'"

Reinig said he did not believe his side would win the referendum vote. He said the village employees, whose jobs would be in jeopardy, had too many relatives and friends. Plus, the village officials had more resources to fight the effort.

Reinig said he thought the vote would be closer than it was.

"We must have been outspent 30 to 1," he said. "There are a lot of tight connections with families. I probably underestimated the power of that. We did what we thought was right for the residents and taxpayers of Depew. I don't regret doing it."

"This was a massive turnout and they did an excellent job of mobilizing and convincing voters they were better to keep their village," said Reinig, 70.

He said he wishes village officials and residents well in figuring out how to resolve Depew's high taxes and lack of growth.