WASHINGTON – Chris Collins put his money down on a small New Zealand biotech firm more than 15 years ago, back when he was just a businessman. He stuck with the company after he became Erie County executive and after he became a member of Congress in 2013.

Then last August, he put even more money down on the company now known as Innate Immunotherapeutics and based in Australia, buying another 4 million shares on Aug. 29. Two days later, Rep. Tom Price of Georgia – a physician who is President-elect Donald J. Trump's nominee for health secretary – bet big on the same company, investing upwards of $100,000.

The stock's price has nearly tripled since then, as Congress, with significant help from Collins, passed legislation that could benefit makers of experimental drugs such as Innate Immunotherapeutics.

And just a week ago, reporters overheard Collins bragging into his cell phone off the House floor.

"Do you know how many millionaires I've made in Buffalo the past few months?" Collins said, according to reporters for Politico and the Washington Post who overheard his comments.

That series of events now spells trouble for both Collins and Price. Government ethics experts and a senior New York Democrat question whether Collins – by far the Australian company's largest shareholder – and Price bought that stock last year based on inside information. Price might have to answer questions about those trades as a Senate committee meets Wednesday to consider his nomination as Health and Human Services secretary.

“Innate Immunotherapeutics is governed by regulations in New Zealand and Australia and has never been in front of U.S. regulators," McAdams said. "Congressman Collins has followed all ethical guidelines related to his personal finances during his time in the House and will continue to do so.”

Price is under fire for a series of stock investments he has made during his tenure as a Republican member of Congress from Georgia, but government ethics experts are increasingly focusing on his Innate Immunotherapeutics investment – and Collins' possible role in making it happen.

"Chris Collins is the company's biggest investor and he's on the board of directors, and he makes a very substantial stock purchase, and then just two days later, his friend and colleague, Price, makes a huge stock purchase himself," said Craig Holman, government affairs lobbyist for Public Citizen. "It just really looks suspicious."

Asked whether Collins told Price he should invest in the company, McAdams said: “Dr. Price will have the opportunity to address his financial holdings during his confirmation hearings.”

Public Citizen, a good-government group, has asked the Securities and Exchange Commission and the Office of Congressional Ethics to investigate the transactions.

"These patterns of extensive trading activity in businesses and industries that Reps. Price and Collins oversee in their official capacity, and the beneficial timing of these trades, raise legitimate questions concerning both potential insider trading and conflicts of interest," Public Citizen said in its letter to the two government agencies. 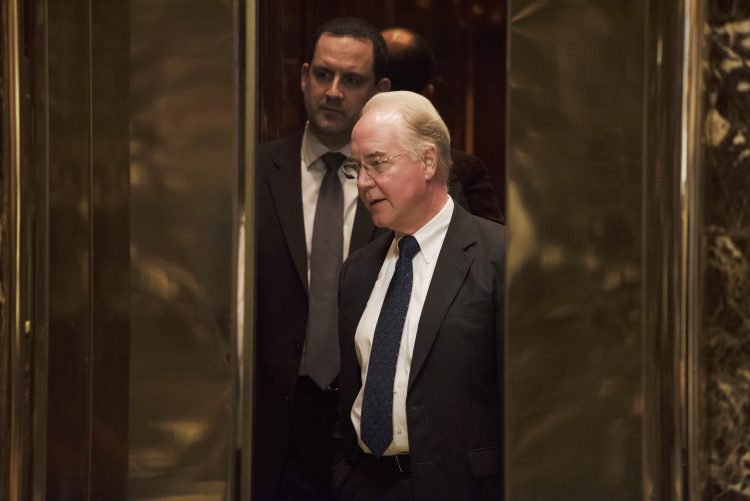 Rep. Tom Price (R-Ga), who has led opposition to the Affordable Care Act, was selected by President-elect Donald J. Trump to be secretary of health and human services, according to a transition team official. (Hilary Swift/The New York Times)

The concerns stem from the fact that Collins has long been Innate Immunotherapeutics' largest shareholder and biggest booster, buying into it back when it was named Virionyx and based in New Zealand.

Collins has stuck by the company even though it has remained experimental in nature. It is currently developing an experimental treatment for multiple sclerosis.

"Secondary Progressive Multiple Sclerosis is one of the most debilitating diseases in the world, and Congressman Collins saw its deadly impact first hand as it affected a close family member," McAdams said. "As of now, it has no cure and no relief of symptoms. He is very proud of the progress the company has made over the years and hopeful it will develop a potentially life-saving treatment for the millions of individuals suffering from Secondary Progressive Multiple Sclerosis.”

The company has not applied for a clinical trail of its MS treatment at the Food and Drug Administration, but it could do so someday. And if it does, it will find the approval process streamlined thanks to the 21st Century Cures Act, legislation that Congress passed late last year.

Collins authored the part of the bill that speeds up clinical trials.

“I am proud to have had a role in crafting this landmark legislation,” Collins said at the time of the bill's passage. “Ensuring medical innovators have the funding and ability to do their jobs is crucial to helping the millions of Americans struggling with incurable diseases. This legislation has the ability to change people’s lives, and I could not be more excited about its passage.”

Asked at the time of the bill's passage about his investment in Innate Immunotherapeutics, Collins told The Buffalo News he informed the House Ethics Committee of his stake in the drug research firm. He maintains that his interest in the drug company actually shows not a conflict of interest, but rather the business knowledge that he's been able to bring to Congress.

Richard Painter, vice chair of Citizens for Responsibility and Ethics in Washington, a good-government group, disagreed.

Noting that the Australian company may seek to sell products in the lucrative American market someday, Painter – former ethics counsel to President George W. Bush – said he is uncomfortable with a member of Congress investing in a company that could benefit from congressional action.

"I think that's a serious conflict of interest," Painter said.

Rep. Louise M. Slaughter – a senior Democrat who represents a Rochester-based district just to the east of Collins' district – asked the SEC to investigate the Collins and Price stock trades.

Price's Innate Immunotherapeutics investment is just one of several that are likely to surface Wednesday as the Senate Health, Education, Labor and Pensions Committee considers his nomination as HHS secretary.

Slaughter, however, focused both on Price and Collins in her letter to the SEC.

She said Collins' and Price's investments – along with their involvement in the passage of the 21st Century Cures Act – raise the possibility of insider trading.

"As well-positioned members of the House, both Congressmen Collins and Price may have had nonpublic information about the prospects for the bill that would be relevant to the pharmaceutical industry," Slaughter wrote.

The author of legislation that bars insider trading among members of Congress, Slaughter noted that Collins' investment last year could have netted him as much as $3 million. In addition, she highlighted the Post and Politico reports that showed Collins bragging last week about "how many millionaires I've made in Buffalo."

Asked if Collins was referring to Innate Immunotherapeutics in those comments just off the House floor last week, McAdams did not offer a direct answer, instead saying: "In the case of Innate Immunotherapeutics, many Western New Yorkers have been invested in the company for more than a decade. As the company has progressed with its drug trial, the market valuation has increased significantly.”