Even Tesla was freezing.

That is one image that sticks with me after the overwhelming experience of seeing Niagara Falls in winter. You know that oversized, Soviet-style statue of Nikola Tesla that sits on Stedman's Bluff, overlooking the American Falls? The great scientist sat hunkered down, the blueprints in his lap covered in snow and ice, and you could swear he was shivering.

Not to sound like your mother, Nikola, but you shouldn't go anywhere near Niagara Falls in winter without the proper attire.

I learned that the hard way.

Blithely, I headed to Niagara Falls straight from the office, clad casually in ankle boots and a short coat. Highs in the high 20s were predicted. To Buffalonians, that's balmy.

[Photos: Look closer at Niagara Falls during the winter] 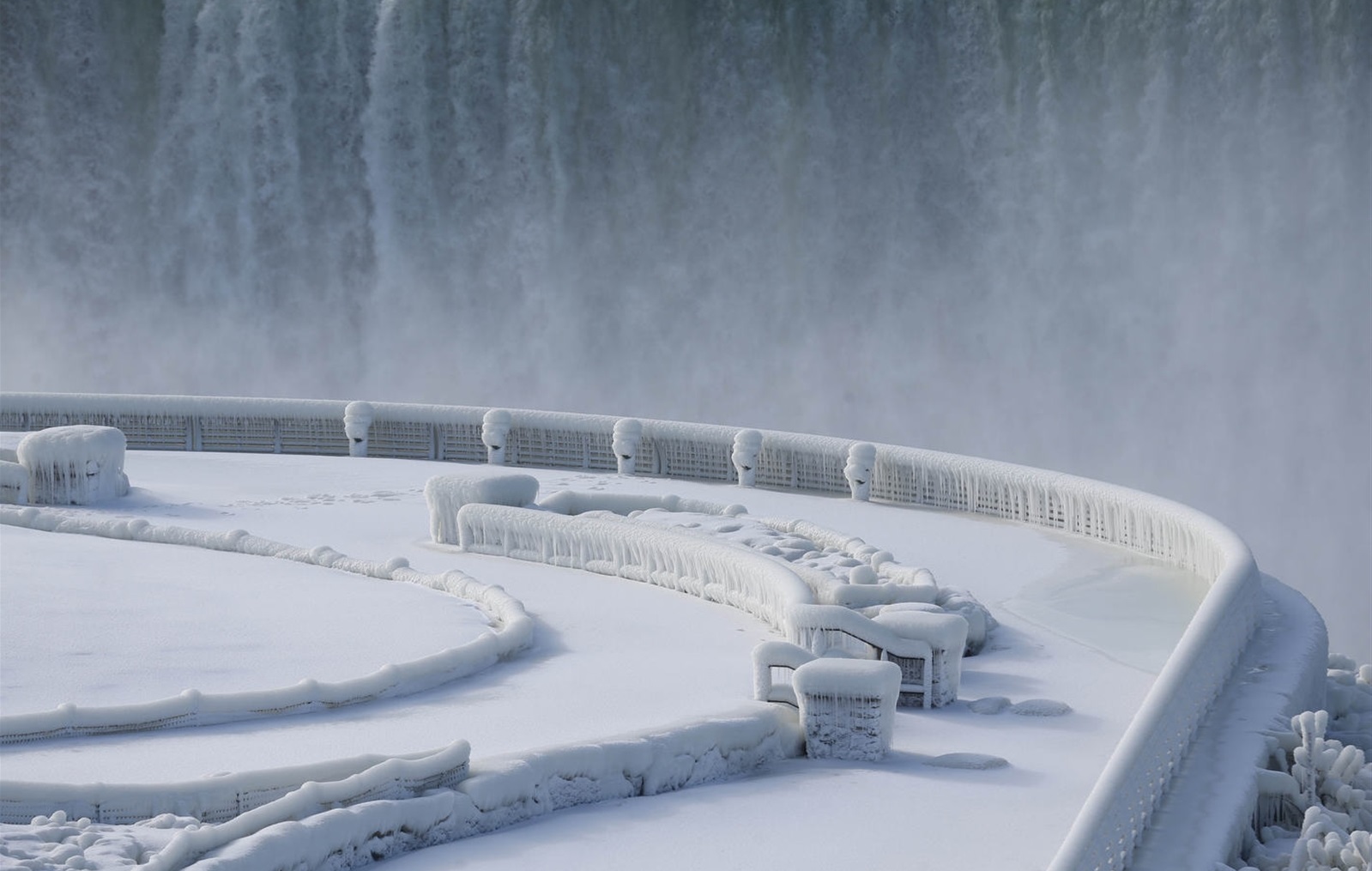 Terrapin Point, which is not open to the public at this point, overlooks Horseshoe Falls. (Sharon Cantillon/Buffalo News)

Too late did I learn that in winter, the area surrounding the falls at least 15 degrees colder than anywhere else. And remember the Ice Palace scene from "Dr. Zhivago"? I thought of that as I turned from Tesla, and looked around.

The snow and ice looked like weird white cave minerals, chiseled into crystals and globes. Ice coated the trees. When the sun peeked from behind the clouds, they sparkled. Here and there you could hear branches snapping off, the way they did in our October Surprise storm.

Ice was, simply, everywhere. It was the most beautiful thing. Those marvelous vintage coin binoculars, the type admired at other 100 Things stops including Old Fort Niagara and Letchworth State Park, were caked in white and looked like ice robots. Benches amounted to ice sculptures. People sat down on them, laughing. Kids skidded around the ice, doing belly flops.

We Western New Yorkers are a hardy bunch. 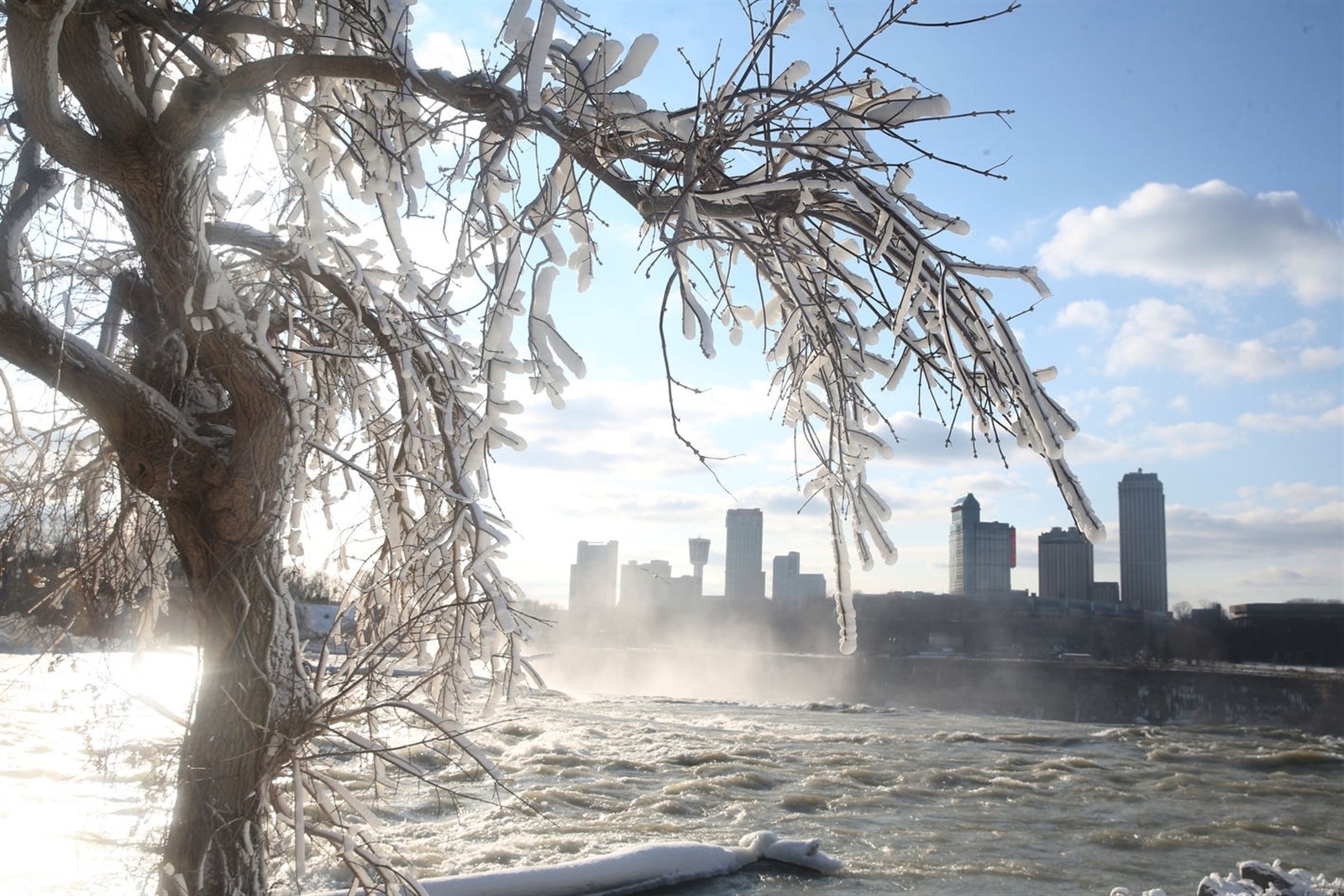 By the frigid rapids, two folks were bird-watching. They had been there four hours, obsessed by a huge convention of gulls grouped on a kind of iceberg. The wind whipped right through me. It was if my coat weren't even there.

Bill Price, one of the bird-watchers, was oblivious to the cold. Someone had reported a surprise sighting of a Slatey-backed Gull, a large, stout bird that breeds in Alaska, and he had his eyes peeled for it. He also loved the gulls gathered on the ice, a species known as Bonaparte's gull.

"This is the only place in the world where you can find Bonaparte's gull in this concentration," he said.

Back in the car, we pressed on, like the Perry Expedition, toward Terrapin Point. Tottering on my frozen feet to the brink of the falls, I stared. 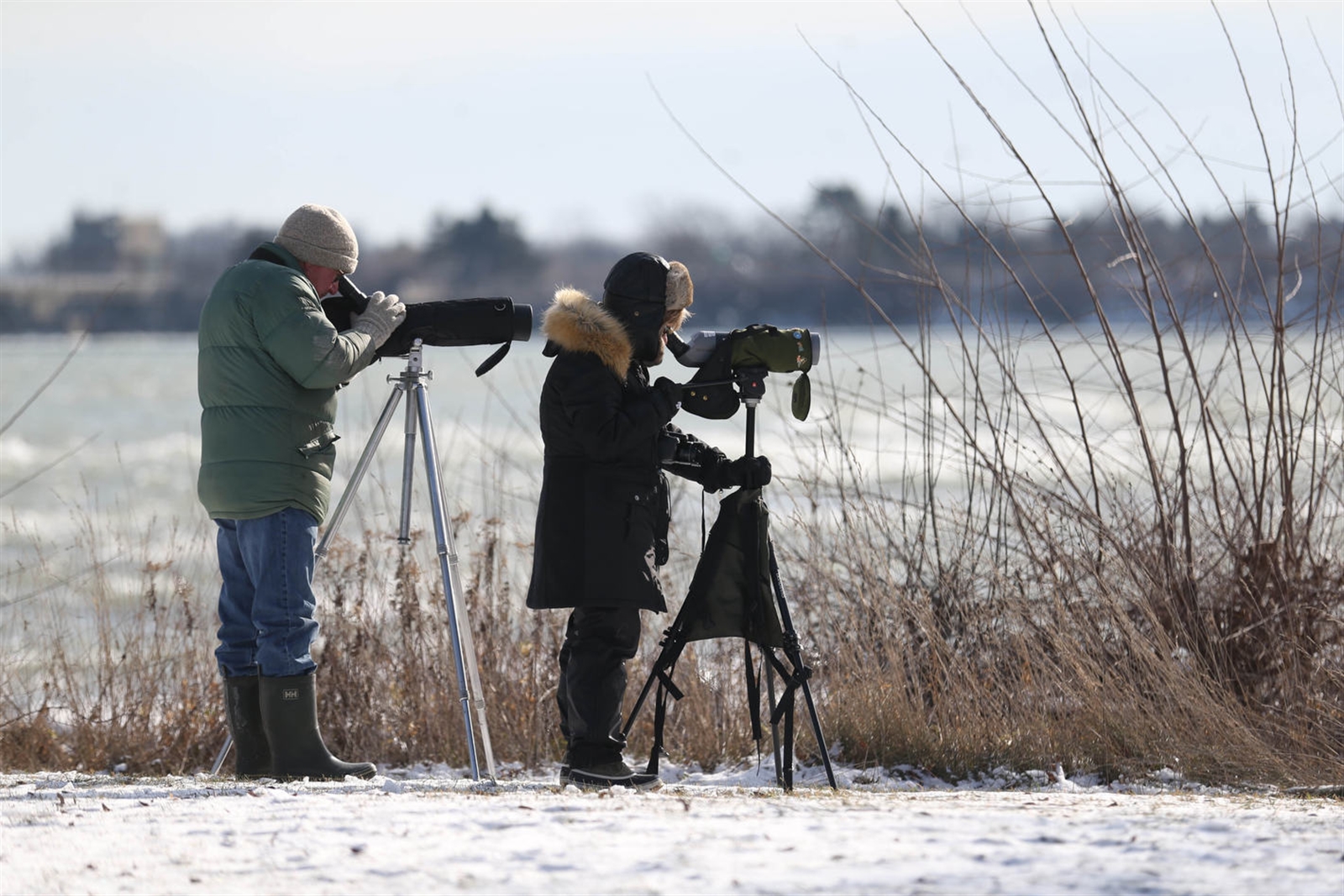 Birders Bill Price, left, from Vero Beach, Fla., and Bernie Kester, of Amherst, spend hours watching for the Slatey-backed gull on Goat Island near the shelf of Three Sisters Island. This rare gull from Alaska and the American Northwest has been spotted in the area recently and they are spending hours here in hopes of seeing it.

It was weird to remember that I had seen the falls not so long ago, only from beneath, and in a different time. That was on the Maid of the Mist, a summer adventure on our 100 Things list. That hot August day seemed worlds away. To think I had been down there at the foot of the falls, tossed around on that boat, drenched with spray. What a feel we had gotten of the power of nature.

And what a feel I was getting now.  I stared at tons and tons of freezing water, roaring, rolling and thundering. Ice cracked. Water flew into into my face. I could hardly look. It was the coldest sight in the world.

Two other visitors, a mother and daughter, looked happy and comfortable. They were from -- guess! -- Russia.

The mother said of the cold: "Next to Moscow, this is nothing." Asked what drew her here, she said, "My father, he died four years ago. This was a dream of his. And so I come to America." 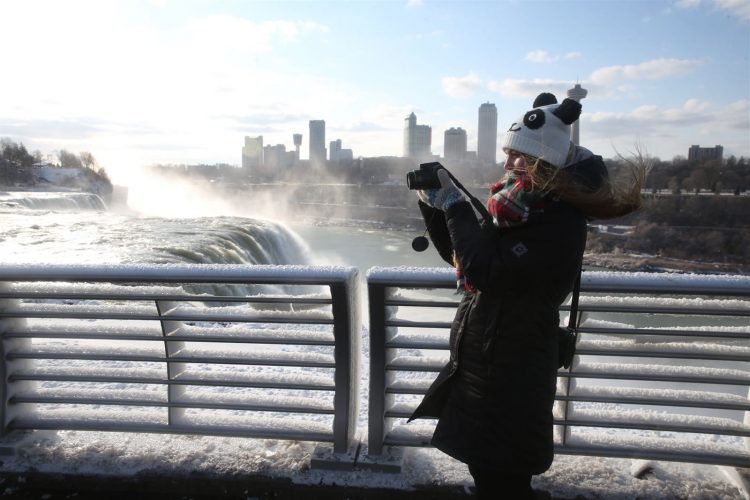 Not being from Moscow, I had to seek shelter. Sharon, our photographer, was dressed more warmly than I, and was heading up to the observation deck. I almost followed. Then I reconsidered, and took refuge at the visitors center.

The staffer there didn't want to be named, probably because she can't help laughing at us underdressed folks stumbling in foolish and half-frozen.

"We had a group from South Africa here this morning," she said. "They were dying. They couldn't figure out why their fingers weren't moving."

Wait, I thought in shame, my fingers weren't moving, either. What kind of a Western New Yorker was I?

Next time it will be different. I'll wear snow pants. A down jacket. Huge gloves. 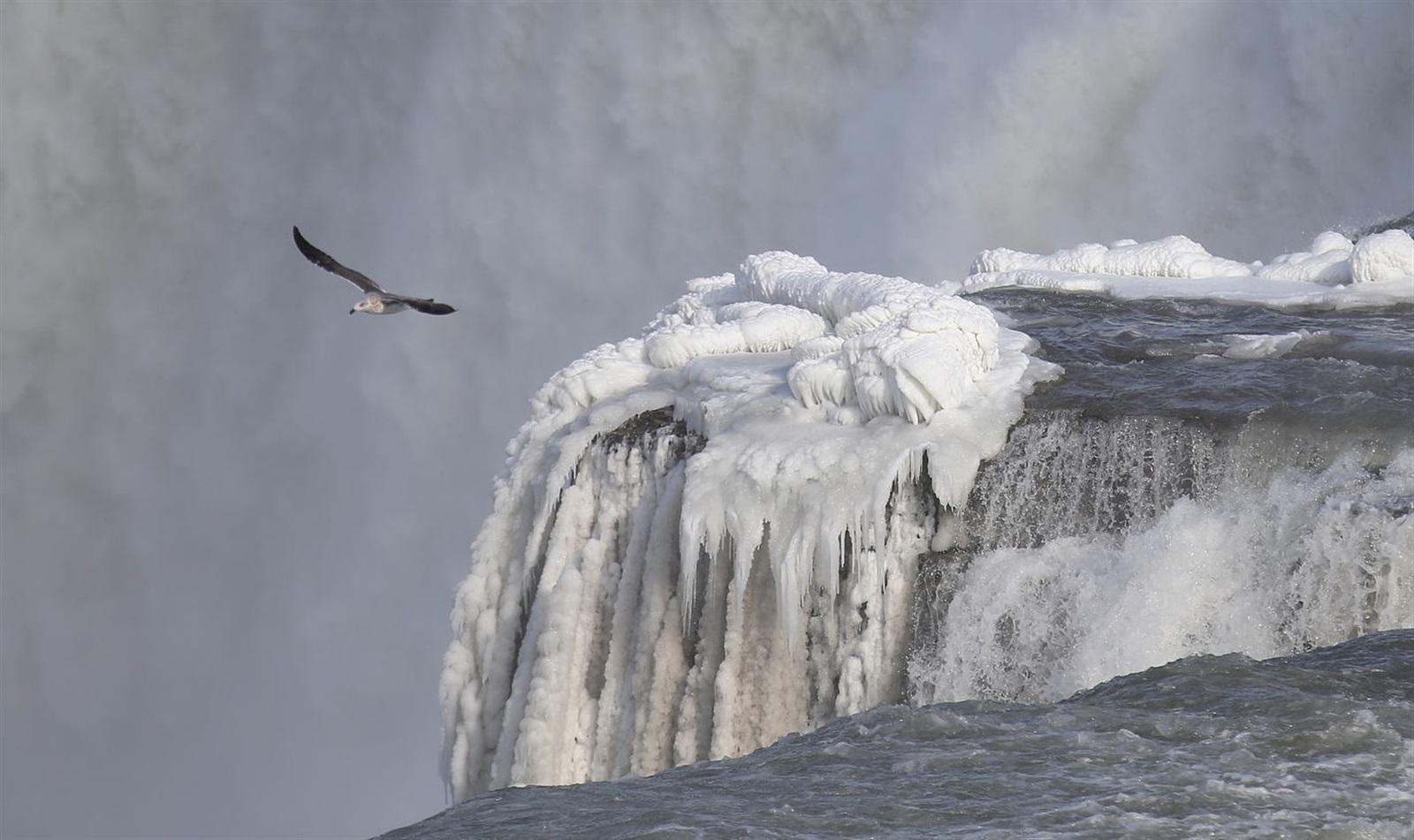