In certain corners of the restaurant landscape, a cocktail culture revival has helped make the custom cocktail list as much a restaurant fixture as the kitchen sink. Everything but is used in modern drinks, it seems, with component lists that launch a thousand Google searches. Ingredients you never heard of ensure you’ll travel beyond the mundane, but they can’t guarantee you’ll enjoy the trip.

Too often a brainstormed beverage’s first sip leaves you wondering if it’s your palate or the mixologist’s that’s off-kilter. Nothing diminishes the enjoyment of an ultra-modern cocktail like wishing it was a good old-fashioned Old Fashioned.

That’s not a problem at The Dapper Goose, a new Black Rock restaurant where my faith in the potential of bespoke cocktails was restored with some of the best original drinks I’ve found in Buffalo.

The room has been lightened since it was Black Rock Kitchen and Bar. The tin ceiling is silver now, and a half-wall separates the bar area from diners, who occupy tables and banquettes. 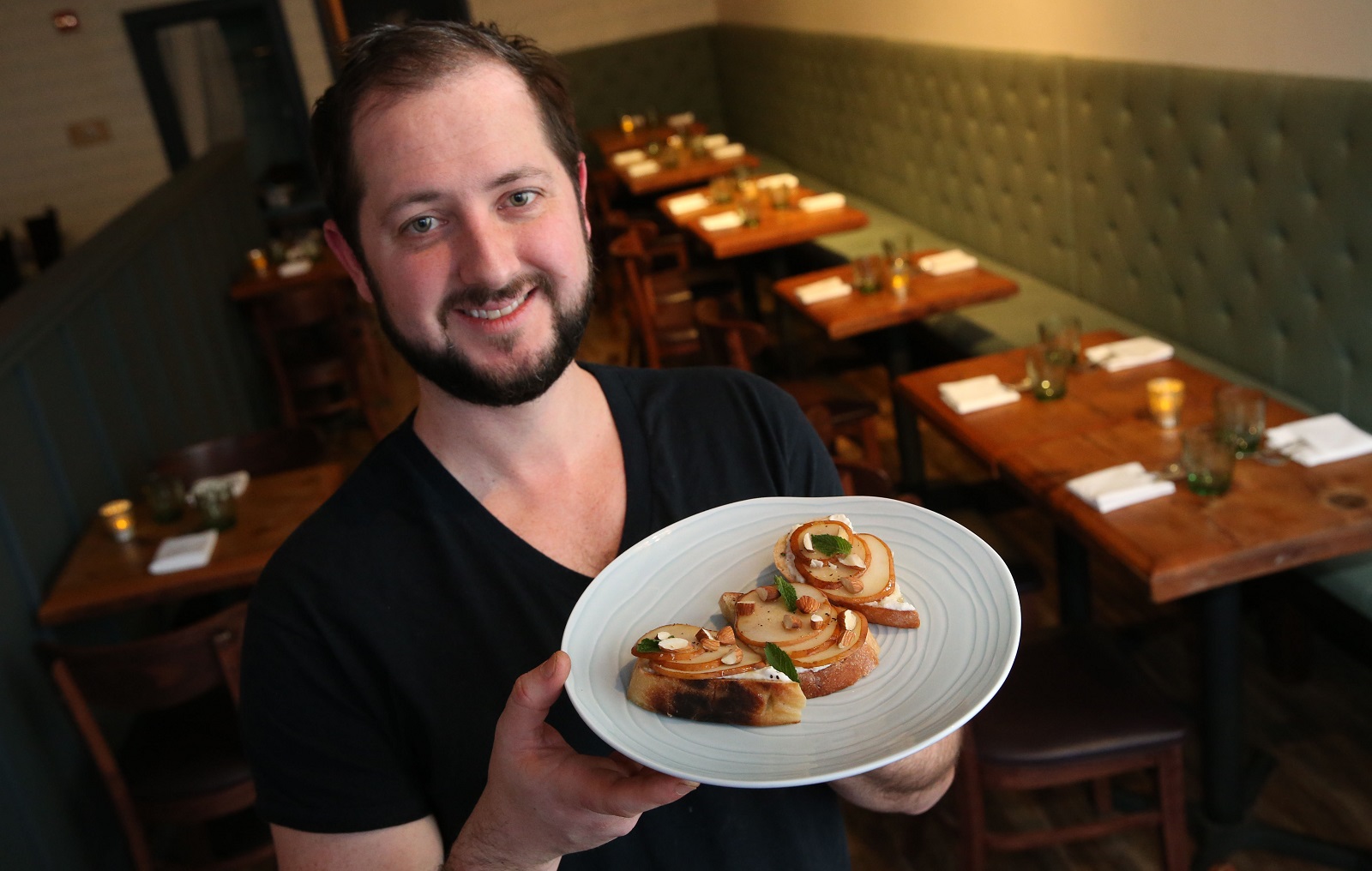 Owner Keith Raimondi grew up in Olean before making his professional bones in the Philadelphia cocktail world. He returned to Buffalo with an experienced squad that is the foundation of his staff, including general manager Peggy Wong out front and Jesse Ross running the kitchen. He recognized me at the door and served our table.

Cocktails came first. Broken Garden Tools ($10) used celery and parsley syrup for a gin-based drink with the refreshing air of a summertime salad. The Hecklinger ($11) is for Manhattan fans who want to step out, with Meletti amaro buffing the edge off the rye whiskey, and a spark of Thai spice bitters. 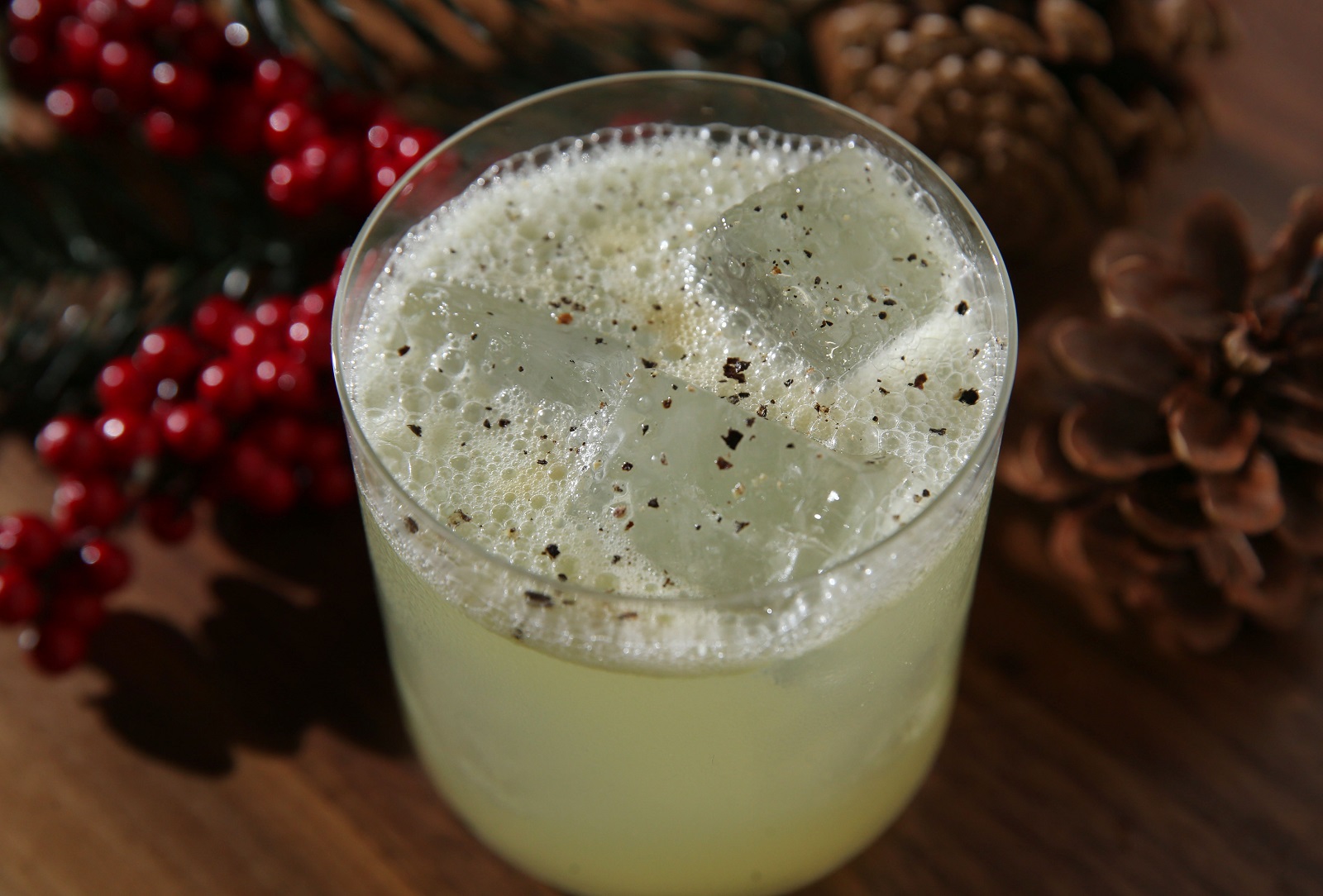 The Dapper Goose's Broken Garden Tools is made with dry gin, lemon parsley syrup, celery juice and Moroccan spice bitters topped with cracked black pepper. It began as a summer drink and has become so popular that they've kept it on the menu. (Sharon Cantillon/Buffalo News)

Pineapple cocktails are typically fortified with rum, but the Bizzy Izzy ($11) proves whiskey partners well with its tropical fruit, brightened with lemon and amontillado sherry.

What was rare about cocktails wasn’t their ingredients, but their balance. Instead of one ingredient drowning out the rest, Dapper Goose’s drinks achieved a rare degree of harmony.

Ten wines by the glass ($8 to $10) included none of the usual suspects. Two were sparklers. The other eight – white, red, rose – are served on draft. There’s a bottle list too, plus canned and draft beer.

With drinks, you’ll want a few bites, naturally. The Dapper Goose does not sell chicken wings.

Choose one, three or five cheeses ($6 to $24) with distinctive accompaniments like pear butter, caramelized onions and buckwheat honey, served with plenty of crusty housemade Italian bread. Or a well-calibrated charcuterie board ($16), bearing silky chicken liver mousse, pork terrine studded with chiles and black garlic, and rich duck rillettes, with pickled onions and coarse-grain mustard and more of that excellent bread, toasted. 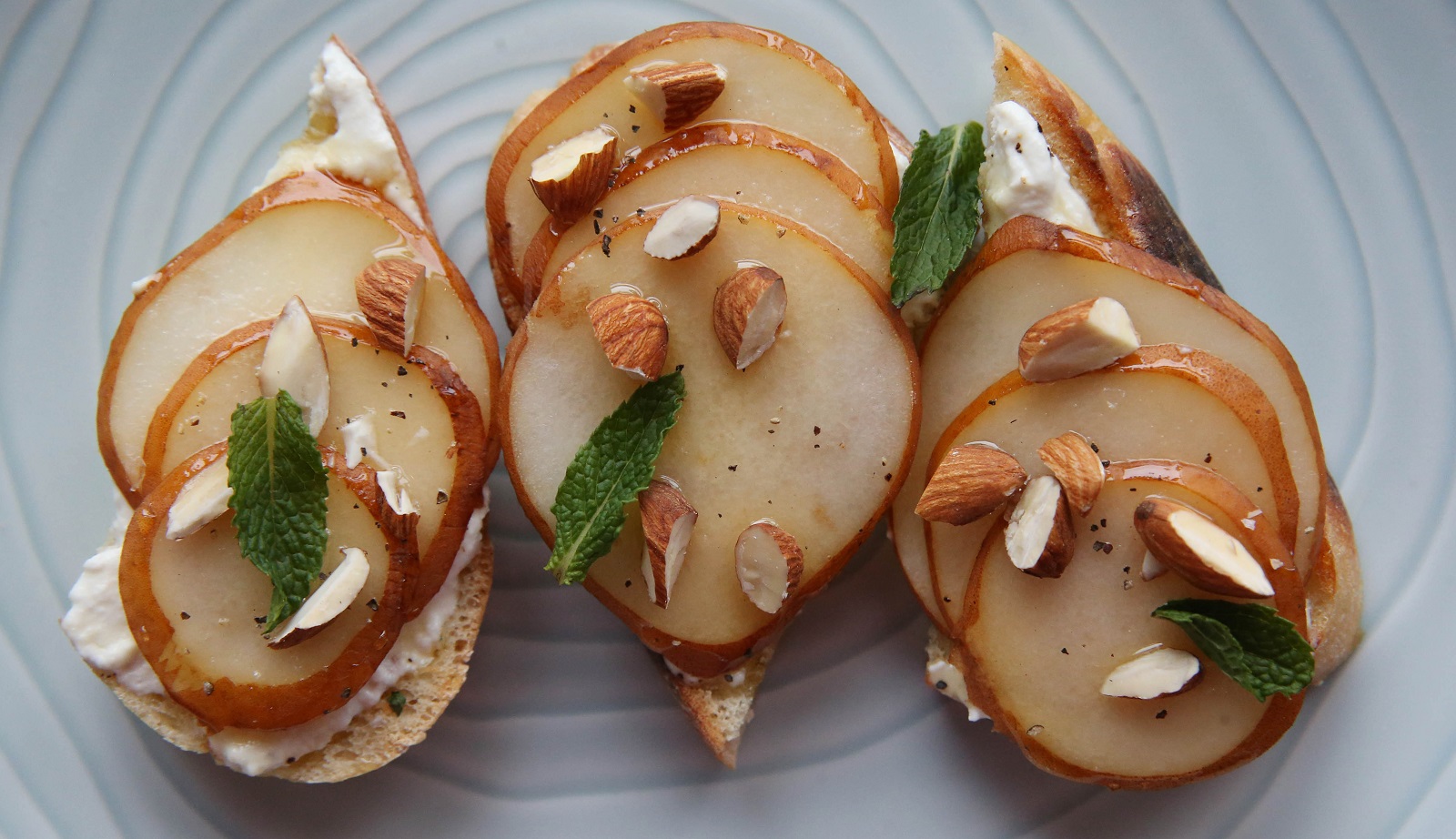 More chiles gave a cream-of-tomato-thick broth a tasty buzz of heat in a tortilla soup ($11) fortified with fresh avocado and tender chicken.

Vegetarians looking for a drink and a snack don’t have to settle for french fries. Vegetable hits included fried cauliflower with aromatically herbal Green Goddess dressing ($6). Charred green beans ($7) are tastefully blackened for dipping in charred onion mayonnaise, with pepitas for more crunch. 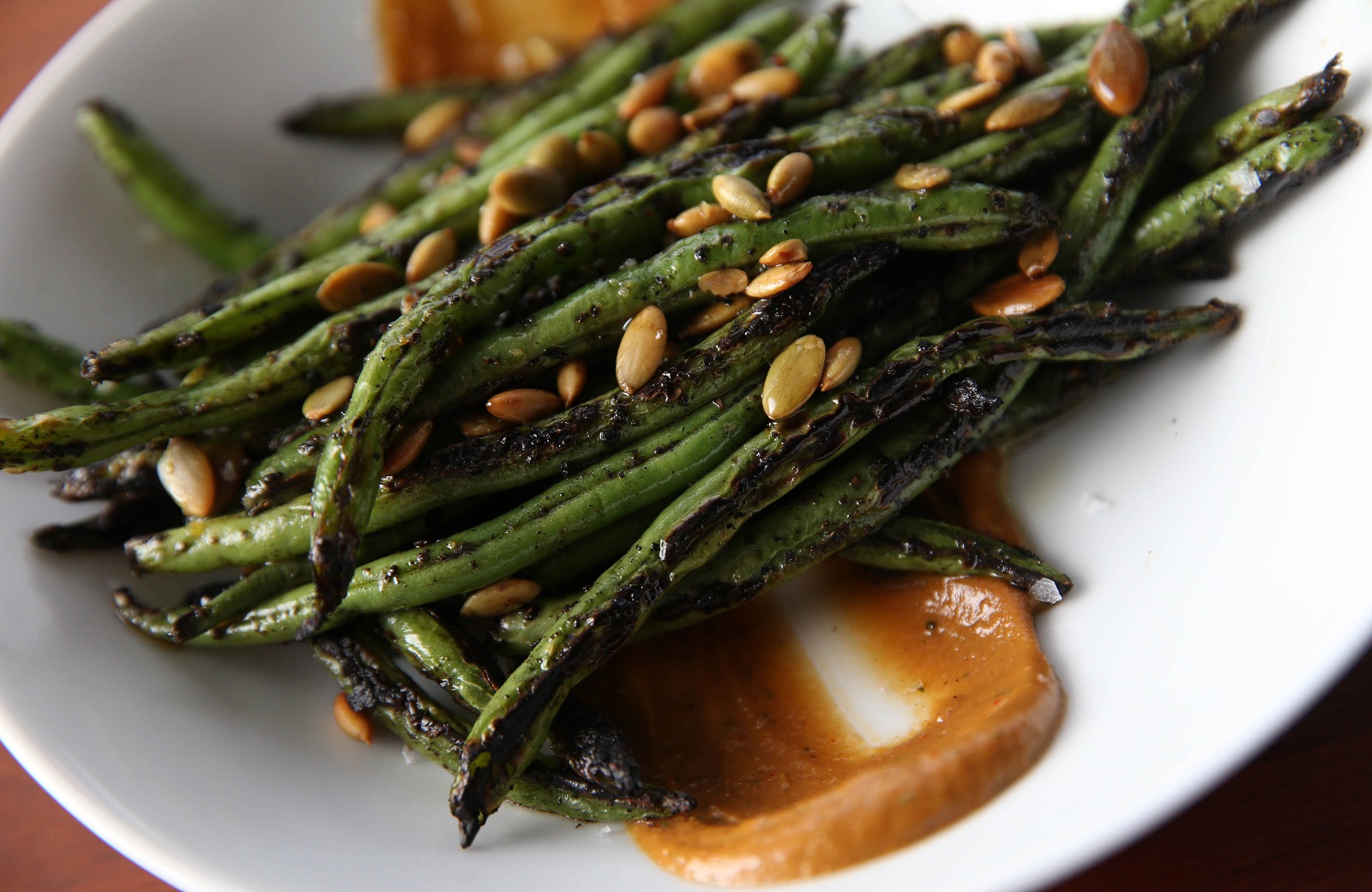 Carrots in fermented carrot chile sauce ($7) and a gratin of sliced fennel bulb ($6) were tasty but off-puttingly crunchy. Firm discs of kohlrabi and radish, blanched and buttered, made a fine foil for sesame-lemon aioli ($7).

Korean fried chicken ($17) was a leg and thigh over kimchi fried rice, with pickled cucumbers. It wore shiny, sweet glaze with enough chile heat to give some guests pause. Its soft, lacquered skin lacked crispness, the salient pleasure of my favorite Korean fried chicken, exhibited in an earlier version of the dish. 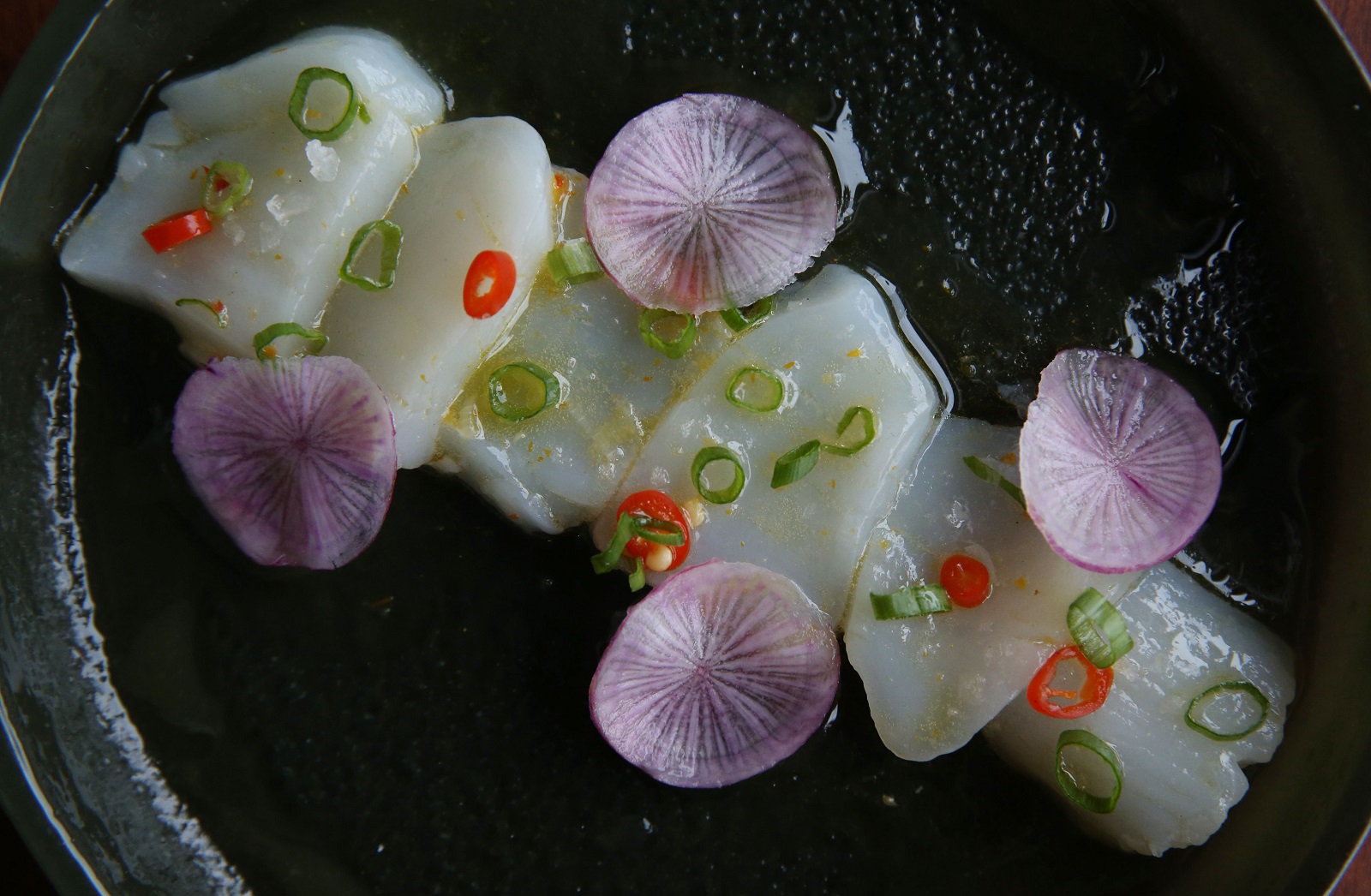 Pork shoulder ($22), served on white bean puree with brussels sprouts, was plenty hearty, but bland. I wished for more acid or punch in the tomato vinaigrette or bean foundation.

A baked-to-order lasagna ($20), housemade pasta sheets layered with mushroom Bolognese, satisfied Italian cravings with a dish appreciably lighter than the pasta-brick standard. The mushroom sauce was so robust I thought it was meat. Raclette instead of mozzarella – and a shower or Parmesan – added savory depth to a vegetarian knockout.

Reasonably priced dishes that deliver, including a strong vegetarian streak, are reasons enough to add The Dapper Goose to your dining dance card. But if you're hunting the best cocktails in Buffalo, I'd say you absolutely owe yourself a gander. 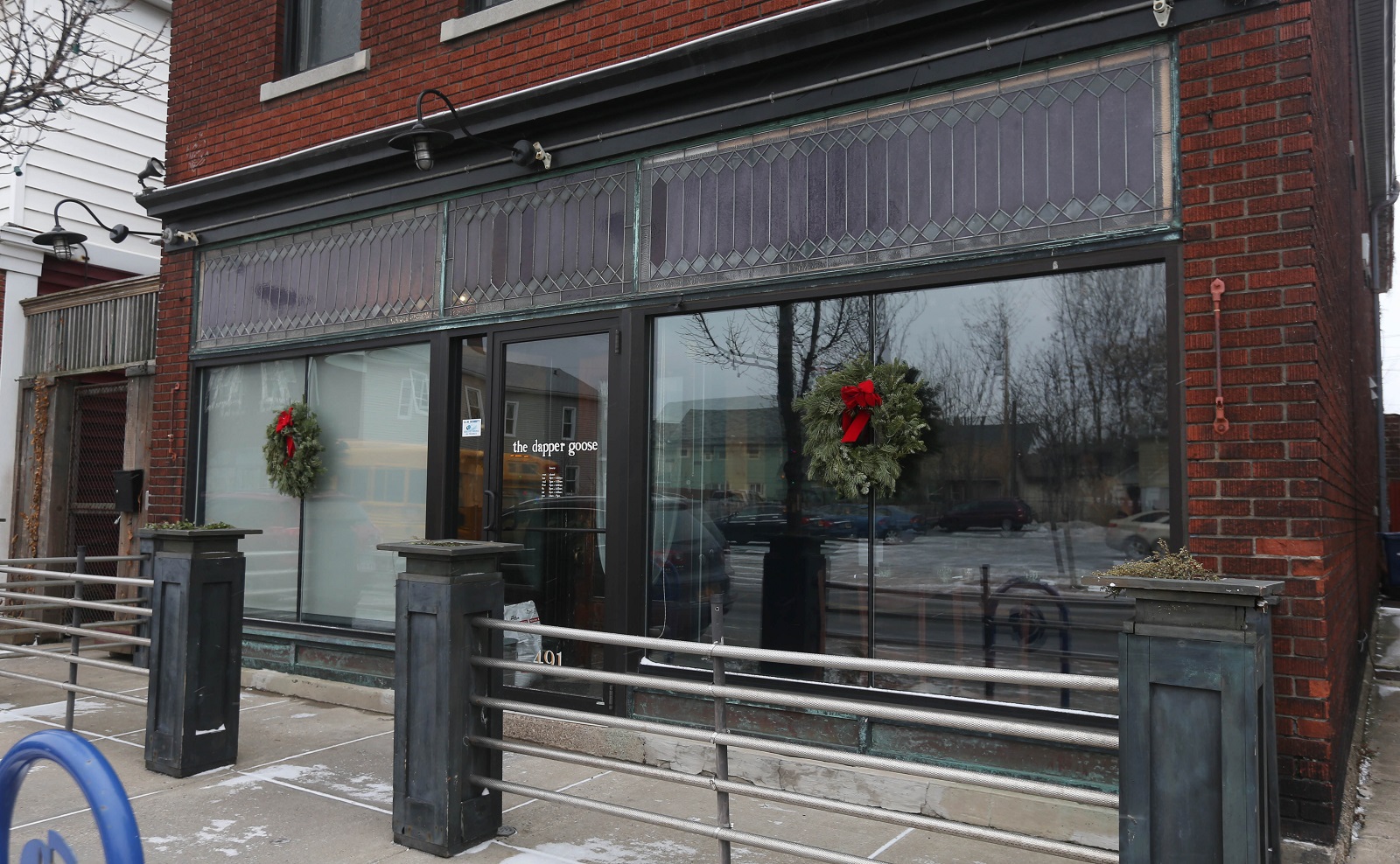 The Dapper Goose is at 491 Amherst St. (Sharon Cantillon/Buffalo News)