The movie “Animal House” turns 39 years old this summer, but its central theme makes it timeless. As long as there are college campuses, there will be students who struggle to find their way.

Which brings us to the Sabres’ midterm analysis.

It has not been the finest semester at Sabres University. Buffalo has been at or near the bottom of the standings most of the season. Goals and players were absent. Too often, the Sabres were simply boring.

As “Animal House” showed, things can change at the end. Guys who stumbled or crashed became doctors, lawyers and senators. Of course, others went to jail or were despised by their countrymen.

The Sabres have time to rewrite their season. They hit the midway point showing signs of positive change, then stumbled badly in Carolina in the opening game of the second half. The big test will be playing well consistently for the final three months.

Here’s a look at the first half, with “Animal House” as an inspiration. If you’ve never seen the film, don’t worry. The quotes from the movie serve as the guide.

Bluto Blutarsky Award (“Over? Did you say over? Nothing is over until we decide it is”): Jack Eichel.

A lot is being made of New Year’s Weekend, with good reason. Eichel stood in the dressing room and said losing was unacceptable. He said nothing the Sabres were doing was good enough.

His teammates recognize his talent level. Reverence may be too strong a word, but they certainly respect what he can do. It’s clear they also respect what he says. He said a lot.

Eichel is making an impact on the ice, too. He’s on pace to lead the Sabres in goals despite missing the opening 21 games. 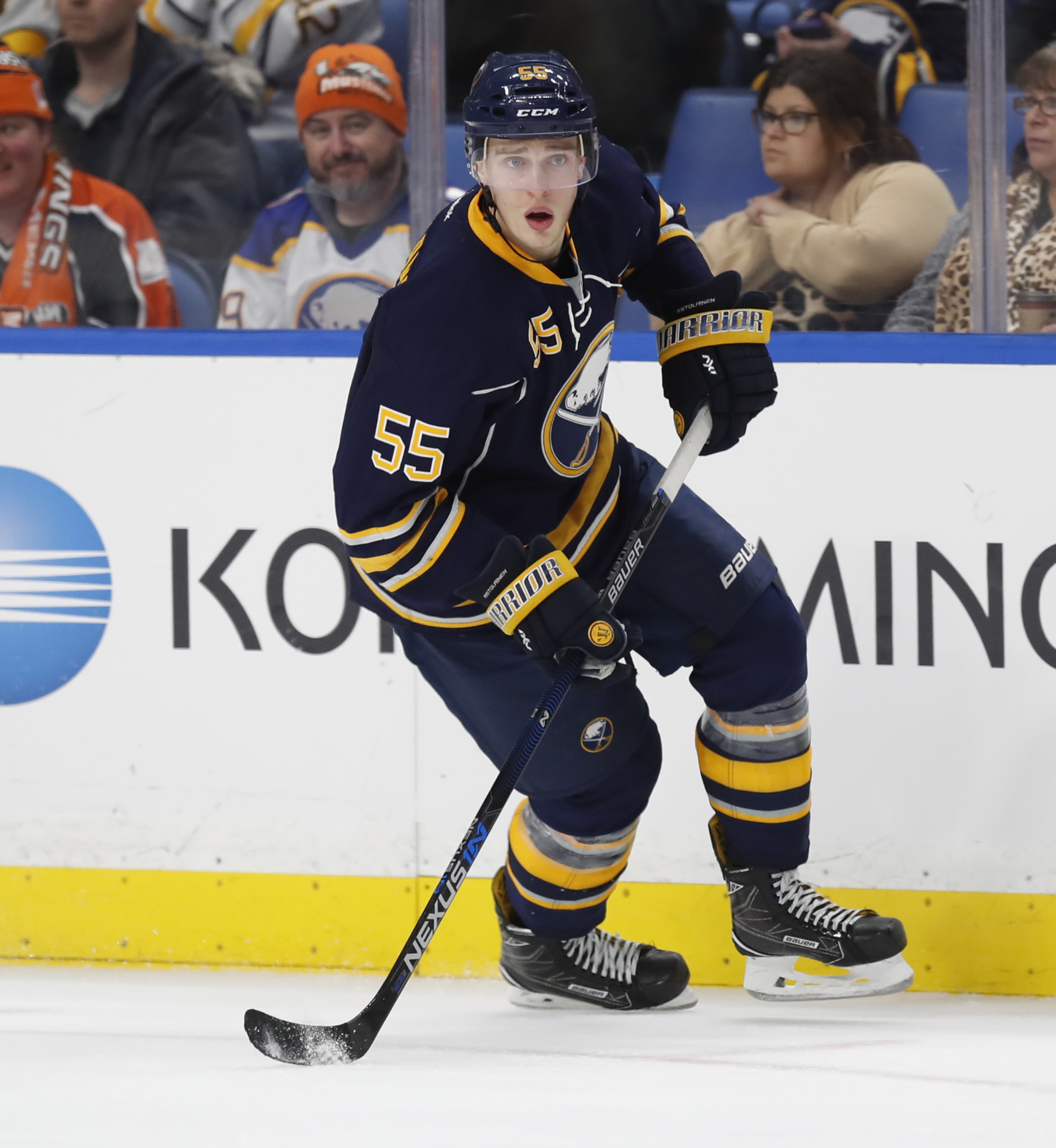 The defenseman has been the Sabres’ most complete player. He hit the 41-game mark leading the team in assists and was tied for the top spot in points. He has dramatically improved his defense.

Ristolainen is also the most competitive player on the Sabres. Just ask any of the teammates who’ve absorbed a crushing hit from him during practice and watched him skate away with a pleased grin.

Chip Diller Trophy (“Thank you, sir, may I have another”): Anders Nilsson.

The goaltender keeps earning starts and victories. He hit the midway point on a 5-1-2 run while improving his save percentage to .930. That was fifth in the NHL, ahead of Montreal’s Carey Price and Boston’s Tuukka Rask – and way above Nilsson’s career save percentage of .900 entering the season.

Professor Jennings Trophy (“I’m not joking, this is my job”): Dan Bylsma.

Much like Jennings’ teachings of 17th-century authors, Bylsma’s words have failed to inspire the audience. The Sabres come out flat too often. They’ve made the same mistakes repeatedly.

It could be a clash of ideals. The Sabres have added skill and speed the past couple of years, but their system inhibits puck control. Buffalo ranks fifth from the bottom in Corsi at 47.1 percent, according to Corsica.Hockey. Although Bylsma has a Stanley Cup on his résumé, he still has to prove himself in Buffalo. 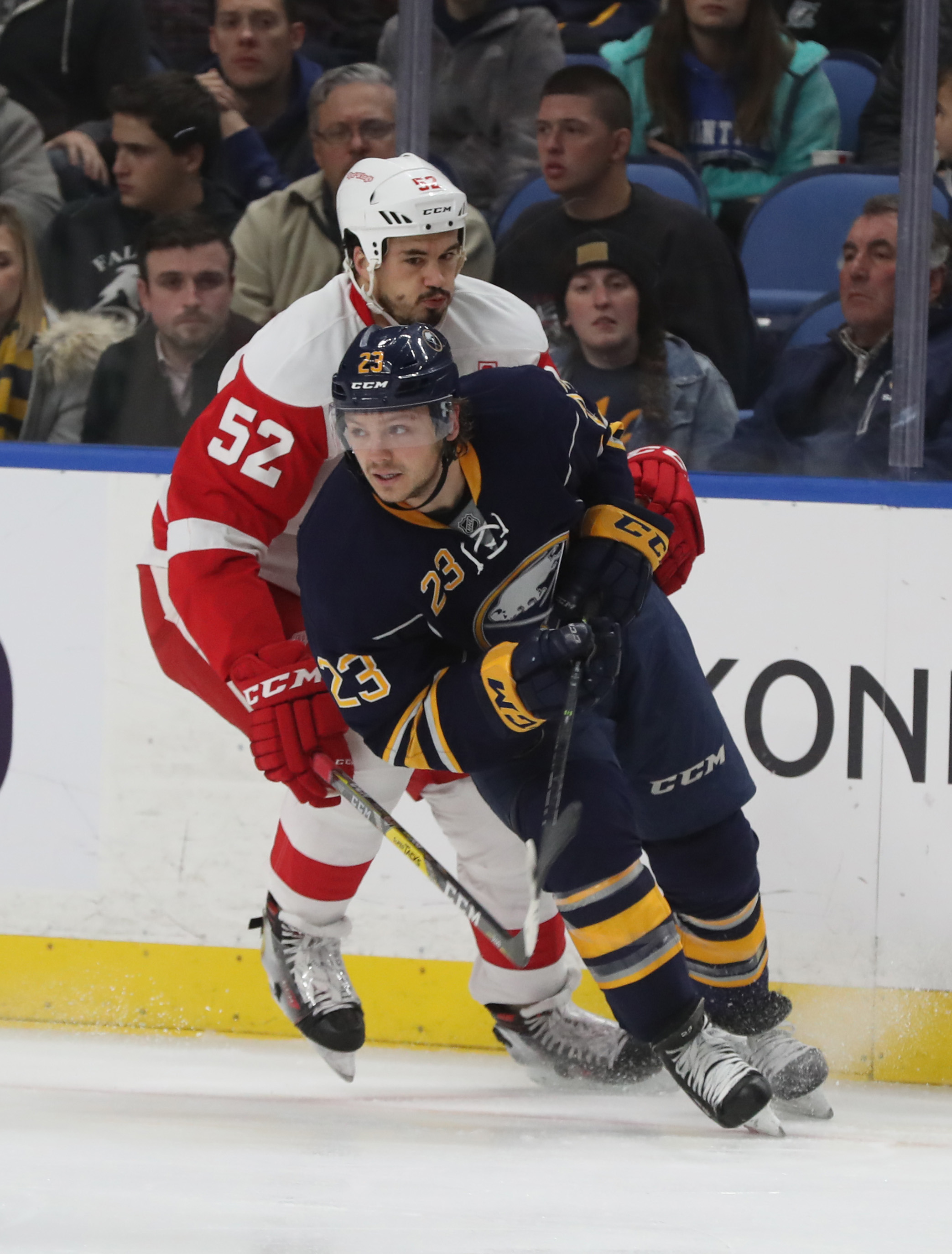 It takes passing to get the offense moving, and Reinhart has provided it. He leads Buffalo forwards in assists, nearly matching last year’s total of 19 in half the games. He’s growing into the smooth, mature-thinking skater that the Sabres expected when drafting him.

The defenseman has been seen almost as often as Taro Tsujimoto, the fictional player drafted by the Sabres in 1974. Kulikov suffered a bad break during his preseason debut – how often does a bench door open during a check? – but it doesn’t change the facts. The Sabres expected him to be a top-pair defenseman who could do it all. Instead, he’s done nothing. He has no goals, one assist and a minus-10 rating in 20 games. 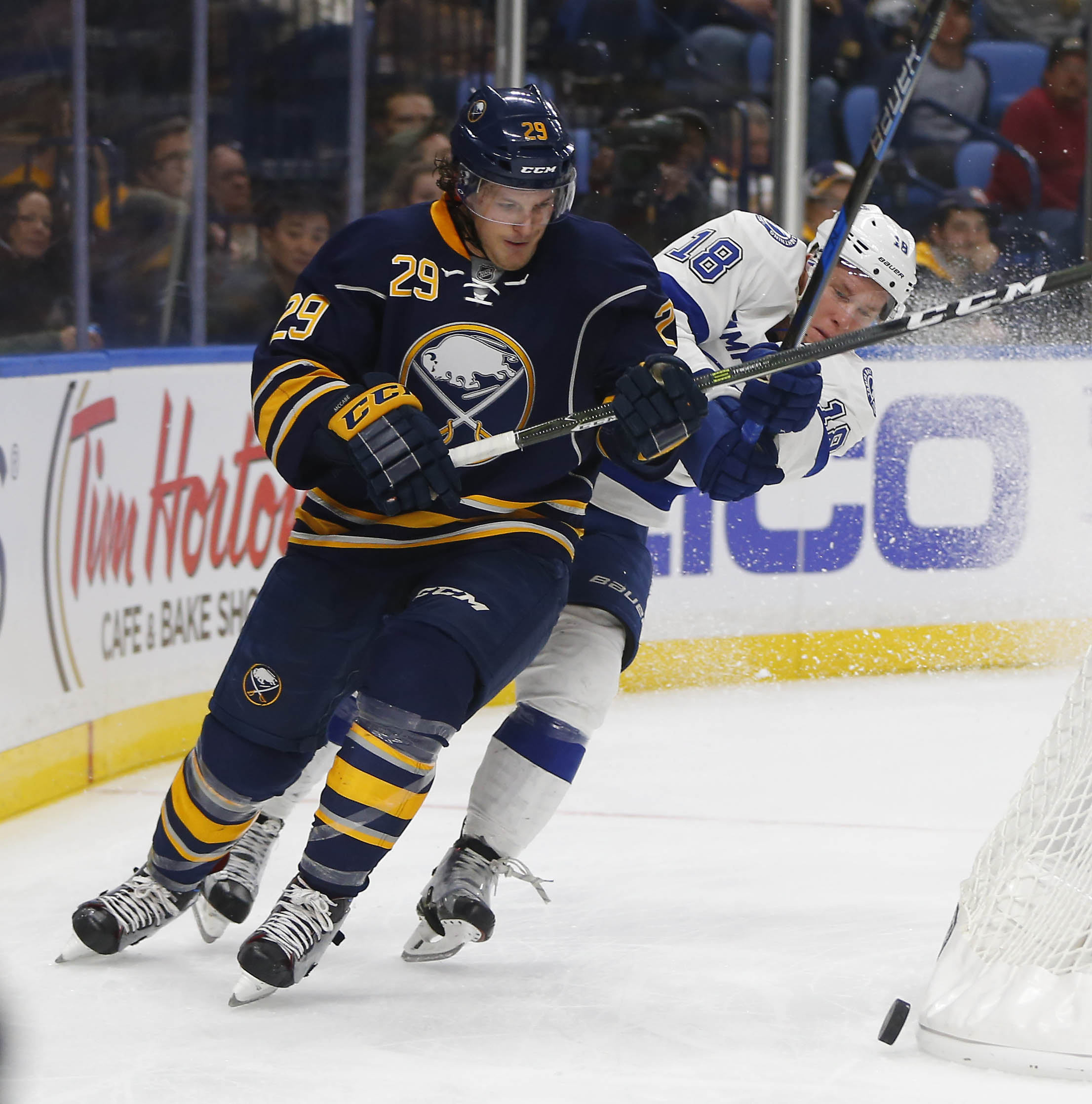 The defenseman gets this honor for delivering the hit of the season. His blast of Patrik Laine concussed the Jets’ Rookie of the Year candidate and showed the Sabres can be physical.

Given up on waivers Wednesday, Grant floundered through 35 games with the Sabres and failed to find the net. It’s a common occurrence. He didn’t score in his opening 75 career games with Buffalo, Calgary and Ottawa. Only two forwards in NHL history have played more without a goal: Gord Dwyer (108 games) and Tim Sestito (101).

If owners Terry and Kim Pegula need money, they should forget the oil wells and charge people to sit with the Sabres’ general manager. His blunt commentary during games is amazing. Like “Animal House,” however, it’s for mature audiences only. 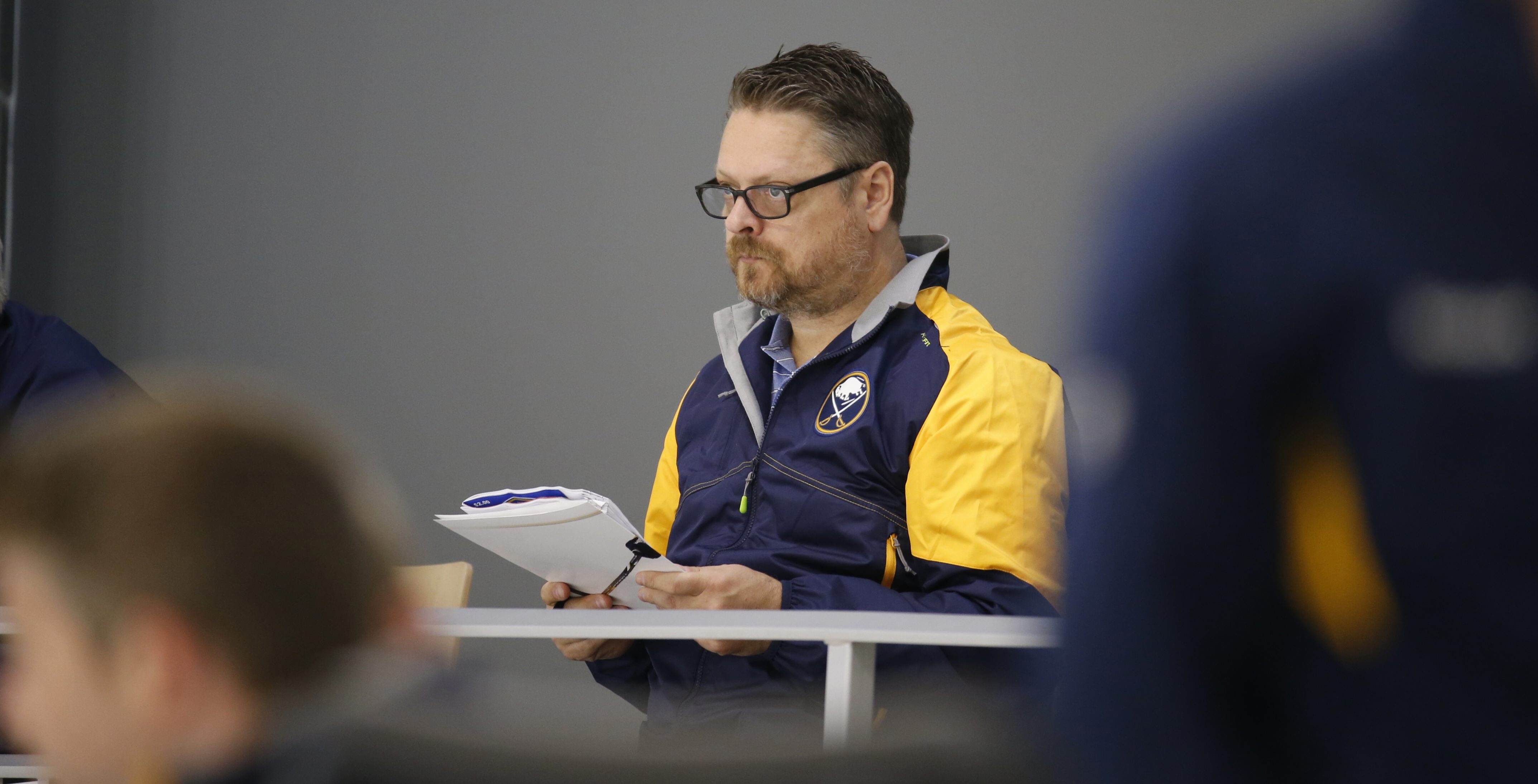 One of two new assistant coaches, Ward has established himself as the vocal member of the group. Every team needs a coach who can yell positive and negative comments, and Ward eagerly handles the job during practice.

The rookies scored their first NHL goals, collecting a treasured memento. However, they’ve also looked like first-year players at times. Buffalo has used seven rookies (Casey Nelson, Hudson Fasching, Brendan Guhle and Evan Rodrigues are the others), and they had combined for just five goals and two assists in 64 games. 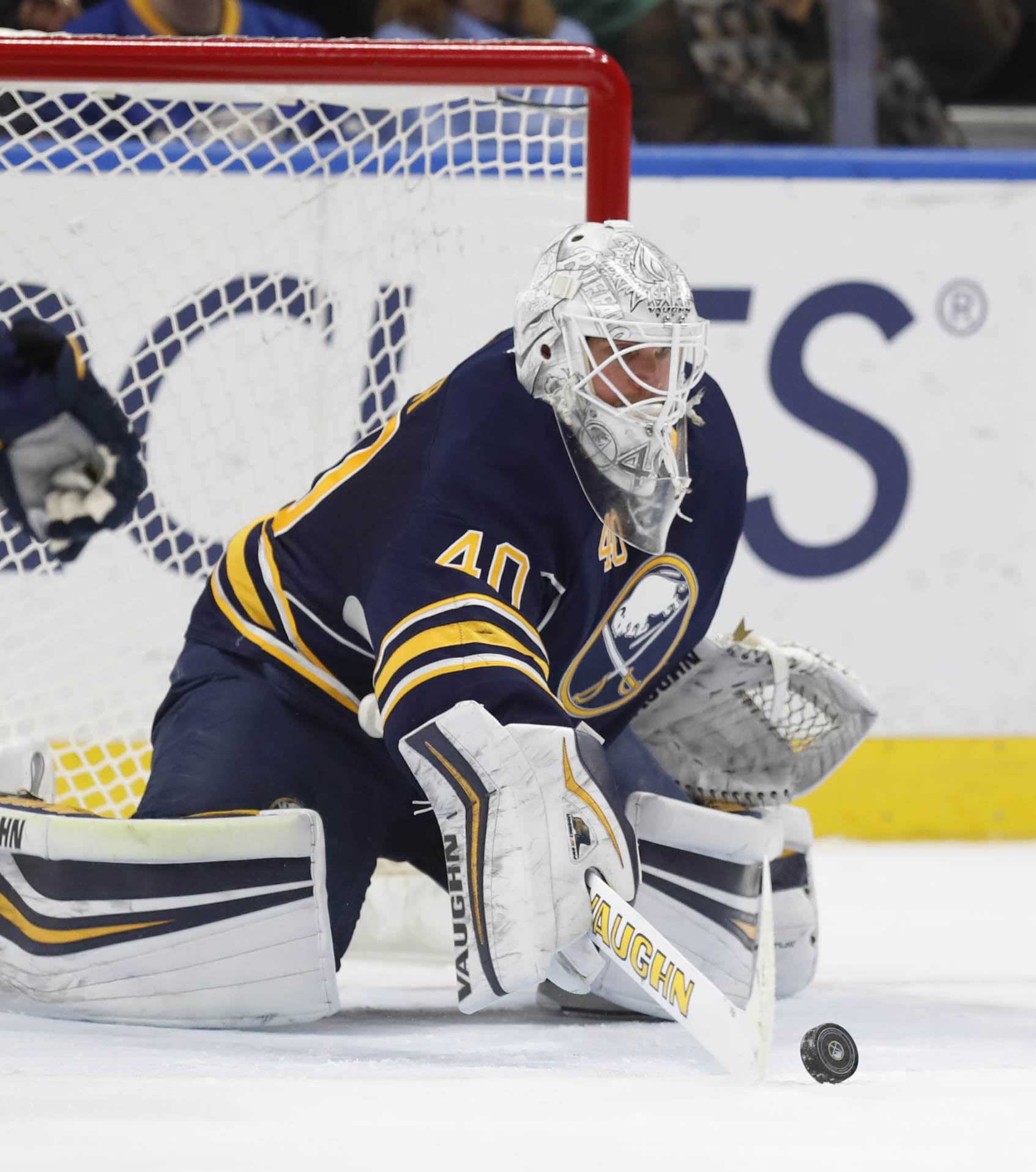 It’s always fun to watch goaltenders get involved in scrums. Lehner enhanced his reputation as a battler by manhandling Winnipeg’s Bryan Little before attempting to go toe-to-toe with 6-foot-5, 260-pound Dustin Byfuglien.

Unfortunately, Lehner has also fought the puck during shootouts. He’s failed to stop any of the six shooters while falling to 0-3 in the breakaway challenge. His save percentage is a very respectable .921, but his losses combined with Nilsson’s victories have hurt his standing.

In his first year with the Sabres, Okposo is the team’s lone All-Star. He led Buffalo in goals during the first half and was tied at the top in points. He’s also been as consistent as advertised, with his effort rarely fluctuating from shift-to-shift.

O’Reilly is on pace to lead Buffalo in points despite missing time with a midsection injury and appendectomy.

Double Secret Probation ("The time has come for someone to put his foot down"): Zach Bogosian, Josh Gorges.

Bogosian hasn’t settled in at either end of the ice, recording just three assists and a minus-8 rating. It’s not what Buffalo had in mind when it acquired him in the big trade with Winnipeg.

Much of Gorges’ problems stem from misuse. At this stage of the 32-year-old’s career, he shouldn’t be on the top pair and playing upwards of 20 minutes per night. He has the tenacity to skate in lesser duty, but he isn’t being put in a position to succeed.

Not only does the opposing power play get a chance, it gets a glorious opportunity to capitalize. Buffalo was dead last in penalty killing at 73.9 percent, allowing at least one goal in 21 of the first 40 games. It’s reminiscent of an exchange in “Animal House” between Stratton and Blutarsky:

“This situation absolutely requires a really futile and stupid gesture be done on somebody's part.”