It’s a tricky situation for Chautauqua, and local fisherman and avid angler Rich Davenport of Tonawanda shared his insight after a visit on Sunday. The combination of heavy show and high lake levels in the northern basin of the lake around Maple Springs is creating some shoreline issues. Shoreline ice is non-existent for at least 20 to 30 feet according to Davenport. He did say that once you get beyond the shoreline and slush, some good ice up to 5 inches can be found in spots. Around Mayville, the area was spotty but improving. However, that was before the wind and rain Tuesday. Thursday rains will probably be even worse. The Southern Basin of the lake was much better. Reports of 7 inches of clear ice was coming from Burtis Bay, but the shoreline was soft. Overall, the shoreline will be affected for the worse by the rain and warm temperatures. Exercise caution and follow all of the ice fishing safety protocols. On a final note, be sure to check out the Catch of the Week gallery online at buffalonews.com. Evan Walsh of Lancaster caught a huge crappie while fishing off Long Point recently, weighing in at 3.69 pounds. Had he weighed it in the same day he caught it, it could have been a new state record! He caught it on a jig. The state record is 3.75 pounds.

A ton of ice was coming down the river on Tuesday. It affected both shore and boat fishermen. Capt. Vince Pierleoni of Newfane was trying to work Devil’s Hole and probably had a dozen hook-ups but the ice took care of all but two of them. Lake trout and steelhead are still available if you can work the river properly, from Devil’s Hole to the Niagara Bar in boats, the gorge and Artpark from shore. Shore casters like Ricardo Davila of Wheatfield continue to catch fish using a mix of spoons and spinners. One of his favorite the past week was a chartreuse-colored BC Wobbler spoon with some pink tape and beads. On a side note, one duck hunter on Tuesday was caught out in Lake Ontario and it took him an hour and a half to get back in to the launch ramp because of the ice. Be careful out there.

Catches of the Week

The Niagara Fishing and Outdoor Expo continues to hook 'em

Saith Shine of Niagara Falls took the lead in the NYS Winter Classic Tournament with a 10.07-pound steelhead from 18 Mile Creek at Burt, catching it on a VooDoo jig last weekend. Flow has been around 70 cfs with stained conditions, but that could change with the inch of rain in the forecast. However, you do 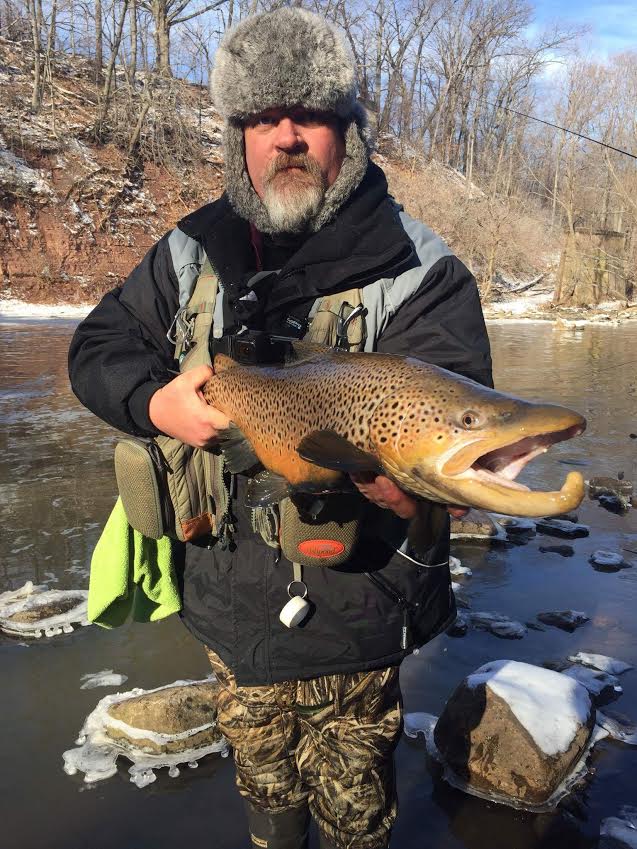 Greg Schloerb of Amherst caught this big male brownie the same place he caught his last one - below Burt Dam on 18 Mile Creek in the Town of Newfane. And like the last one, he was using one of his hand-tied jigs. This is one of the reasons he was named Angler of the Year on the Fishing Nerds Facebook site for 2016.

have an opportunity to catch a trout or a late-run coho. Use baits that are brightly colored and most anglers fish under a float. “Low and slow” is how Greg Schloerb of Amherst put it. He caught another bomber brown over the weekend using the same hand-tied jigs in the same spot. Over in Wilson Harbor, there was 4-5 inches of ice, but the rain on Thursday of this week will probably create some unsafe conditions along the shoreline. The Oak Orchard River offers decent fishing as well.

Everyone we spoke to didn’t have anything positive to say about any of the Erie tributaries. And with the weather calling for an inch of rain or more on top of the snow the area saw south of Buffalo, flood warnings are in place for the next few days.

Warm wind and rain will keep any more ice from building right now and you may have to snoop around to find some solid ice that you can contend with safely. For example, Glenn Strzelczyk of the Town of Niagara found some solid ice in Ransomville at Meyers Lake. While the small lake had a few big cracks in it, it was holding well with 6 to 8 inches of hard water … but that was before the rains came. Caution is advised no matter where you go. He has done well on bass using small jigs and tubes.

Silver Lake was offering anglers a little action in the shallows. According to Scott Brauer of Gasport with the Clam Ice Team, pike guys were doing well. Bluegills were cooperating, but they are the typical Silver Lake size. Again, that was before the rains on Tuesday evening.

Tim Thomas with the New York State Winter Classic Tournament reports the North Country has some pretty good ice going on right now, perfect timing for Black Lake in St. Lawrence County. This Saturday is the Black Lake Challenge (not to be confused with the lake near Hogwarts of Harry Potter fame). The fourth annual contest is being sponsored by Fish Creek Bait and Tackle in Hammond. Fishing starts at 6 a.m. and ends at 4 p.m. Entry fee is $15 for adults; $5 for kids 15 and under. For more information call 315-323-6842.

Some nice fish have come to the scales after the first couple weeks of action. In addition to the Saith Shine steelhead, the top pike is a 21.51-pound lunker caught by Tyler Seamon. It is believed he caught it from Delta Lake around the Rome area, but exact location is not required when weighing in. Top walleye is 9.27 pounds, caught by Robert Law on Black Lake. First-place pickerel is a 5-pounder reeled in by Alec Savage from Chaumont Bay. Top perch is from Seneca Lake, a 1.87-pound slob caught by Steven Wright. Crappie leader is a 2.25-pound fish from down in the southeast corner of the state, reeled in by Kevin Riley. Bluegill/sunfish leader is Eric Wilsey with a .98 pound fish from Big Bay on Oneida Lake.

Capt. Bob’s Fishing Derby started up on Jan. 2 and the early leaders are Barry Ball of Alden with an 11-inch Lake Erie perch, Stan Travis 0f Cowlesville with a 8.53-pound northern pike from Silver Lake, Bob Frost of Alden with a .77-pound sunny/bluegill, and Shawn Firkins of Lockport is leading in the crappie division with a .76-pound Chautauqua Lake fish. The derby is on-going. Stop in to their Clarence shop for details.