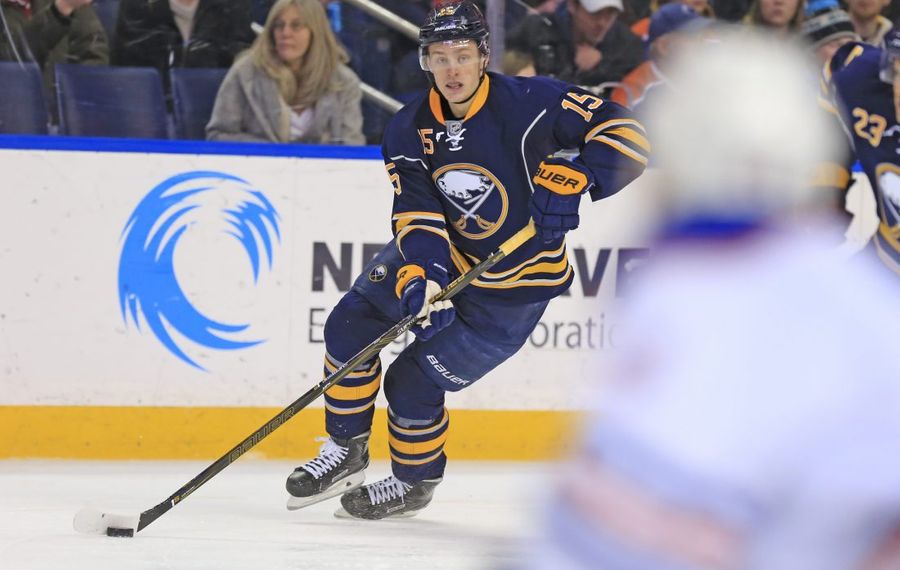 Jack Eichel said he knew he was getting close to the number. He didn't know Tuesday was the night until your intrepid columnist gave him the heads-up following the morning skate.

Easy to second that notion. It seems like a lot less than 18 months ago that we were in Sunrise, Fla., watching Eichel walk across the stage at the NHL Draft to put his Sabres sweater -- and the hopes of a franchise -- over his shoulders.

What have the Sabres gotten for their 100 games? By the numbers, Eichel has 32 goals and 38 assists for 70 points. He has six two-goal games and 16 multi-point games, topped by the four-pointer in his hometown debut at Boston on Dec. 26, 2015.

Of course, Eichel's presence is about a lot more than mere numbers. He's 20 now, already maturing as an NHL player. It's not just about skating and shooting up and down the ice. It's a total package.

"It's all about your preparation being consistent," he said. "If you want to become a top player in the league, you have to be ready every night. I think I've done a pretty good job at that with the consistency this year. Maybe it's not been rewarded statistically but I always believe you'll get more bounces sooner rather than later.

"I've looked at practices, at being better prepared, being a better pro. Look at the best players in the world. Look at Sidney Crosby, Jonathan Toews. They're good every single night. You want to try to be like that."

There have been some nights since he returned from his high ankle sprain where you could tell Eichel just didn't have it. Not unexpected. But you see with each passing game how he looks more explosive, like he did last year. The jump and the power stride are there.

On one play Tuesday, he toe-dragged Philadelphia's Radko Gudas silly to set up Sam Reinhart, who just fired high over the net. There's  one or two of those plays from Eichel almost every night.

It's no coincidence the line-in-the-sand moment to this Sabres season is Eichel's eruption in the dressing room in Boston after the dreary New Year's Eve loss, and his forceful words in the room here the next day.

The Sabres are 3-0-1 since and were in complete control for the last 30 minutes of Tuesday's win over reeling Philadelphia, which suddenly doesn't look like the playoff lock it did during its 10-game winning streak last month.

Eichel talked earlier in the year to a couple national outlets about how he was dipping his toe in the NHL waters last year. Not any more.

"When you're a rookie, you're just not really sure how the National Hockey League works completely until you're in it," he said. "You have to do a lot more listening, watch people and pick up on how they do things. If you want to be a vocal person, you want to be somebody who's a leader, someone that steps up and stands up and says what needs to be said, you have to come to the rink and work hard every day.

Eichel first met up with coach Dan Bylsma at the 2015 World Championships in Prague, before Bylsma was even hired for the Sabres' post. The story has been told a lot but it bears repeating: Bylsma did plenty of video work with Eichel during that tournament and a lot of the movie time was spent watching Crosby, especially the way No. 87 played without the puck.

"He worked extremely hard last year at becoming a more complete player and working hard on both sides of the puck," Bylsma said. "He's still working to do that and he's gotten better with that. He's been thrust into situations this year as the top centerman and the top checking centerman. We've put him out in situations where he's had to play defense against top guys, win draws, battle down low. And he's done that. He's that player for us.

It sure has. Eichel is putting together a neat career highlight reel. That first goal in his first game against Ottawa. The breakaway goal with one second left in OT to burn Carolina's Cam Ward. The four-point game in his first appearance in Boston. The two third-period goals against the Rangers this year in his first home game after his injury.

Picking favorites? Even Eichel said that was tough.

"The first one is special for sure," he said. "You wish you had won the game but it's your first NHL game, first goal, your dad's birthday. That's something you'll always remember. That game in Boston the day after Christmas is pretty cool. Whenever your parents are there, and can see something like that, it's pretty nice."

This is a unique time in NHL history. You have a 40-something in Jaromir Jagr still having success. Big names like Crosby and Patrick Kane are still at their peak. Alex Ovechkin has tied Rocket Richard in goals and is at 999 points.

But then you mix that with all the kids. Eichel and Connor McDavid. Auston Matthews and Mitch Marner. Patrik Laine. Aaron Ekblad. Look at how memorable Team North America will be in the course of history as a World Cup kickoff to the league's centennial celebration.

"It says a lot about our game right now. To me, our game is in a great place," Eichel said. "To play in the same league with people I grew up idolizing and to be able to play in the NHL at 19-20 years old is very cool. And you're seeing teams are really giving younger guys opportunities."