I write from a hotel room bed. Sometimes I frantically type on my phone. Other times I write while driving, recording ideas as voice memos.

I am a stand-up comic, or a comedian when I want to sound more formal. I grew up in North Buffalo, with my four younger brothers and lived there for most of my life. The first time I tried this thing called stand-up comedy I was 18. I performed at comedy clubs, fire halls, sometimes even living rooms, in and around Buffalo for most of my 20s.

Recently, I spent a year with friends in Connecticut, just 40 minutes outside of New York City, to be close to the Manhattan comedy scene. Even more recently, I walked away from my secure middle school English teaching job of eight years to put 100 percent of my efforts into this comedy life.

Now I am 33, mostly unemployed, and live with my beautiful fiancee Lauren (also a Buffalo native) in Raleigh, N.C. I book as many shows and weekends as I can in cities all over the country. Right now, I have a few dates on my calendar and strive each day to add more, as this is now my sole livelihood.

For one upcoming show worthy of note, I will be coming home to open for comedian Sebastian Maniscalco at Shea’s Performing Arts Center on March 25. As I prepare for the show at the historic theater in front of a crowd of 3,700, my largest audience to date, this weekly journal will serve to share my day-to-day experiences as a working comic and maybe give readers an idea of what it is like to perform, travel, book shows, generate new material, and survive as a stand up comedian in 2017 who got his start in good old Buffalo.

I didn’t have any shows this past weekend, but after visiting Buffalo for a week at Christmas and doing seven shows in Richmond, Va. for New Year’s weekend, it was nice to have a couple of days to recharge. 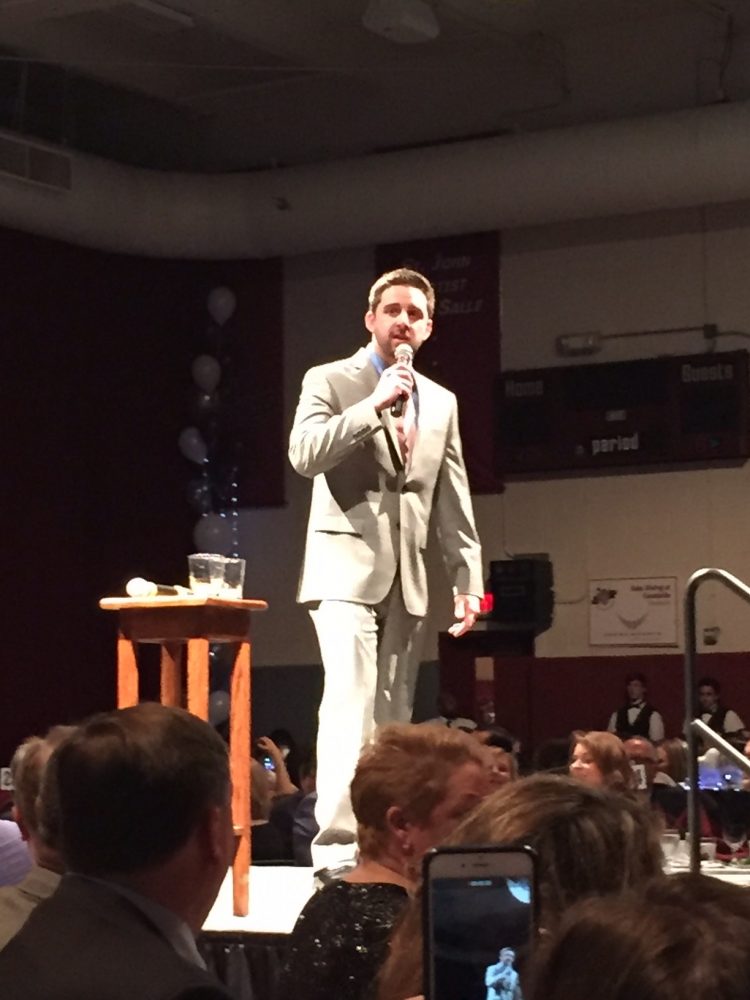 I still had a pretty busy week.

First, I found a store down here that sells Labatt Blue. That was important and first on the list. I also responded to a job posting that called for a weekly bar trivia host. I figured it would be fun to have a regular gig where I can get behind a microphone and have all the answers. I start on Wednesday.

I also started substitute teaching. It will be good because it seems I will be able to find work on any school day I choose to and can also take off any days I need to be on the road for shows.

Last Tuesday night I hit an open mic night at the local comedy club down here, Goodnights, which is similar to Helium in Buffalo. This particular Tuesday was a clean open mic. That means if a performer says anything that is considered a curse word, the mic audio is immediately cut and the stage lights go out.

The crowd of about 40 consisted of 23 comics who each were given three to five minutes of stage time. Lately, I have been trying to work out some new material.

Now that I am engaged, I probably want to lose some of my go-to jokes about the dating scene and shift the focus to something more current and honest. It’s challenging. It can take weeks to develop just a few minutes of new material that fits with the rest of my act.

The fact that I had to worry about not accidentally saying just one four-letter word while riffing made it even more difficult. The comic who went up two before me got cut for saying “damn.” Yikes. They’re strict down here.

I started with a go-to joke about my married friends and the crowd was somewhat into it. Some of the new stuff I tried went over OK and some of it got little to no response. I decided to end on a punchline what could potentially be considered a dirty word. “Let’s see if this one turns the lights out,” I told the crowd. I led into a joke about a friend who doesn’t drink and the last word of the punchline hit. I was right. As soon as the laughs started, the lights went off, and while smiling, I left a dark stage to a smattering of applause.

The new stuff needs some work, but I’ll consider it a clever victory.

Brian will be writing about his stand-up life for the next two months, culminating in his March 25 appearance at Shea's. Visit buffalonews.com each week to follow along.