What most people will remember most from this year's World Junior Championships was the way they ended, with the Americans' spellbinding shootout victory over Canada Thursday in Montreal.

It serves as quite a lead-in for next year's tournament in Buffalo, and how many times between now and then will we see the video of that shootout as a way to pump the next USA-Canada matchup? Remember, that's coming in preliminary play outdoors in New Era Field.

But the bigger story should serve as a cautionary tale for the Sabres, USA Hockey and the International Ice Hockey Federation, which seems bent on squeezing every dollar out of this tournment it can. The Saskatoons, Halifaxes and Grand Forkses of the world need no longer apply because the IIHF clearly want big cities, big dollars.

Just as Toronto and Montreal did in the year leading into its event, the only way to get tickets right now for next year -- and thus guarantee a seat to help fill New Era Field -- is by buying groups of games. The Sabres are selling a gold package of all 31 games at $1,550, a silver package of 23 games for $1,265 and a bronze package in the 300 level of KeyBank Center for $690.

Seriously now, how many people in Buffalo are ponying up that much for junior hockey?

Right off the top, that's a bad miscalculation by all three parties. And the Canadian dollar is doing far worse than when the tournament was last here in 2010-11, when fans north of the border made up the bulk of the crowds. With the advent of StubHub and other sites, there's no reasons for fans to buy a lot of the uninteresting early round games as a way to ensure they get into the marquee events.

A package for the medal rounds would be a much better idea. And individual sales will come much later down the road. But even that comes with risk. Tickets for the worst seats in the Bell Centre for the Canada-Sweden semifinal went for $82.50, while the top seats went for $202.50.

The projected groups for next year have Team USA and Canada together with Finland, Denmark and Slovakia. The other group will be Russia, Sweden, the Czech Republic, Switzerland and Belarus, moving up from Division I. Latvia was relegated out of the main draw. That's plenty of ho-hum teams.

Again, this is junior hockey. The Sabres have a very disgruntled fan base right now and there's a pervasive feeling among the customers that the team doesn't care about its season ticket-holders at all. They're not spending even more money next year, so you need a different group of fans to buy.

But you're going to know very few of the players, even though history tells us you will know many of them 2-3 years down the road. How much is that worth to people?

How much is that going to be worth for the IIHF, USA Hockey and the Sabres to stage a tournament full of empty seats watching?

Ryan Miller is heating up and it's no coincidence the Canucks are doing likewise. After a terrible start to the season, they snuck into a Western Conference wild-card with Friday's 4-2 win over Calgary. It was a game Miller completely stole. The Canucks were outshot, 46-13, and outattempted, 84-22, but Miller made 44 saves while Calgary's Brian Elliott made just nine.

"It’s something I’ve thought about,” Miller told the Vancouver Province last week. "I try not to get distracted by the end results, but there’s something definitive about wins.”

Miller is in the last year of his contract in Vancouver and already seems to be in reflection mode about his time with the Canucks.

“I just wish I had more time to get out and participate, like I did in Buffalo where I was really connected to the community,” Miller said. “I don’t think the fans here have got to know me as a person because I’ve been busy with my personal life."

The reference is that Miller, now 36, and his wife are parents of a 2-year-old son, Bodhi.

Miller is fourth in wins among active goalies behind Roberto Luongo, Henrik Lundqvist and Marc-Andre Fleury and entered Saturday 21st all time. Only 11 players have reached 400, something Miller could do next season. The only question is where he'll be playing to do it.

Sobering reminder from No. 99 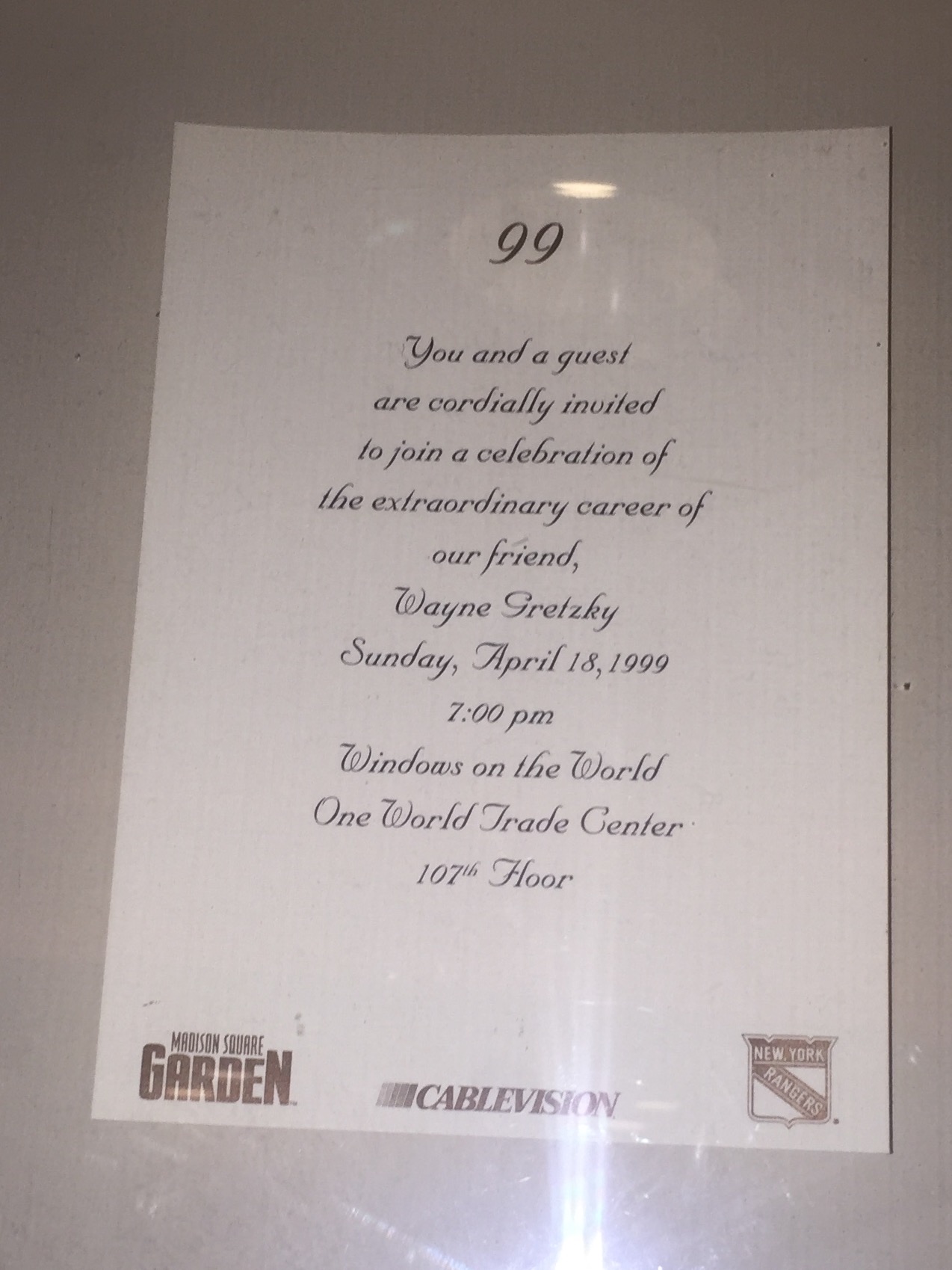 Madison Square Garden's billion-dollar renovation the last three years completely transformed the building into a modern venue with all the revenue-driven bells and whistles, but designers didn't forget their history either. The concourses are filled with displays and memorabilia of the great moments and the great athletes/celebrities who have been the center of attention since the building opened in 1968.

The wall dedicated to Wayne Gretzky's final game for the Rangers in 1999 includes the things you would expect like a jersey, stick, puck, scoresheet and program.

But I noticed a sobering piece as well upon visiting with the Sabres last week: An invitation to Gretzky's exclusive postgame party -- held at Windows on the World, the restaurant atop the World Trade Center where dozens died on 9/11. Whenever you go to New York, you're never too far away from a reminder popping up somewhere.

Full metal Jackets by the numbers

Want some perspective on the Blue Jackets winning 16 games in a row? The Sabres entered the weekend with 14 wins – all season.

Columbus outscored opponents, 64-27, during the its streak, which actually pushed a point streak to 18 games (17-0-1) before the Capitals ended it Thursday night. The power play was 15 for 53 in the 16 games.

The Blue Jackets got game-winning goals from 10 players (Cam Atkinson was the leader with three) and scored the first goal of the game 11 times. The team led after the first period 10 times while trailing just once (Dec. 13 at Edmonton). It led 11 times following the second period and also trailed just once (Dec. 3 at Arizona).

It's easy to forget the Jackets started the season 0-2 and were just 2-3-1 through six games. Through the next 30 games until Thursday's loss? They were 25-2-3. That's amazing.

---Patrick Kane admitted after scoring Thursday's overtime winner for the Blackhawks against the Sabres that he ignored coach Joel Quenneville's line-change orders and stayed on the ice a little extra on the play.

"As I was backchecking some of the boys were telling me 'Q' was yelling at me to change," Kane said. "I don't know if I kind of blew him off but I figured we had a chance there and decided to take it."

"The time I wanted him to come off was the right time, then it was too late and he had to stay," Quenneville said. "Give him credit. He knows the game and opportunities. It was a great play."

---The goal pushed Kane's career totals against the Sabres to 13 points in 12 games (seven goals, six assists). It was the third regular-season overtime goal of his career. He has five in the playoffs, tied for third on the all-time list with Edmonton's Glenn Anderson and behind only Joe Sakic (8) and Rocket Richard (6).

---The NHL's leading goal scorer since Thanksgiving entering the weekend? It's Leafs rookie Auston Matthews, with 15 in 19 games. He's on a 44-goal pace for the season.

---I caught two of the EPIX episodes on the Road to the Outdoor Classics and was unimpressed. By trying to follow four teams (Leafs, Red Wings, Blackhawks and Blues) instead of two, the series shortchanged everybody and did none of them well. As I expected, very little from the Sabres' Dec. 27 trip to Detroit. Just a few clips of the pregame ceremony honoring the 1997 Stanley Cup champions and a couple of game action.