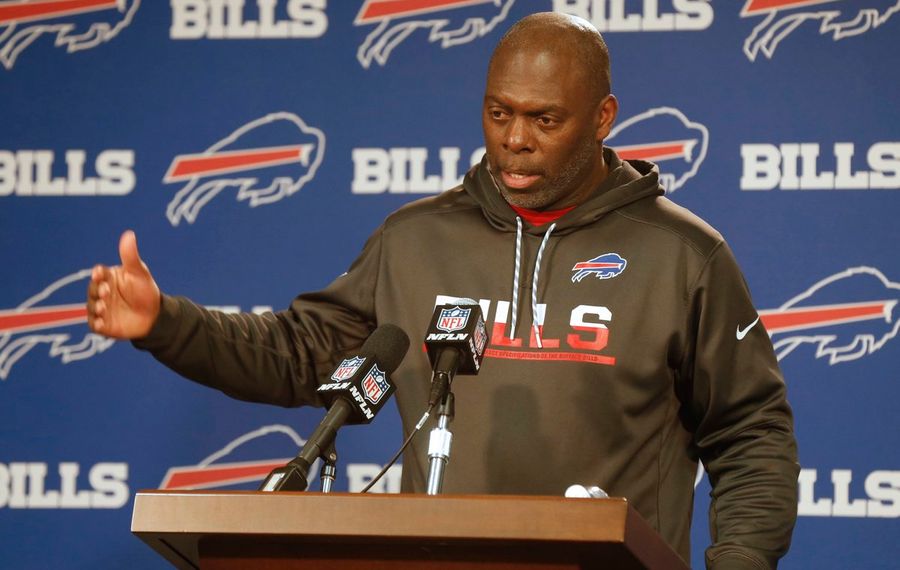 Anthony Lynn interviewed to be the Bills' head coach on Thursday, following Sean McDermott's interview on Wednesday. Here are some things to know about Lynn.

Playing career: Backup running back for the Broncos and 49ers; won two Super Bowls with the Broncos. Played collegiately at Texas Tech.

Experience: Lynn has 17 seasons of NFL coaching experience, beginning as a special teams assistant with the Broncos in 2000. He coached running backs for the Jaguars, Cowboys, Browns and Jets before Rex Ryan also gave him the title of assistant head coach in 2013. Lynn followed Ryan to the Bills in 2015, and he was promoted to offensive coordinator in Week Two after Greg Roman was fired. He served as the Bills' interim coach for the final game of the year after Ryan was fired.

Lynn's teams have performed exceptionally well on the ground. His teams have boasted either a 1,000-yard rusher or at least 2,000 combined rushing yards in 13 of the last 14 seasons. That includes work with running backs like Fred Taylor, Julius Jones, Jamal Lewis, Shonn Greene and LeSean McCoy.

Pros: "Continuity" has been a Bills' buzzword lately, and promoting from within would certainly keep the Bills on the same page moving forward. The offense has done well under Lynn, players enjoy playing for him, and if the team feels it's on the verge of a playoff berth, hiring Lynn would say the Bills want to go for it, especially while they're getting high production from veteran stars like Kyle Williams and LeSean McCoy. It could also be an indication they'll keep quarterback Tyrod Taylor around, since Lynn likes him and he would give the Bills the best chance to win next season, though someone else might be better in the long run.

Cons: As a counterpoint to continuity, some might say: continuity of what? The Patriots, who have won an NFL-record eight straight division titles, want continuity. All the Bills have done is miss the playoffs 17 years in a row; blow it up! Lynn seems unlikely to be the coach if the Bills decide to go through a rebuild. Some fans would also say that if keeping Lynn means keeping Taylor, that goes in the cons column as well. Other candidates also have more experience than Lynn, who has only been a coordinator for 13 games and an interim head coach for one.

Fun fact: Lynn’s son, D’Anton, is a Bills coach, too. He played cornerback at Penn State and now works as a defensive assistant with the Bills. The Jets signed D’Anton as an undrafted free agent out of college and he also spent time with the CFL’s Hamilton Tiger-Cats.

Quotable: “He makes everybody accountable. He’s that leader, that type of coach we need," McCoy said of Lynn during locker cleanout. "A lot of players like playing for him, (including) myself. When I first got here as a running back and I found out he’s my coach, dealing with him on a day-to-day basis, I fell in love with him. So I’m actually excited that he’s up for the job. And we’ll see. Hopefully he gets it.”

Other head coaching interviews: Lynn interviewed with the 49ers on Wednesday and will reportedly meet with the Rams and Jaguars as well.