The dreaded combination of wind and rain in January usually spells turbid conditions in the river system. When the water is stained, shore fishermen can sometimes out-fish the boat fleet by focusing on the clearer water along the shoreline. Ricardo Davila of Wheatfield was out Tuesday morning and managed to reel in a few lake trout by casting brightly-colored chartreuse spinners and spoons. Yes, lake trout season is now open in the lower Niagara and they are fair game if you want to target them. He found some cleaner water above the power plant. Steelhead fishing has been a bit tough with the muddy water. Chris Reisch of West Seneca put his time in along Artpark casting a classic Dardevle red-and-white spoon to take a 30-inch steelhead on Tuesday morning in the rain. Boat fishermen were struggling a bit. Capt. Ryan Shea of Tonawanda took a steelhead on an orange salmon cluster and Chuck Yauch of Getzville hooked up with a laker on a jig – both in Devil’s Hole on Tuesday. Water conditions actually improved by the end of the day. How much the wind and rain will affect the rest of the week and the coming weekend is still up in the air, but with colder weather in the forecast, it could take an extra day or two for things to settle. Mark your calendars for the Roger Tobey Memorial Steelhead contest, set for Feb. 4 and hosted by the Niagara River Anglers Association. Check out Scattershot for information this week.

Ken Jackson of Sanborn reported some excellent stream fishing along the 18 Mile Creek near Hamburg. He was using egg sacs to take steelhead up to 10 pounds on Monday. Capt. Ryan Shea of Tonawanda with Brookdog Fishing Company agreed that 18 Mile was the biggest trout producer for some recent filming he was involved with. Egg flies and swung streamers attracted the most hits. He found many of the other tributaries were not worth the effort and Cattaraugus Creek was already too high and muddy following the rain. Weather forecast does 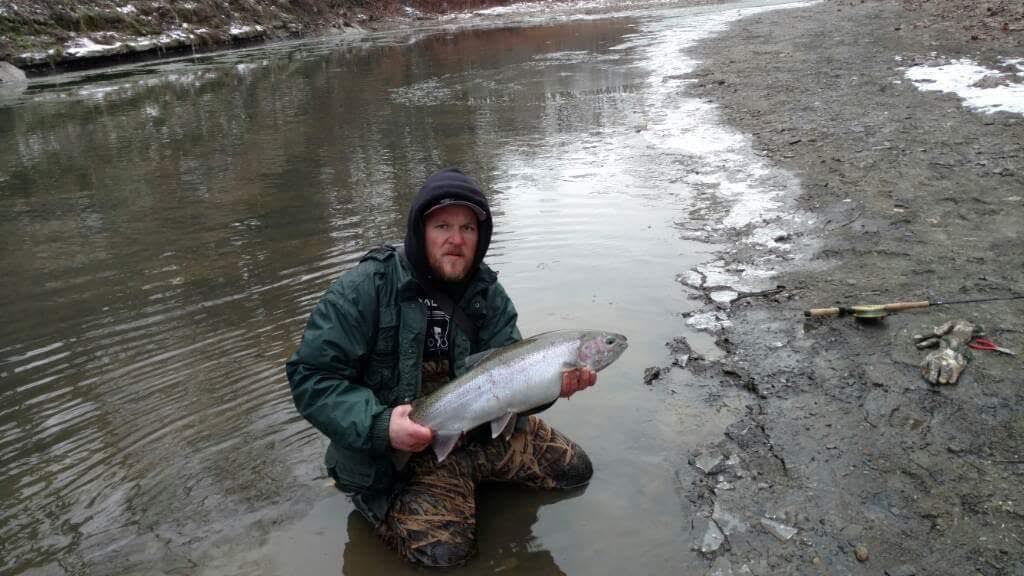 Ken Jackson of Sanborn shows off a nice 10-pound steelie from 18 Mile Creek off Lake Erie near Hamburg. He was using an egg sac.

not look good moving forward this week with lake-effect snow being forecast south of Buffalo and into the Southern Tier – up to a foot! Speaking of 18 Mile Creek earlier, a plea went out from the Fishing Nerds facebook page through AE Outdoors making anglers aware of a missing Orvis rod and reel. Robert Zorn lost it while rescuing his dog this week. The location was along one of the walls about two bends up from the Thruway Bridge. Contact Fishing Nerds or AE Outdoors if you find it.

Burt Dam and 18 Mile Creek were yielding some nice steelhead as the New Year rang in. Conditions were low and slightly stained, but following the rain it was starting to muddy up according to Ken Jackson of Sanborn. Stained conditions made for tough fishing. Use brightly colored baits such as chartreuse and orange jigs, tipped with a wax worm and fished under a float. Additional flow in the stream should pull some more fish in. Wes Walker at The Slippery Sinker in Olcott reported a few fresh salmon – kings and Cohos – at the dam early in the week. A few boats have been working the creek and the lake. Lake temperature is still 40 degrees. Over in the Oak Orchard River, Mike Waterhouse of Orleans County Tourism reports good fishing for steelhead and a fair number of Atlantic salmon also being reported in the system. Wooly buggers, streamers, egg flies and worms are working to take fish, depending on who you talk to.

There are very shaky ice conditions for the lake according to Craig Robbins of Jamestown. Before the rain and warm weather, there was 3 inches of ice at best in the south basin of the lake and around Long Point – not enough. Cold weather is arriving this week and Chautauqua is in the lake effect footprint. We’ll have to wait and see what happens. 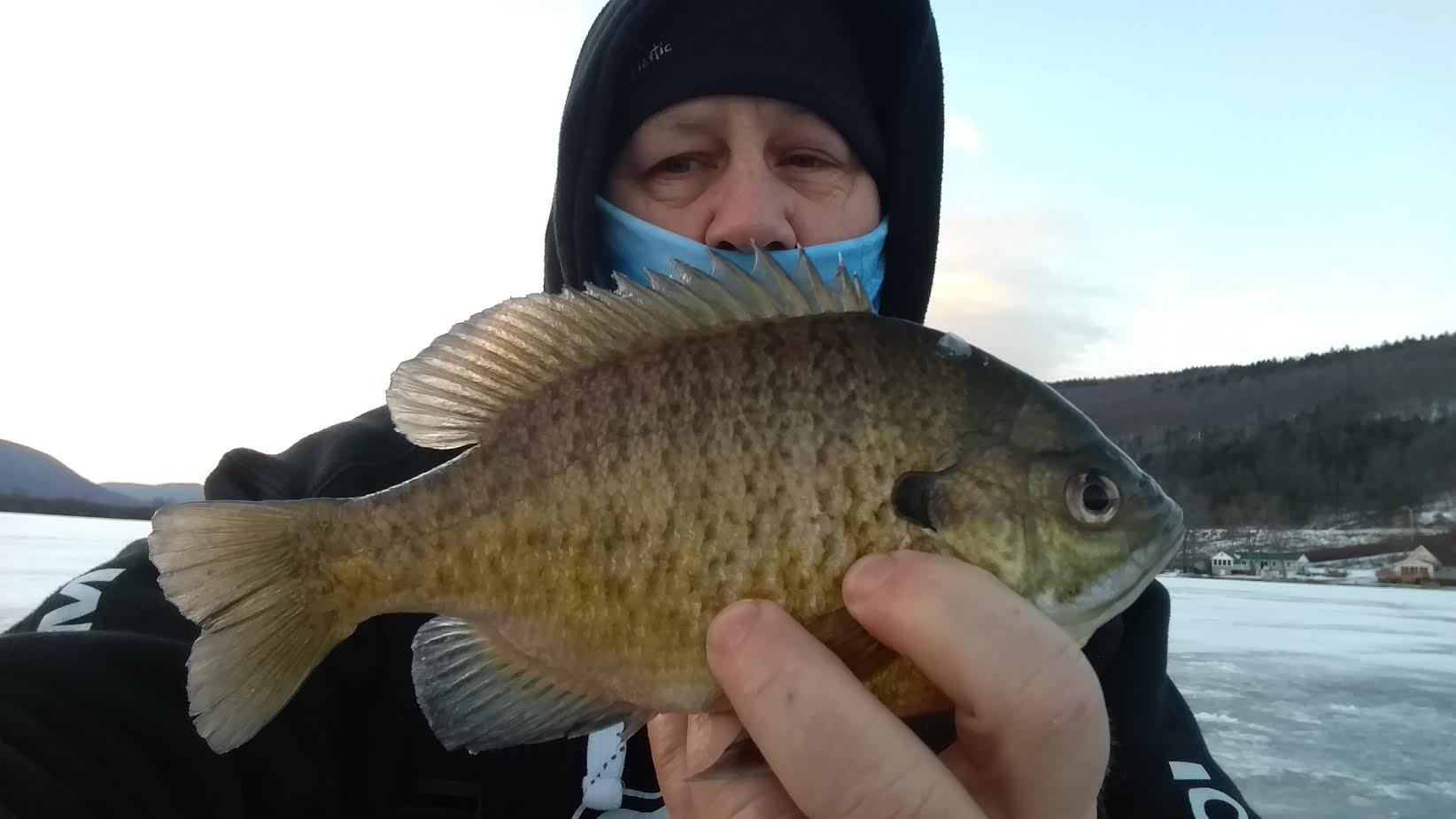 Recent rains and warm temperatures have certainly impacted ice conditions. There is no way of predicting what the one-two punch will do to the ice. However, a cold weather blast will be arriving on the scene this week and it will be just what the ice doctor ordered moving forward. Just before the rain, there were still a few spots that seemed to be holding on. New York Ice Team Pro Scott Brauer of Gasport reported that the ice was still holding at the south end of Honeoye Lake. Bluegills action has been good to very good with black a hot color. Spikes and wax worms are working well. Use a slow jigging motion. Perch had been hitting red. Deeper ice will be unsafe and we may lose the shore ice there so caution is advised. We’ll probably lose Silver Lake in the rain. Loon Lake may hold on until the cold. Red House and Quaker lakes were both fishable before the rain. According to Brauer, the rain will probably help the slushy lakes; hurt the solid lakes temporarily.  Brauer is one of the featured speakers at the Northeast Region Ice (Fishing) Jam Jan. 20-22 at the Conference and Event Center Niagara Falls. Check it out at www.niagarafishingexpo.com. Clam Outdoors and Thorne Brothers head the list of top exhibitors.