The first meeting to discuss a Green Code for Buffalo was held more than six years ago in what is now called One Seneca Tower.

On Tuesday – after 242 public meetings across the city – Mayor Byron W. Brown went to the downtown skyscraper's 24th floor to sign the Green Code into law – the first comprehensive overhaul of the city's zoning code since 1953.

"This is now the new development DNA of the City of Buffalo," the mayor said.

"This document represents the best ideas we have gotten from members of the community all across Buffalo," Brown said. "It creates modern development standards, and represents and builds upon Buffalo's strength as a great 21st-century city that can compete, head to head, with any other city in this nation."

The Council unanimously approved the Unified Development Ordinance a week ago. With the new zoning code and land use plan, Buffalo becomes the third major United States city to adopt a form-based code for the entire city, joining Miami and Denver.

"With an increase in city living, the new urbanism has taken on added significance in Buffalo, where the emphasis is on renewal, rehabilitation, repurposing and revival," Brown said. "The Green Code, which takes effect in February, will greatly assist in the city's transformation."

Council President Darius Pridgen praised the mayor for initiating the changes, and for the public inclusiveness of the process.

The effort for a new zoning code started 10 years ago with the New Millennium Group and a conference sponsored by its Smart Growth Committee. 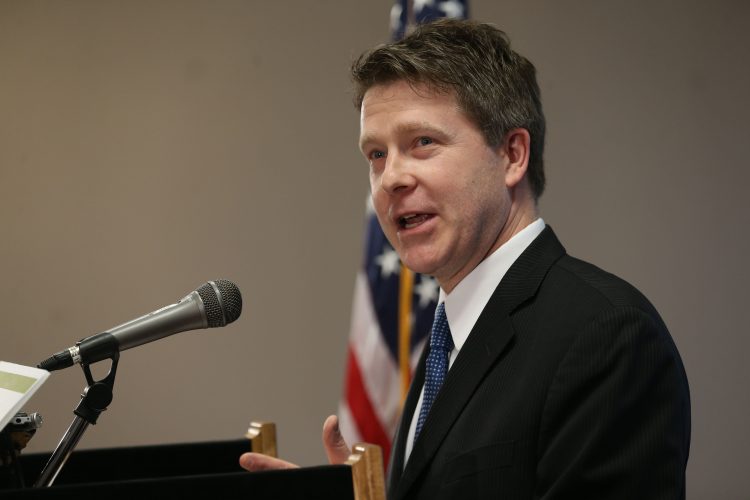 Brendan Mehaffey, executive director of the mayor's Office of Strategic Planning, speaks prior to the signing of the Green Code. (Sharon Cantillon/Buffalo News)

Brendan R. Mehaffy, executive director of the Office of Strategic Planning, recalled the group's efforts over the years.

"Fortunately, all those individuals found a very receptive audience in the mayor's office, and the mayor heeded that call for a dramatic transformation in the way we do zoning in the city of Buffalo," Mehaffy said.

Chris Hawley, who had been a New Millennium Group member, was instrumental as a city employee in writing the new city code.

Mehaffy also recalled the extensive outreach to the public.

"Meetings don't just happen," Mehaffy said. "You don't just open a meeting and then things go as planned. You have to design it. We didn't want to just hear the 10 loudest voices – we wanted to hear everybody."

Mehaffy thanked his staff, various city departments, consultants and citizens for getting the "enormous undertaking" past the finish line. He said some proposed changes still remain to be addressed, including a more inclusive housing strategy, a homestead law and a preservation plan.

Mehaffy also said nuances in proposed developments – such as building materials or a building's height – require the public to remain involved.

“It’s important to understand that even with all of the public engagement we have had with the Green Code, the public needs to stay engaged with projects as they go forward,” Mehaffy said.