While it must bolster Jim Kelly's ego to know he has been irreplaceable for 20 years, he'd rather watch another quarterback take his Buffalo Bills back to the playoffs.

Snow falling on a frigid January afternoon, a miserable opponent and Bills fans going bonkers for their boys ...

"Everybody wants it," Kelly said. "We've been waiting for a long time. Even though we're not out of it yet, you crave games in January. You want them here."

Remember when the Bills and Miami Dolphins were a marquee matchup? When Kelly and Dan Marino sprayed bullets all over the field? When the AFC East stakes were high?

The Bills head into Saturday's game at New Era Field on the brink of officially being eliminated from the playoffs for a 17th straight year and a grim outlook at quarterback.

Tyrod Taylor, the Bills' 15th starting quarterback since Kelly retired, has a contract option that would pay him $30.75 million in guarantees if the club wants him. Backup quarterback EJ Manuel's rookie contract is up.

That could leave only rookie Cardale Jones on the roster. The fourth-round pick hasn't dressed all year. He started only 11 games and threw 270 passes at Ohio State.

Kelly, employed by the Bills as an ambassador, declined to discuss the quarterback situation. But he acknowledged the pain of not experiencing a playoff atmosphere that used to feel mandatory.

"My daughter Erin is 21, and my daughter Camryn is 17," Kelly said. "They're diehards, the biggest Bills fans I know, but they've never seen a playoff game before."

Unearthing a franchise quarterback has been Buffalo's biggest issue for two decades.

Buffalo has not been alone, but the group is small.

Ryan Tannehill is Miami's 17th starting quarterback since Marino retired. Tannehill is recovering from a knee injury and will not play Saturday, but he emerged this year as worthy of the "franchise" mantle.

The Bills, meanwhile, continue to search. They seldom draft quarterbacks and have failed to develop any.

When it comes to identifying a franchise quarterback, Buffalo has no more clarity than when it named Buddy Nix general manager in 2010 and hired Doug Whaley as his heir.

Whaley came aboard as pro personnel director, was promoted to player personnel director a year later and became general manager after the 2013 draft. The Bills' media guide says Whaley has "played an integral role in all of the team's key personnel decisions since joining the organization."

No position is more key than quarterback. But in Whaley's time, the Bills have drafted only three.

Two of them – 2010 seventh-rounder Levi Brown, who made it into one NFL game, and 2016 fourth-rounder Cardale Jones – were drafted as long-term projects.

The Bills never had selected a quarterback with their first selection until 2013, when they traded back in the order and took Manuel 16th overall. The Bills gave Manuel the job as a rookie, but he quickly exhausted former coach Doug Marrone's confidence. Manuel has started 16 games over four pro seasons.

The Bills have tried every method for finding a quarterback during the playoff drought, although they've only dabbled in the safest way.

"The only sure way to find a quarterback is at the top of the class and then coach him up," agent Leigh Steinberg said. "They don't all work, but that's the surest place. Anything after that is a gamble."

Of the 14 Bills quarterbacks to start since 2000, only three (J.P. Losman, Trent Edwards, Manuel) were drafted. Eight were free agents. Three were acquired in trades. 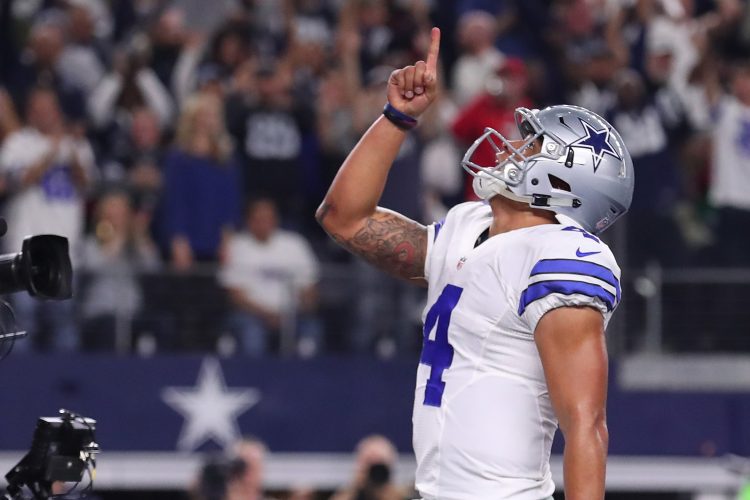 The Dallas Cowboys are headed to the playoffs with rookie Dak Prescott, the 135th overall selection. The Cowboys settled for him after missing out on Lynch and Connor Cook, taken earlier in the fourth.

The Bills might've had a shot at Prescott, but they traded the 114th pick and next year's fourth-round choice to move up eight spots for linebacker Reggie Ragland.

The Seattle Seahawks won a Super Bowl with their surprise discovery, 2012 third-round pick Russell Wilson. The Seahawks already had signed Matt Flynn to a big free-agent deal and had incumbent starter Tarvaris Jackson, but Wilson wowed them in camp.

While the quarterback supply doesn't meet NFL demand, 12 clubs have found their franchise guy since 2010, and eight were available to the Bills either on the market or on the draft board.

College quarterbacks are tricky to evaluate. They usually come to the NFL unprepared for pro-style quarterbacking. They amass boffo numbers in air-raid offenses.

"The player fits into the coach's offense instead of the offense fitting around the quarterback's skills."

After the snap, usually out of the shotgun, which leaves them with sloppy footwork on the NFL's five- and seven-step drops, college quarterbacks are reading one or two defenders and making an automated throw.

"When he gets up to the big leagues, it's a totally different game," said Gabriel, a 30-year scouting veteran and owner of two Super Bowl rings with the New York Giants.

Accuracy in small windows, limiting the chance for interceptions and giving the receiver a chance to run after the catch, are paramount. But completion percentages often should be ignored as college schemes may emphasize shorter throws and checkdowns.

Gabriel was a consultant for the Philadelphia Eagles in 2013, the year the Bills drafted Manuel. Gabriel charted seven Florida State games from Manuel's senior season and said Manuel might have thrown to the opposite side of the field five times. Gabriel said he gave Manuel a third-round grade. 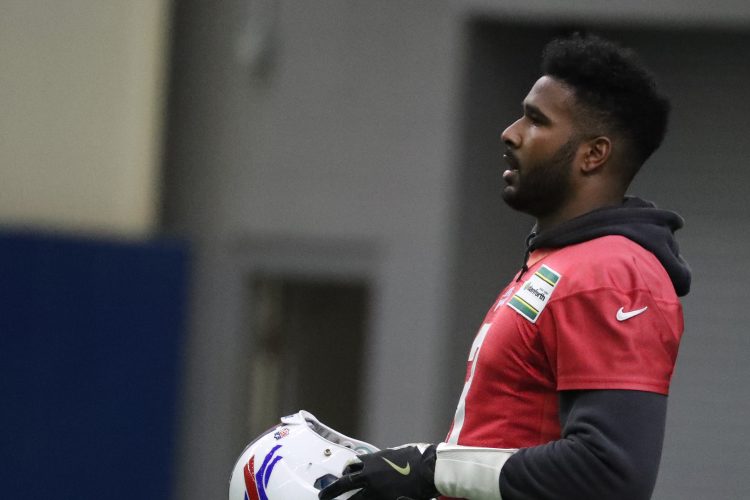 Just seven months ago at Bills rookie camp, Jones had to be taught how to take a direct snap from the center.

Another problem for development is the salary cap. It prevents teams from investing in the old veteran-understudy approach.

Patience in a win-now environment is thin from the beginning. The pressure to perform – top picks go to the worst teams by design – often erodes confidence and obliterates the learning curve.

"It stuns me," Steinberg said, "that teams would package a load of picks to move up to draft a quarterback and put a rookie behind a makeshift offensive line and not give him the weapons he needs.

"Then you develop a crisis of confidence within the quarterback and a crisis of belief in him from his teammates."

Buffalo appears farther away from finding a franchise quarterback than in 2001, when a broken collarbone sidelined Rob Johnson and forced Alex Van Pelt to start eight games.

The Bills solved their problem in the offseason, trading for Bledsoe, the veteran who had been supplanted in New England by Tom Brady.

Bledsoe was a big name, but in actuality a three-year stopgap until Losman, the 2004 first-round pick, took over. That was the last time the Bills had a highly experienced starter with an obvious understudy backup.

"The prudent method necessary to developing quarterbacks," Steinberg said, "has been disrupted."

Many forget the Cowboys lost all 11 games Aikman started as a rookie. They went 14-24 through his first three seasons.

Prescott has been phenomenal this year and mentioned as an MVP candidate. The Cowboys are 12-2.

Yet after a shaky game two weeks ago against the Giants, talking heads debated whether it was time for veteran Tony Romo to get the job back.

"We used to judge quarterbacks by their third year," Steinberg said. "Now it's immediate, with endless web sites and talk radio and gambling and fantasy leagues and 24/7 content. The public demands instant performance.

"Two games into a quarterback's first year he's a bust, and it destroys confidence. We used to all understand that bringing along a quarterback took a couple years."

During what soon will be officially stamped a 17-year postseason famine – longest in the four major North American sports – Buffalo's drafted quarterbacks haven't started more than Losman's 33 games, a shade over two year's worth of work.

One can argue the closest Buffalo has come to finding a franchise quarterback was Ryan Fitzpatrick, originally signed to be Edwards' backup. Fitzpatrick eventually started 53 games, which would be 3.31 NFL seasons, most during the playoff drought.

Where they are headed at quarterback now seems a mystery.

"It's a delicate process," Steinberg said. "Done correctly, you give yourself a chance to go to the playoffs and the Super Bowl endlessly.

"That's the difference in the maturity in some franchises."

The Buffalo News has sorted each of the NFL's 32 franchise-quarterback situations into three categories: found, learning or searching.

Twenty-two clubs either went into 2016 with a franchise QB or determined this year they have one. A few teams such as the Arizona Cardinals and Chicago Bears might very well be on lookout again in 2017, but their guy was in place this year.

Of those 22 "found" situations, 12 were attained in the nearly seven years since Buddy Nix and Doug Whaley took over Buffalo's football operations. And of those dozen quarterbacks, eight were available to Buffalo where they picked in the draft or were on the market.

Fifteen teams since 2010 have drafted quarterbacks they already consider franchise guys or, for teams such as the Los Angeles Rams and Philadelphia Eagles, believe will be.

Sixteen clubs have drafted fewer quarterbacks than Buffalo has since 2010. But nine already had a franchise quarterback in place.

Arizona Cardinals: Carson Palmer and a seventh-round pick came from the Raiders in 2013 for two sixth-round draft picks.

Cincinnati Bengals: Andy Dalton was the 35th pick in 2011, one slot after the Bills drafted defensive back Aaron Williams.

Dallas Cowboys: Undrafted Tony Romo's 10th season as Dallas' starter ended with a back injury. Dak Prescott, the 135th pick, has been a star rookie. Buffalo, having traded its 49th pick, 114th pick and next year's fourth-rounder to move up eight spots in the second round for linebacker Reggie Ragland, took Jones four slots after Dallas took Prescott.

Green Bay Packers: Aaron Rodgers was the 24th selection in 2005. The Bills would have picked 20th had they not traded their pick a year earlier to move up for J.P. Losman.

Kansas City Chiefs: Alex Smith was acquired from the 49ers for a 2013 second-round draft choice and a 2014 third-round pick.

Miami Dolphins: Ryan Tannehill was the eighth pick of 2012.

New England Patriots: Tom Brady is an outlier even among the legends, drafted with the 199th selection in 2000.

San Diego Chargers: The Giants drafted Philip Rivers fourth overall in 2004 and sent him to the Giants in the Eli Manning trade.

Seattle Seahawks: Russell Wilson was the 75th choice in 2012 even though the Seahawks a month earlier signed free agent Matt Flynn to be their starter. The Bills traded up to 69th to select receiver T.J. Graham.

Washington: Kirk Cousins was taken in the fourth round even though Washington drafted Robert Griffin second overall.

Los Angeles Rams: A trade with the Titans allowed the Rams to draft Jared Goff first overall this year.

Philadelphia Eagles: A trade with the Browns allowed the Eagles to select Carson Wentz second overall this year.

Buffalo Bills: Tyrod Taylor might be playing his last two games for Buffalo, and E.J. Manuel's contract is up.

Cleveland Browns: Five quarterbacks have played for winless Cleveland this year. Cody Kessler was a third-rounder this year.

San Francisco 49ers: Colin Kaepernick has been a worthwhile miss, helping the Niners reach the Super Bowl four years ago.