LOCKPORT – Matthew A. Jurado, the former North Tonawanda firefighter accused of setting a fire in the home of the city's only African-American firefighter, pleaded not guilty to an arson indictment Thursday.

Jurado, 40, appeared in Niagara County Court, where Judge Matthew J. Murphy III kept him free on a $50,000 bail bond he posted after being arraigned in North Tonawanda City Court Aug. 5.

In an interview with police Aug. 4, Jurado confessed to igniting a bottle of lighter fluid on the couch in the apartment of Kenneth D. Walker during the noon hour on Aug. 3.

Although Walker had received a racist, threatening note two days earlier, Jurado told police his motives were not racial. He said he was angry over being kicked out of a North Tonawanda fire company and Walker's inability to get Jurado into another fire company in the city's hybrid system of paid and volunteer firefighters.

The men lived across the street from each other on Oliver Street in North Tonawanda, and Walker knew Jurado well enough to phone him and ask him to check on his apartment, because Walker's wife thought she had forgotten to lock it when they left that morning. According to police reports, that's when Jurado went in and set the fire.

Thursday, Murphy issued an order of protection barring Jurado from having any contact with Walker or his wife. 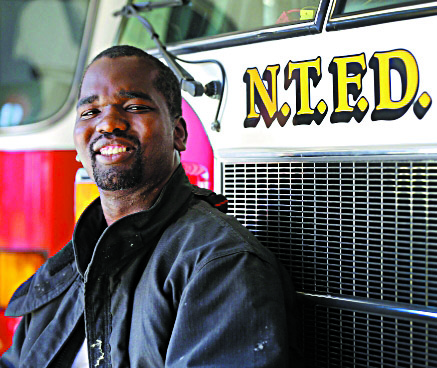 Walker received an outpouring of public support after the fire and was swamped with donated goods, while an online fund-raising effort started by a Wheatfield volunteer firefighter brought him more than $150,000. In an Aug. 19 interview with The Buffalo News, Walker said he intended to buy a house.

Other than giving his address and confirming that he is a U.S. citizen, Jurado said nothing during the arraignment. He was represented by Assistant Public Defender Charles F. Pitarresi. Murphy scheduled a pretrial conference for Jan. 26 and a trial date of April 24.

The only count in the grand jury indictment is second-degree arson, the same charge police originally laid against Jurado. It is a Class B felony that carries a mandatory state prison sentence if Jurado is convicted of that charge, with a minimum five-year sentence. The maximum is 25 years.

Neither Jurado nor anyone else has been charged with writing the racist letter to Walker. Hoffmann said that investigation remains open. Police searched Jurado's home and questioned his girlfriend about their computer use in an apparent effort to find evidence in that matter.

In his Aug. 4 interview with police, a tape of which was provided to the defense Thursday, Jurado said he started the fire because he was angry about being suspended from the Fire Department. Jurado was ousted from Live Hose Company in July for failure to complete training, according to a statement to police by firefighter Kenneth J. Kozlowski, president of the city Firefighters Association. Walker was a member of Gratwick Hose Company.

"OK, I’ll tell you the truth. It wasn’t racial, nothing like that," Jurado told police, according to a court document. "I was pissed about the Fire Department. They kicked me out and Ken said I couldn't get into his (fire company) because all the departments were connected. I went in the back door, it wasn’t locked. I put a little plastic bottle full of liquid on the couch and lit it. It was filled with Zippo lighter fluid and I lit it with a regular lighter. I left and walked back across the street."

It was a different version of events from the one Jurado gave police the day of the fire.

In Jurado’s first statement to police, taken less than two hours after the fire was reported at 12:36 p.m. Aug. 3, he claimed that he saw smoke coming from Walker’s residence as he was on his way over to check whether the door was locked. Jurado speculated that it might have started "through an AC unit or electrical. I heard the smoke detectors too, so I knew."

Asked then by Detective Timothy P. Bakula whether he had any hard feelings about being suspended from the Fire Department after 3 1/2 years of service, Jurado replied, "No, I don’t."

Walker’s statement to police cited a July 13 exchange of text messages in which Walker agreed to try to obtain a Gratwick Hose application for Jurado. However, Walker said he texted Jurado on July 22, "I can’t get you an app. Our president met with (Assistant Fire) Chief (Douglas D.) Orlowski about you and they won’t let you join after what happened. You can’t even join as a social member."

Walker said Jurado sent him several texts after July 22, but he didn’t return any of them. He said he never told Jurado about the threatening note he found in his mailbox Aug. 1, saying that their relationship was reduced to saying "Hi" when they saw each other.