When the carousel horses are ready to kick up their heels in a new solar-powered merry-go-round building in Canalside, they'll have Gov. Andrew M. Cuomo – and KeyBank – to thank.

KeyBank announced Thursday it will match the governor's $1.2 million state challenge grant, posed in October, to construct a building for the vintage 1924 carousel made once upon a time by Spillman Engineering Company in North Tonawanda.

The building will also include the bank's name.

"When we heard Gov. Cuomo's challenge asking for a match for the New York State grant for the Buffalo Heritage Carousel, we knew we wanted to be involved in bringing this worthwhile, family-oriented project to Canalside," said Gary Quenneville, region executive for KeyBank. "Partnering with the First Niagara Foundation, KeyBank is proud to answer the governor's call."

Lt. Gov. Kathy Hochul confided her love of carousels to an enthusiastic audience of young children in the Boys and Girls Clubs of Buffalo at the William Baird Clubhouse on the East Side, while also expressing thanks to the bank.

"I have a confession to make. I go on every carousel in every town I go to – I truly love carousels," Hochul said. 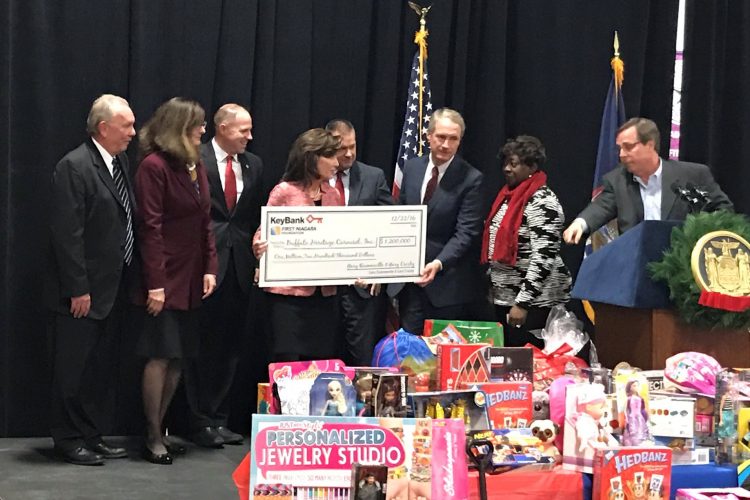 Lt. Gov. Kathy Hochul holds a check from KeyBank that will contribute to the Canalside carousel. (Mark Sommer/Buffalo News)

The donation brings the total pledged to the Buffalo carousel to $3.4 million, and the capital campaign 25 percent closer to its $4.8 million fundraising goal.

"I'm very confident the community will come forward to raise the balance of $1.4 million," said Corky Burger, capital campaign director. "I've been in contact with many corporations and foundations and received great responses."

"This is a tremendous boost to our campaign effort to bring this historic carousel home to Buffalo to be enjoyed by the community for decades to come," said Laurie Hauer-LaDuca, Buffalo Heritage Carousel's president.

"This vintage wood-carved carousel will be a musical, whirling, gleaming example of art in motion year-round, and a treasure for future generations," said Hauer-LaDuca.

Contributions to the Canalside carousel:

Buffalo Heritage Carousel has also chosen eco_logic STUDIO, an architectural firm headed by Kevin Connors and David DeBoy, to design the carousel house. The group sent a request for proposals to nine local architectural firms before making the decision.

Restoration of the carousel, which has sat in storage in Massachusetts and Ohio since 1956, is expected to begin in February and take 15 to 18 months.

Installation is expected in summer 2018.

The 28 horses, six menagerie figures and three chariots will comprise 37 items on the three-row carousel, along with painted scenery panels. 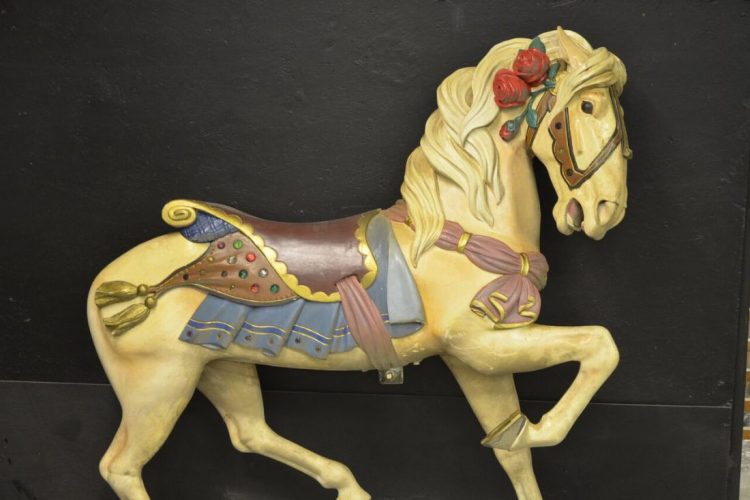 This horse, which has roses in its mane, was restored in the 1980s for Antoinette De Angelis, whose family owned the carousel for 92 years, the last 60 in storage. (Photo courtesy of Carousel Works)

A recently purchased vintage 1916 Herschell-Spillman mule will be restored as A Mule Named Sal. Also, a new, handicapped-accessible Erie Canal barge chariot will be included.

Assemblyman Sean Ryan, D-Buffalo, made a low-cost ride a stipulation of a $600,000 grant he secured last year to finance the carousel's restoration.

"I'm going to tell you my favorite thing about the carousel," Ryan told the children Thursday. "It's only going to cost $1 to ride it. That means anyone from the City of Buffalo will be able to put together $1 to take a ride."