To call the recently opened restaurant at the northeast corner of Allen Street and Delaware Avenue the “new” Colter Bay suggests that it has something in common with its predecessor beyond its name. But the truth is, Colter Bay as it stands today has retained little of its “old” incarnation beyond the front door signage and prime Allentown location. And that’s a good thing.

That Colter Bay has entered a new distinct era under the direction of co-owners Mike Shatzel and Tony Martina is immediately evident from a spatial perspective. Where there was once a cramped, u-shaped bar and a separate back dining room, there is now a welcoming, open layout. And where branded tap handles once constituted a major design element, there are now whimsical nods to ski lodge culture, burnished gold bar stools, a fleet of 44 minimalist beer taps and copper-finished architectural details. The result is a sleek, warm and distinctly handsome space offering a pleasant reprieve from the recent bout of winter weather.

Food-wise, the departure from the former restaurant is equally apparent. In fact, if one were to liken the fare to any defunct Buffalo restaurant, it would be to Blue Monk, where Martina was previously chef.

Echoes of the Blue Monk menu are rampant: pierogi, macaroni and cheese and Breadhive soft pretzels are on the menu, as are fish and chips and a selection of hearty burgers and sandwiches. And like Blue Monk, there is no shortage of aioli, braised short rib, bacon, and caramelized onion accoutrements. But there also are notable differences. Where Blue Monk had a Belgian influence replete with multiple variations of moules-frites, Colter Bay pays homage to the seafood and wild game of the American West. Rainbow trout, elk and bison are all on the menu. 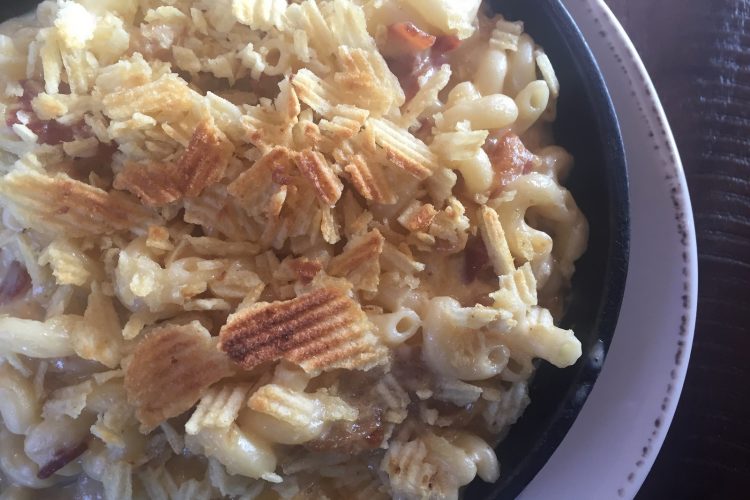 The macaroni and cheese at Colter Bay. (Photo by Caitlin Hartney)

We opted for a generously portioned starter of macaroni and cheese ($11), which tasted far better than my mediocre photograph suggests. Creamy and abounding with Applewood smoked bacon and those subtly sweet caramelized onions Martina is so fond of, it was a devilish way to start a midday meal. A potato chip topping didn’t add much in terms of flavor or texture though, leading me to muse that a buttery, herbed breadcrumb might improve the dish as would proper serving temperature. Despite being presented in cast iron, suggesting it came straight from the oven, the macaroni arrived at our table just a touch warmer than room temperature. But these were minor quibbles that didn’t preclude us from reaching for forkfuls long after we were satiated by our entrées.

And quickly satiated we were. The Split Rock burger ($15)  featured a beef patty topped with more of those jammy onions, braised short rib, cheddar cheese and arugula. An advertised horseradish-black pepper aioli lacked heat, but to no great detriment. It was a satisfyingly unctuous affair made even better by a side of perfectly crisp, salty hand-cut fries. They were reminiscent of the ones Blue Monk served to great fanfare. 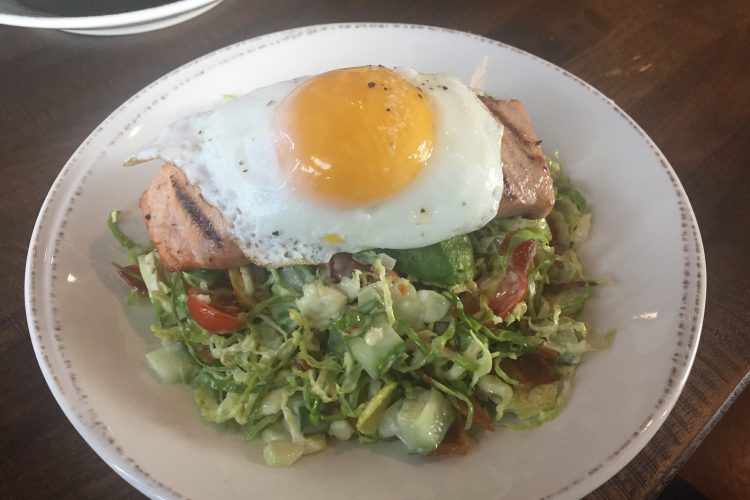 The grilled salmon chopped salad is a good selection for those looking for a healthy meal. (Photo by Caitlin Hartney.)

For guests determined to eat something green, Colter Bay has options. A grilled salmon chopped salad ($15) of shaved Brussels sprouts, cucumber, grape tomatoes, red onion, bacon, and avocado, topped with a fried egg, is one of them. Its creamy lemon vinaigrette and perfectly runny egg yolk tempered the harsh bite of the raw cruciferous vegetable. The was flaky and generously seasoned, even if it could have spent a touch less time on the grill.

No doubt, I will make a repeat visit. But if you are wistful for the former Colter Bay, Shatzel and Martina’s elevated concept might offend your memories. If you continue to mourn the loss of Blue Monk, this new Colter Bay might just assuage some of your grief. If you don't fall into either of those camps, you’ll simply appreciate the inviting atmosphere, friendly and attentive service, and hearty, beer-friendly food.