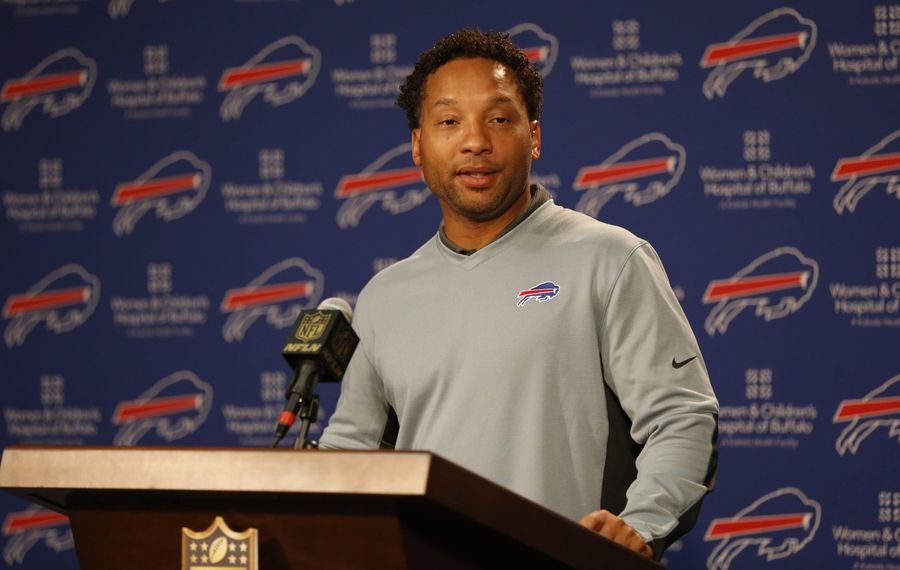 The story declared Whaley was "awfully close" to "building a roster that can perennially compete for the postseason and championships."

An examination of all 32 NFL rosters reveals Whaley has constructed the Bills in contradictory fashion, relying on more free agents than any other club while failing to unearth a franchise quarterback since joining the front office.

The Bills are on the verge of extending the NFL's longest playoff drought to 17 years. Reports claim management will fire coach Rex Ryan after two seasons. The Bills aren't expected to retain quarterback Tyrod Taylor.

The reports also say Whaley likely will remain GM for a fifth season. He has become a curious figure, a favorite of owner Terry Pegula in an organization where credit flows freely, but accountability often is escapable.

A league-wide roster analysis shows perennial playoff teams have an average 61.1 percent more draft picks on their rosters than the Bills are carrying.

The Bills have 22 of their own draft picks on the active roster and 31 overall when counting the practice squad and injured reserve.

Those are the lowest figures in the league and substantially behind teams that have made the playoffs within the past five years.

The winless Cleveland Browns, whom the Bills pushed around Sunday at New Era Field, are bottoming out on purpose. Yet the 7-7 Bills have fewer draft picks on their roster than the Browns do.

The Browns have 32 of their own draft picks. The Chicago Bears, with three victories, are next at 35 draftees.

The Carolina Panthers also have kept 35 draftees. The Panthers went to the Super Bowl last year, but they won't make the playoffs and are last in the NFC South, indicating how unsustainable it is to rely on free agency.

The New England Patriots, Pittsburgh Steelers and Green Bay Packers perennially hold later draft slots than most NFL teams; their talented rosters are difficult for rookies to crack. Yet they have gobs more draft picks on their rosters than the Bills do.

Eleven teams have reached the postseason at least three times within the past five years. They carry on average 50.3 players that they've drafted.

The Patriots have 40, the Steelers 45, the Packers 57. The Cincinnati Bengals rank second with 56 draftees in the organization.

Eleven teams have made the playoffs once or twice over the past five years. They average 45.8 of their own draft choices.

Buffalo is well off the pace even among the worst clubs.

The 10 teams that have failed to make the playoffs in any of the past five years average 37.7 draftees, 6.7 players more than the Bills have.

Some might wonder if Buffalo's total number of draftees at an NFL-low 40 percent of their roster can be blamed on previous personnel executives.

But other doormat franchises that recently underwent massive upheaval are on the cusp of the playoffs.

The Oakland Raiders' roster features 66 percent of their own draft choices, and they snapped the NFL's second-longest postseason slump Sunday. The Tennessee Titans and Tampa Bay Buccaneers have 51 percent apiece. The Miami Dolphins are at 48 percent.

The Detroit Lions are on their sixth general manager since the Bills' playoff drought began. They've overcome Matt Millen, their notoriously bad personnel executive from the 2000s, and wiped out their administration 13 months ago.

Even though star receiver Calvin Johnson retired, Detroit leads the rugged NFC North with a roster that has 58 percent homegrown players.

Of course, the amount of draftees doesn't matter if those players don't fill significant roles.

But since Whaley became assistant GM and pro personnel director in 2010 (he was promoted to player personnel director a year later) the Bills drafted 55 players, with 28 of them starting four or fewer games. They've found 24 draftees who've started at least 10 games.

Over the same period, the last eight Super Bowl champions – again, drafting later in the order and with rosters tougher to make – have drafted a similar number of starters.

In reverse order with the number of draftees who've started at least 10 games so far:

What all those teams have in common is a franchise quarterback who led them to Super Bowls.

Buffalo, meanwhile, is up against the salary cap without a Lombardi Trophy and is no closer to finding a franchise quarterback than when Whaley was hired in 2010 or when he was promoted to general manager after the 2013 draft.

In Whaley's time, the Bills have drafted three quarterbacks: 2010 seventh-rounder Levi Brown; 2013 first-rounder EJ Manuel (the only time in Bills history they took a quarterback with their first pick); 2016 fourth-rounder Cardale Jones.

The Patriots have drafted four quarterbacks in that span, and their job hasn't been open for 15 years. The Broncos have drafted five since 2010 – two first-rounders and another second-rounder – while also signing free agent Peyton Manning in 2012.

Accountability for drafting Manuel and then sticking with him has been tricky for Whaley, described in the Bills' media guide as someone who "joined the Bills in 2010 and has played an integral role in all of the team's key personnel decisions."

But when it comes to transactions made when Buddy Nix was GM and Whaley was his assistant, there's been a propensity to give Whaley credit for the hits and Nix blame for the misses.

For instance, Nix remained Buffalo's GM through the 2013 draft. They selected Manuel on April 25. They traded for outside linebacker Jerry Hughes on April 29. Nix didn't resign until May 13.

Nix has been on the hook for Manuel, who started one season and displeased former coach Doug Marrone so much the Bills signed Kyle Orton off the street eight days before the 2014 season opener.

But at a 2013 Bills draft party for season-ticket holders, Whaley gushed about the Manuel selection. Whaley said Manuel had "that it factor," that Manuel was "a leader of men."

"Is he going to be successful? Only time will tell," Whaley added. "But we're going to bet on all those factors above anything else. We think we've got a gem in this guy.

"In three years, maybe he's not, and then I'll be sitting there, saying, 'Guys? Anybody got a job for me?' "

Whaley's affinity for Manuel deterred Buffalo from drafting another quarterback for three years. Jones is considered a project and hasn't dressed for any games.

The Hughes deal was a coup. He recorded 20 sacks through his first two seasons with Buffalo. It became feathered into Whaley's narrative that he was responsible for acquiring Hughes.

At the Bills' 2013 postmortem press conference, President Russ Brandon praised Whaley for the "personnel brought in not only in the draft, but acquisitions like Jerry Hughes, Ty Powell, Stefan Charles and Dan Carpenter, a lot of players that contributed this year."

Love has been heaped on Whaley for the LeSean McCoy trade, although the offer fell in his lap while relaxing with the Pegulas and Ryan on the owners' yacht. Resurrecting guard Richie Incognito also was a nice stroke, although Ryan urged that signing.

Another factor possibly impacting the Bills' inability to pinpoint draft keepers is their approach to scouting underclassmen.

The process predates Whaley, but he has maintained an old-school organizational philosophy of not scouting underclassmen until they declare for the draft in January.

"I knew there used to be teams that did it that way," a longtime NFC scout told me. "I just thought they didn't exist anymore."

A decade ago, maybe 20 or 30 underclassmen would enter the draft. There were 96 underclassmen in last year's draft, and they heavily populate the early rounds. That trend also depletes the next year's senior class, making underclassmen the most critical group to evaluate each year.

Buffalo's first pick in each of the past three drafts was an underclassman. This year, they took three: edge rusher Shaq Lawson in the first round, Jones in the fourth and running back Jonathan Williams in the fifth.

Rules restrict NFL teams from interviewing and performing background checks on underclassmen or discussing them with anyone unless their colleges indicate they will enter the draft early.

NFL teams, however, are allowed to get a head start by grading game film and doing other research.

I reached out to eight NFL personnel executives to gauge how common the Bills' approach is. Two said they also wait until teams declare, but the other six said they don't delay.

"We start at the beginning of their junior years by identifying who might declare to come out," said another NFC personnel executive. "We used to wait, but there've been too many poor decisions made. You need ample time to research the players."

The Bills' roster will remain in flux this offseason. Partly because they rely on more free agents than any other club, the Bills lead the NFL in players on expiring contracts.

What happens to them if Buffalo's next coach flips to a 4-3 defense?

Furthermore, the two coaches hired while Whaley "played an integral role in all the team's key personnel decisions" butted heads with him.

Marrone when he was hired expected to have Ryan Fitzpatrick at quarterback and was frustrated by Whaley's decision to double down on Manuel and then trade an extra first-round pick for receiver Sammy Watkins.

Ryan and Whaley apparently haven't gotten along either. If BuffaloBills.com is to be believed, then Ryan bungled his implementation of Whaley's roster that was advertised as a perennial contender yet can't beat teams with winning records.

The blame-shifting storylines that emerge from One Bills Drive if Ryan gets fired likely will paint Whaley as merely carrying out Marrone's and Ryan's roster wishes. And maybe dump more blame on Nix.

Symbiosis is critical between a GM and coach, something unseen around these parts after Tom Donahoe and Mike Mularkey.

But when it comes to Whaley, it always seems to be somebody else's fault.