LOCKPORT - Isaiah 61, a faith-based job training program which tries to teach construction skills to young adults, is holding its first class in Lockport and hopes to renovate a house in the city soon.

The Niagara Falls-based program is holding sessions Monday through Friday on the third floor of Building 2 at Harrison Place, where eight young men are going through a 500-hour course of instruction in the various building trades.

Whether it's framing, drywall installation, carpentry, wiring, concrete work or plumbing, the course is designed to start the men on their way to professions that can be lucrative.

"If you like plumbing, it's lousy work at first, but once you get your master's license, you're a rich man," instructor Paul Crawford said,

That sounds good to Jeremy White, 29, of Ransomville. "I like doing it. I don't know why. Copper plumbing," he specified. "It's satisfying to me when I can make a joint seal like that."

"I've done roofing before," said Spencer Williams, 25, of Lockport, whose grandmother brought him an Isaiah 61 brochure from her church, Refuge Temple. "I was looking to learn more and get deeper into the trade, not only learning itself but how to deck and frame." 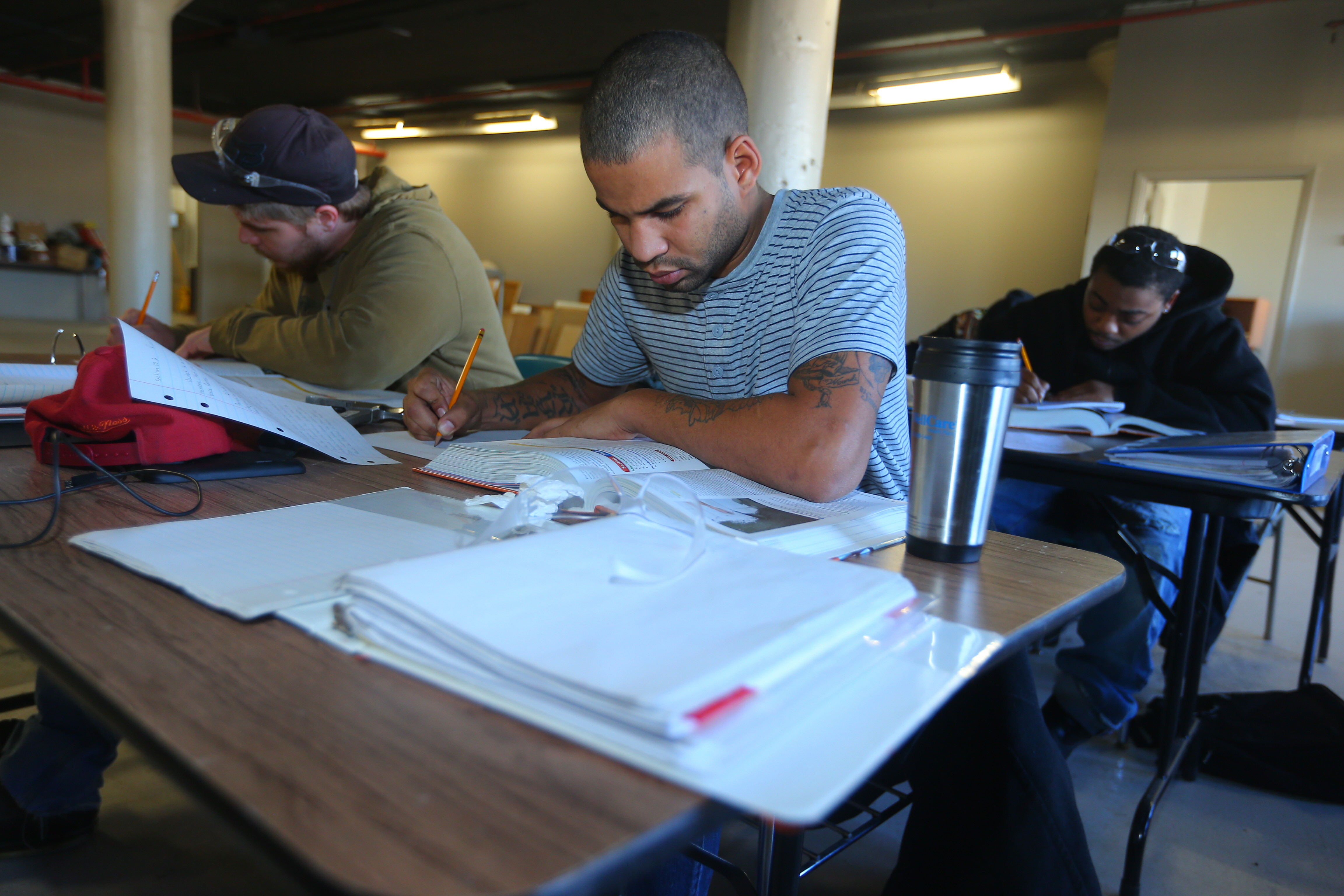 "Over the springtime, I helped my uncle drywall his whole house," said Ryan Person, 27, of Lockport. "I want to know everything. Eventually, I want to build a house from the ground up."

Rev. Kevin M. Wing, executive director, said Isaiah 61 has its eyes on a foreclosed house in the Locust Street-South Street area as its first Lockport project.

The plan is to buy that, fix it up, resell it and use the proceeds to buy another run-down house to repair.

"It's another tool in our tool box for dealing with our zombie house problem," Common Council President David R. Wohleben said.

Wing said his agency already has agreed on a purchase price for the first Lockport home, but it is testing the property for radon gas, asbestos and lead paint, all of which could sink the project financially.

"We have to make sure we're not buying something that'll bite us in the butt," said Wing, pastor of Niagara Falls' Destination Life Fellowship Church.

A radon problem could be fixed by resurfacing the basement floor, but for lead paint or asbestos remediation, professionals would have to called in. "That could be a deal killer. The costs can be staggering," Wing said.

But Isaiah 61 can walk away from the purchase if it has to. "There are plenty of houses," Wing said.

In Niagara Falls, Wing said, Isaiah 61 finished one house on Whitney Avenue, which is being leased with the intention of having the tenant buy it, and is nearing completion on a house on 16th Street. The organization already has bought its third house, on Memorial Parkway.

Isaiah 61 has had its struggles in Niagara Falls. The founder, James Haid, who once headed St. John the Baptist Outreach in Lockport, left as executive director in late 2014 for a job with a rescue mission in Utica, Wing said. Isaiah 61 was without an executive director for half a year, and Wing said, "The organization took a little bit of a dip."

For instance, the group got some bad publicity when a heavy snowfall collapsed the roof on the first house it tried to remodel, on Centre Avenue in the Falls. Wing said the workers actually were trying to shore up the roof, which was inadequately supported because of bad work by the original builders, but someone removed the supports and down it went.

The City of Niagara Falls is funding Isaiah 61 with $125,000 a year from a federal Community Development Block Grant, according to Seth A. Piccirillo, the Falls' community development director. Also, the city received a $132,000 state grant toward renovation of a former fire station on Highland Avenue, which would be a job training center for Isaiah 61 and other agencies. 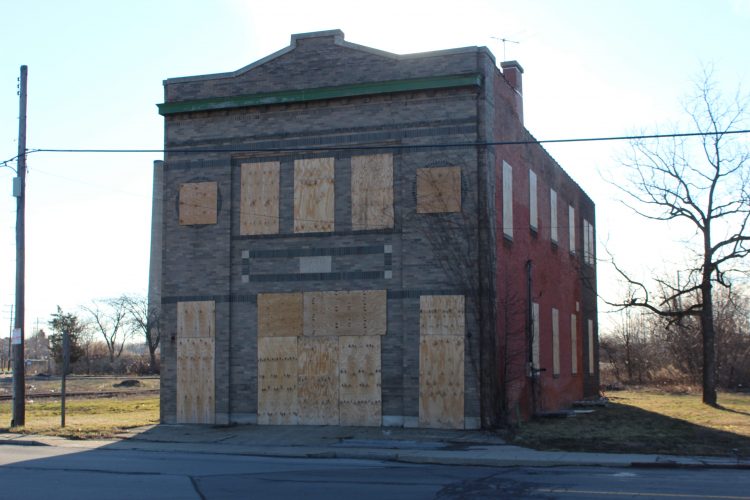 The former fire hall in Niagara Falls that will become a job training center for the Isaiah 61 program.

The city set up a budget for the work, which was not to exceed $500,000, and Piccirillo said Seneca Niagara Casino profits will be used to pay the amount the state grant doesn't cover.

The roof of the building has been replaced and asbestos removed, and Piccirillo said Niagara Falls is about to seek bids for the interior renovation, which is supposed to be done during the winter so the building can open next spring.

In the meantime, Isaiah 61's Niagara Falls classes are being held in the former Carborundum Co. building, now called the Niagara Business Center, at Buffalo Avenue and Portage Road.

The former fire station is accessible on a bus route and is located in Niagara Falls' poverty-stricken north end, while jobs programs at the Niagara County Community College campus or the Orleans-Niagara County Board of Cooperative Educational Services site, both in Sanborn, are a chore to reach for people without transportation.

Piccirillo said Isaiah 61 and the other agencies involved in jobs programs will pay rent at the former fire station.

In Lockport, Mayor Anne E. McCaffrey said the city is earmarking $6,000 of its block grant funding for Isaiah 61, while other grants to the organization have come from the Grigg-Lewis Foundation and Yahoo. "The funding was to get established," McCaffrey said.

Piccirillo said the city decided to scale back Isaiah 61's goals. The organization's first building trades class of 10 men was a big success, with nine men graduating and seven being placed promptly in private-sector jobs. The city set that as the goal for future classes, only to find that was shooting too high.

In Lockport, no official goals are being set, but those involved in the course are confident that this could be their ticket to a good living.

Crawford, the Lockport instructor, used to work for DiSalvo Construction in Amherst. "I've built three houses on my own. I've flipped a couple of foreclosures," said Crawford, a Pendleton resident. "Initially, my father taught me construction."

After shadowing the Niagara Falls instructor for Isaiah 61, Dennis Luzak, he started the group's first Lockport class in September. The course lasts 500 hours, or about four months.

The students, ranging from 18 to 30 years old, were found through advertising in print and online, as well as recruiting efforts in city churches. The course is free and all materials are provided.

Some of them have some entry-level experience in certain types of work, but Crawford said, "We have people who have never used a circular saw before. What we stress here is safety, big-time."

Crawford said he will be the foreman when the class heads out to a job site. "Obviously in four months, 500 hours, you're not going to go into extreme depth on everything, but they'll get a taste of everything," he said.

The first part of the renovation job, if Isaiah 61 gets the house it expects to buy, will be to gut the house. Crawford said taking apart a house will show the men in reverse how things are built. They also will be erecting a 10-by-16-foot shed in the 3,000-square-foot space the class is using in Harrison Place.

"It's really a learning experience at every phase," Crawford said.