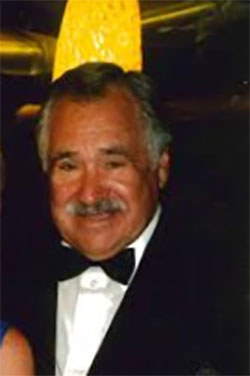 Angelo D. Lauria, founder and proprietor of Angelo’s Hair Stylist salons in the Buffalo area, died after a short illness Nov. 29 in Stuart, Fla., where he had a winter home. He was 85.

Born in Buffalo, he was a graduate of Seneca Vocational High School. He worked for a supermarket for a few years, then attended Roberts Beauty School.

Mr. Lauria opened his first hair salon, Michael Angelo’s, on Delaware Avenue in 1956 and eventually operated several in the area after his three brothers joined him in the business. His flagship salon was on Delaware Avenue near Gates Circle. In the 1960s, he also did hair shows for Revlon in downtown Buffalo. He retired in 1993.

“He just loved the people who came into his shop,” his daughter, Eleanor Sadlocha, said. “They became part of his life.”

A member of the Romulus Club, he took part in the annual Buffalo News Kids Day promotion for many years.

He built a summer home in Thunder Bay, Ont., which was the subject of a feature article in The Buffalo Evening News in 1968. He was a member of the Thunder Bay Homeowners Association and sponsored many softball teams in Thunder Bay.

“He loved building things and cooking,” his daughter said. “He could fix anything.”

He had been a cancer survivor for nearly 30 years.